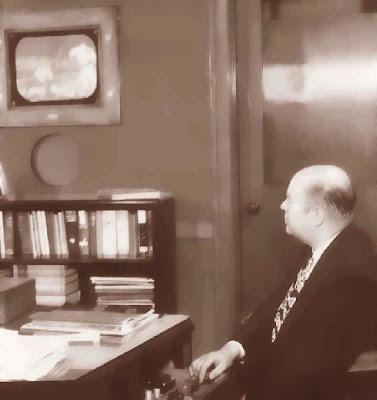 The New York Times
Thomas T. Goldsmith Jr., a pioneer of television technology who with his boss, Allen B. DuMont, and others in the nascent industry perfected the cathode ray tube that eventually let little wooden boxes with grainy black-and-white screens bring moving images into millions of homes, died on March 5 at his home in Lacey, Wash. He was 99.

The cause was complications of a hip fracture, his son Judson said.

On April 30, 1939, visitors to the World's Fair in Queens crowded around small fish-bowl-shaped screens of DuMont television sets to watch President Franklin D. Roosevelt — against a panorama of fountains and flags — officially declare the exposition open. Those televisions were largely made possible by the breakthrough work of Dr. DuMont, with his protégé, Dr. Goldsmith, by his side. At the time, fewer than 1,500 DuMont sets had been sold around the country.

"DuMont and Goldsmith helped pioneer turning oscilloscopes into full television displays," Alexander Magoun, the author of "Television: The Life Story of a Technology" (Greenwood Press, 2007), said in an interview Wednesday.

Dr. Magoun, who is also the executive director of the David Sarnoff Library, an archive for the Radio Corporation America, in Princeton, said that other scientists, including those at RCA, had also made advances in the use of the cathode ray tube.

"During World War II," Dr. Magoun said, "DuMont and Goldsmith shared their knowledge with RCA and other companies for using cathode ray tubes in radar displays and, after the war, for picture-tube displays."

Cathode ray tubes had already been used for nearly 30 years by scientists and engineers for oscilloscopes, devices that create a graphic display of electronic signals. An electron gun inside the oscilloscope shoots a beam of electrons at materials called phosphors coating the inside of the tube’s face plate, causing them to light up and allowing analysis of the electrical signal.

"But in television, if you remember black-and-white TV," Dr. Magoun explained, "you’re illuminating the entire picture tube screen so that you can watch moving video. DuMont and Goldsmith devised a variety of engineering and manufacturing techniques necessary to make that possible on a mass commercial basis."

Dr. Goldsmith was research director for the Allen B. DuMont Laboratory from 1936 to 1965. Dr. DuMont, who died in 1965, opened the laboratory in the garage of his home in Upper Montclair, N.J., in 1931; it later moved to a former pickle factory in Passaic. By 1947, with revenues from the sale of his television sets, he had started the DuMont Television Network. It had three stations at the time: WABD (later WNEW) in New York, WDTV in Pittsburgh, and WTTG in Washington. The last three letters of WTTG, which is now part of the Fox network, were chosen by Dr. DuMont to honor his protégé.

Thomas Toliver Goldsmith Jr. was born in Greenville, S.C., on Jan. 9, 1910, the younger of two sons of Thomas and Charlotte Manly Goldsmith. His father was an insurance and real estate broker, and his mother was a concert pianist.

After building crystal radio sets as a teenager, Dr. Goldsmith graduated from Furman University in Greenville in 1931. He received his Ph.D. in physics from Cornell in 1936. For his doctoral research, he needed to build an oscilloscope. He contacted Dr. DuMont, bought a cathode ray tube and began a correspondence that soon led to his hiring at the DuMont Laboratory. Dr. Goldsmith taught physics at Furman from 1966 to 1986.

Besides his son, he is survived by his wife of 70 years, the former Helen Wilcox; another son, Thomas III; a daughter, Virginia Beekman; six grandchildren; and 10 great-grandchildren.

The DuMont Television Network closed in 1955, partly because of a decline in sales of DuMont television sets, which had supported it. Five years later, the laboratory merged with Fairchild Camera.

The financial difficulties of the DuMont enterprises kept Dr. Goldsmith from making his mark in what decades later would be a booming industry. In 1947, he received patent No. 2,455,992 for a video game that allowed a player to shoot down an image of an airplane with a beam aimed at the screen.

"Here was an honored engineer in the television industry who worked for an undercapitalized company," Dr. Magoun said. "Here is an interactive television video game in 1947 that the company simply could not afford to take further, beyond the patent."
Posted by Mercury at 6:40 AM