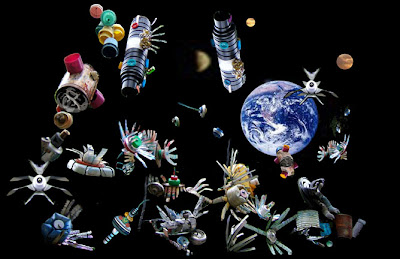 The New York Times
The three-man crew of the International Space Station climbed into the Soyuz spacecraft lifeboat for 11 minutes Thursday afternoon as a small but potentially dangerous piece of an old rocket motor whizzed past.

The space debris was about five inches wide and although the odds of a collision were small, “It’s enough we were worried about the crew, and they were taking an abundance of caution,” said Josh Byerly, a NASA spokesman.

Similar near-misses where the crew was at least prepared to enter the Soyuz have occurred five times since the station’s construction began in 1998, Mr. Byerly said. Usually, the crew can nudge the space station’s orbit out of the way of oncoming debris, but NASA received notice of the latest object late last night after the crew — Michael Fincke, Yury Lonchkov and Sandra Magnus — had already gone to sleep.

Instead, the crew members were instructed to evacuate the station and climb into the attached Soyuz module at 12:34 p.m. Eastern time. The space debris passed by at 12:39 p.m., and the crew emerged six minutes later.

Good reason to keep feet on the ground
Posted by Mercury at 4:31 PM

Thanks for the post, very good blog by the way. It sure would be terrible news if the little piece of space junk would hit ISS, so much money and effort had been put into it and such a little thing could destroy it. The Earth's orbit seriously needs to be cleaned out. All the debris that is just flying out there is bound to hit the ISS sooner or later. And then we can just prey it won't destroy it completely.