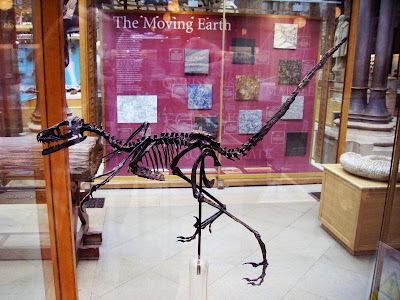 This is not good, but not new. Remember Sue the T. Rex?

Sue Hendrickson, amateur paleontologist, discovered the most complete (more than 90%) and, until 2001, the largest, Tyrannosaurus fossil skeleton known in the Hell Creek Formation near Faith, South Dakota, on 12 August 1990. This Tyrannosaurus, nicknamed "Sue" in her honor, was the object of a legal battle over its ownership. In 1997 this was settled in favor of Maurice Williams, the original land owner, and the fossil collection was sold at auction for USD 7.6 million, making it the most expensive dinosaur skeleton to date. It has now been reassembled and is currently exhibited at the Field Museum of Natural History.

Dinosaur experts are saddened but not surprised by the theft of a fossil.

NEWSWEEK
If you walk the hills and washes of the Hammond Ranch in north central Montana, you will, sooner or later, come across evidence of the creatures that preceded you here by 70 million years. They were duck-billed hadrosaurs, knobby-headed pachycephalosaurs, speedy raptors laid low amid their bloodthirsty frenzies. Their fossilized bones, buried for eons, are gradually emerging as the winter rains erode the surrounding soil. Femurs and tibias and skulls protrude from the steep walls of the gullies; the smaller bones wash out to where you can pick them up right off the ground. The trick is to tell them apart from rocks, which they strongly resemble. One test is to lick them, because bone, being porous, sticks to the tongue. But that's a slow way to find dinosaurs.

Nate Murphy, a self-taught, freelance fossil hunter, could stand at the base of a 60-foot cliff and notice a finger-size bone sticking out halfway up, a skill that amazed me when I saw him do it, as if he were spotting a dime on the sidewalk from across the street. Of course, I had to take his word that it was a bone. But Murphy, who ran a small research station and museum in the nearby town of Malta, was a bona fide expert, the discoverer in 2000 of one of the best-preserved large dinosaur fossils ever unearthed, a duck-billed brachylophosaurus he nicknamed Leonardo. While it was still in the ground, he proudly showed it off to the ranch owner, Howie Hammond. It looked to him, Hammond recalled, "like a big stain in the rock."

But in 2006, according to court documents, Murphy quietly dug up another spectacular fossil on the same ranch, a well-preserved skeleton of a bambiraptor. This is a fox-size, birdlike dinosaur, first identified in 1995 and still very rare. Murphy, who named the specimen Sid Vicious, allegedly spirited the skeleton off the ranch, lied about where he'd found it and arranged for casts to be made of the specimen, which he sold at a profit. (He pleaded guilty last week to a felony theft indictment.) Robert Bakker, a well-known field paleontologist, dubbed the skeleton "kleptoraptor" in an e-mail last week from Texas (where he was digging up a fin-backed dimetrodon). In court papers, Bakker estimated the value of Murphy's find at between $150,000 and $400,000.

It was a sad, but perhaps predictable, development; the trade in dinosaur bones can be as cutthroat as the one in diamonds. The theft "didn't surprise me," said Jack Horner, curator of dinosaurs of the Museum of the Rockies, in an e-mail. "There is a big difference between professional paleontologists who are in the field for science, and amateurs out to make money." The science writer "Dino Don" Lessem points out, though, that this rivalry is unique to the United States, where fossils are often caught up in conflicting claims among ranchers; state and federal governments (who may actually have title to the land); the person who discovers the fossil; and the museum that digs it up. In most other countries, Lessem says, the presumption is that fossils are public property.

Why are they so sought after, these gnarled, inanimate lumps of calcite? It's not their inherent beauty; most dinosaur fossils, after tens of millions of years underground, look pretty much like rocks. Some species, like bambiraptor and some of the big carnivores, are rare, but there are at any time hundreds of fossil dinosaur bones, dinosaur teeth, dinosaur footprints and dinosaur droppings for sale on eBay. The fascination with dinosaurs is largely a male phenomenon, although Sue, the largest tyrannosaurus skeleton ever excavated, was named after its discoverer, Sue Hendrickson. It's an affection acquired early in life—typically between the ages of 3 and 8, says Lessem. The great evolutionary theorist Stephen Jay Gould acquired his vocation around the age of 5, at the feet of a tyrannosaurus skeleton in the Museum of Natural History in New York. "Boys want to identify with their size and power," says Nora Cohen of the Web site ChildrensBookEditing.com, who says dinosaur books never go out of fashion. "Dinosaurs are compelling but not scary, because they're otherworldly." Perhaps that accounts for the fact that you don't find kids going nuts for woolly mammoths or dire wolves—comparably large and dangerous animals that have only been extinct for 10,000 years or so and whose threats may still linger somewhere in the human collective unconscious. (With all due respect to Young Earth creationists, whose beliefs will be triumphantly validated by finding a dinosaur skeleton with an arrowhead embedded in it. Keep looking, guys!)

And all of us grown-up boys can keep looking, too, even if we lack Murphy's perspicacity (but also, one hopes, his admitted streak of larceny). Dinosaurs were "the biggest, strangest, most exotic things that ever lived on land," says Lessem. And they lived on it for 150 million years, far longer than the brief reign of Homo sapiens at the top of the food chain. If there are intelligent beings alive 75 million years in the future, whose bones will they will find more interesting?
Posted by Mercury at 7:25 AM

Email ThisBlogThis!Share to TwitterShare to FacebookShare to Pinterest
Labels: Bambiraptor