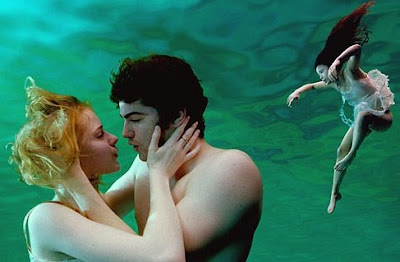 Has anyone seen Julie Taymor's Across The Universe and care to share thoughts?

"Lovers in the ’60s Take a Magical Mystery Tour"

From its first moments, when a solitary dreamer on a beach turns to the camera and sings, unaccompanied, the opening lines of the Beatles' song "Girl," Julie Taymor's '60s musical fantasia, "Across the Universe," reveals its intention to use the Beatles' catalog to tell two stories at once, one personal, the other generational. That young man, Jude (Jim Sturgess), is a cheeky Liverpool dockworker with a twinkle in his eye. He quickly emerges as a winsome vocal composite of John Lennon and Paul McCartney, with a personality to match.

That surrender is the kind of commitment that Ms. Taymor, a true believer in the magic of art, asks of an audience. And as the movie intensifies, and she brings in a fantastic array of puppets, masks and synergistic effects, you may find yourself in a heightened emotional state, even as you realize that what you’re seeing is unadulterated white, middle-class baby boomer nostalgia.

This risky hybrid of long-form music video and movie musical with clearly drawn characters tells the story of Jude's star-crossed love affair with Lucy (Evan Rachel Wood), a girl from upper-crust East Coast suburbia. It follows the couple as they are swept up and come apart in the evolving counterculture of left-wing politics, sex, drugs and rock 'n' roll.

The story, briefly: Jude, visiting the United States in search of his long-lost father, meets Lucy through her brother, Max (Joe Anderson), a student at Princeton, where the father is discovered working as a janitor. Max takes Jude home to his stuffy family for Thanksgiving, during which Max shocks his parents by announcing that he is dropping out of college. He and Jude drive to New York and settle in a sprawling East Village tenement and are soon joined by Lucy.

Their landlady, Sadie (Dana Fuchs, who played Janis Joplin in the Off Broadway show "Love, Janis"), is the movie's resident earth mother. An aspiring rock singer, she sounds like a warmer, more controlled Joplin. Her triumphal "Why Don't We Do It in the Road?" announces Lucy's arrival in New York, and later in the movie, her voice hoarsely shouting "Helter Skelter" rises above the mob during a Columbia University riot at which Jude is arrested.

Rounding out the bohemian household are Jo-Jo (Martin Luther McCoy), a guitarist who arrives from Detroit by Greyhound after his younger brother's death in the Detroit riots, and Prudence (T.V. Carpio), an Asian-American lesbian cheerleader who hitchhikes to New York from Dayton, Ohio, and (in a joke on a Beatles song title) crashes into the house through the bathroom window.

Jo-Jo, who suggests a softened Jimi Hendrix, becomes Sadie's on-again-off-again boyfriend and sometime lead guitarist. Prudence, who early in the film sings "I Want to Hold Your Hand" while gazing wistfully from afar at a blond cheerleader, develops a secret crush on Sadie. While Jude embraces art, Lucy, who lost her first boyfriend in Vietnam, gravitates toward antiwar activism after Max receives his draft notice and reluctantly leaves to fight in the war.

If the young lovers are familiar '60s archetypes, the actors' natural performances and the easy, colloquial dialogue by Dick Clement and Ian La Frenais ("The Commitments") allow the characters to transcend the generic. When Lucy, gazing at Jude, sings "If I Fell" very slowly, in a sweet, trembling voice, she is one girl worriedly fantasizing about one boy.

Most of the historical events are lightly fictionalized in a movie that maintains only the fuzziest of timelines. Its 33 Beatles songs (two without words) have been re-recorded and sung by the actors. Yet "Across the Universe" feels emotionally true both to the Beatles, whose music today seems to exist outside of time, and to the decade it remembers. Smart, uncluttered musical arrangements help reposition the songs to address the situation at hand. As a result, music that has congealed in collective memory — especially the clever, breezy early Beatles songs — emerges refreshed.

A visceral peak arrives with "Strawberry Fields Forever." In this gorgeous production number, an artwork by Jude in which rows of bleeding strawberries are pinned to a white surface transmutes into a hallucination of strawberry bombs raining over Southeast Asia. Then the artist, in an anguished frenzy, begins smashing strawberries on the walls and floors and destroys his work.

This happens around the time that Lucy, who works for a militant antiwar organization, angrily dismisses Jude's art as "doodles and cartoons." He charges into her office, snarls the song "Revolution" and instigates a brawl. It is one of several moments in which "Across the Universe" grasps a central emotional duality of a culture in which rage and ecstatic idealism clashed and played into each other at the same time.

Another extraordinary scene follows Joe to a United States Army induction center at which an Uncle Sam poster comes to animated life, leans down, points a giant finger and growls, "I Want You (She's So Heavy)." Inside the center a choreographed sequence finds inductees in their underwear sliding involuntarily along the floor through lines of Army officers in grim Expressionistic masks, marching in robotic formation. The new recruits are next shown, still in their underwear, lugging a giant replica of the Statue of Liberty through the Vietnamese jungle.

The dreamiest reverie, set to "Because," begins with a tableau of nine friends blissfully lying on their backs in the grass in a mandala pattern. The circle disperses as Jude and Lucy find themselves in a watery blue sky where clouds melt into liquid, and the entwined lovers are themselves floating underwater. Most fanciful of all is a largely animated sequence in which Eddie Izzard is Mr. Kite, the ringmaster of a psychedelic circus with a dancing chorus line of "the blue people."

Amid the phantasmagoria are several star cameos. As Max recovers from war injuries in a veterans' hospital, he has a morphine-induced fever dream in which the beds in his ward rear up from the floor to the song "Happiness Is a Warm Gun," and he is tended by five Salma Hayeks. Bono appears as the acid guru, Dr. Robert, a Ken Kesey-Neal Cassady fusion who sings "I Am the Walrus" at an acid-drenched party and conducts Jude, Lucy and a roiling band of Merry Pranksters on a delirious bus journey through a rainbow-colored countryside.

"Across the Universe," in the spirit of the counterculture, goes with the flow. Its scenes, songs and witty roughhouse choreography, spun off from the Beatles' movies "A Hard Day's Night" and "Help!," dissolve into a stream of consciousness with only occasional punctuation.

Because of its oh-wow aesthetic, its refusal to adopt a critical distance from the '60s drug culture, its tacit approval of the characters' antiwar activism and its token attention to the decade's racial strife, "Across the Universe" leaves itself wide open to derision, complaints and endless nitpicking. But it couldn't have succeeded any other way. The movie is completely devoid of the protective cynicism that is now a reflexive response to the term "the '60s."

"Across the Universe" believes wholeheartedly in the quaint, communitarian spirit it exalts. You share the joy of its blissed-out hippies in the grass. You feel the deepening friendship between Jude and Max that is sealed in Max's incandescent performance of "Hey, Jude." And during the time it lasts, the intoxicating passion of Jude and Lucy, both innocents by today’s standards, convinces, for a moment, that love is all you need.

"Across the Universe" is rated PG-13 (Parents strongly cautioned). It has nudity, sexual situations, drug use, mild violence and some strong language.

All in all, it sounds like some of the life and times of Mercury...

Email ThisBlogThis!Share to TwitterShare to FacebookShare to Pinterest
Labels: Across The Universe, cinema, Julie Taymor

i just ordered it from Netflix....it had better be superior to the last joke i watched "Mama Mia" which was based on an Abba soundtrack...or this blog is turned over to the authorities

Well Tim, it is probably even better than "Charlie Chan In Egypt".

Sent to me by stringer Tim:

"well about halfway thru the Universe.....i have had enough....it was Dear Prudence that did it in....molding the script to fit the song and very shallow at that...i feel the film was using an old....old....plot to exploit the Beatles genius or should i say musical mastery....the heroine was cute...the hero predictable as was the point where they drug in the TV for 24/7 coverage of the war.....the animation a rip off of Seargent Pepper and Yellow Submarine....no i would not see it again...."

Obviously you did not care for the film. You do bring up an interesting item I have observed in many "period films". The director just appears to be overwhelmed with the music of the era and that is the sole function of the film. Usually the film suffers any artistic merit. I felt this way with "American Graffiti"...the music was center stage.