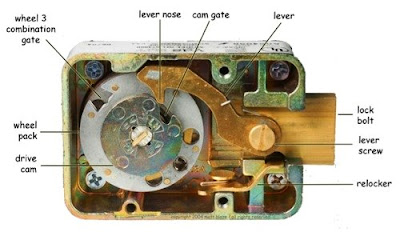 Few have heard of "Gentle Johnny" [John Ramensky] a famous and notorious Scottish safe cracker but he could well be a mentor for some college students taking a course on the "physics of safe cracking". I can see it now...college students wearing "Gentle Johnny" T-shirts. One doubts their reasoning when they say "...it's actually a way to entice high schoolers into a life of science." Are there better ways?

The National Archives of Scotland

Breaking and entering...in the name of physics

Los Angeles Times
"You’re learning to crack open a safe? This is a class?"

So what should a group of Los Angeles parents think when their kids come home from school and announce they've joined an international competition in safecracking and safe building—that their team will be involved in not only building a safe (a good skill) but breaking into those constructed by others (um, potentially a felonious skill)? Is this some nefarious way to train the next generation of high-tech criminals? Well, no, it’s actually a way to entice high schoolers into a life of science.

The Shalheveth Freier Physics Tournament of the Young@Science program at the Weizmann Institute of Science in Rehovot, Israel, is a fixture for that country’s high school junior and senior physics students, who can enter the contest as an equivalency for the physics exit exam. The competition is a magnet for high schoolers worldwide. Teams of five are welcome to enter—the only prerequisites are that they be enrolled in advanced physics classes and speak English and/or Hebrew.

Shira Epstein was a senior at Milken Community High School in Los Angeles when she entered in the spring of 2008. When asked how she heard about the competition, she said, "Through the grapevine." Turns out the contest is well known in the techie-science world.

How does it work? Epstein looks down, as if weighing how to convey the situation to the physics bereft: "Well, the contest is about creating a puzzle. Challenges are built in. The team came up with a concept for a safe, wrote the pro­posal and submitted it. The fun began when we had to build the actual safe. We did all the work ourselves." And in a time when schools rarely offer shop class—or have access to shop instructors—"what we didn't know, we had to learn ourselves, like drilling, soldering and sawing. It was DIY science!"

Front and center on the Milken team's safe (a Plexiglas box) was a joystick that seemingly controlled a claw mechanism. (Think of those coin-operated arcade attractions where you never actually grab a toy.) They, however, were diversions. In fact, there were two parts to solving the puzzle that scored you the combination to the lock that secured the safe—and both required knowledge of the principles of physics.

The first step involved retrieving a disk magnet at the bottom of the safe through a hole in the top (and no, turning over and shaking the safe was not part of the plan) by creating an electromagnetic field with a coiled copper wire affixed to the top of the box and the batteries inside. Part two required building a rudimentary speaker with the retrieved magnet and wires to hear the combination to the lock played on an iPod at the front of the safe.

How'd Milken do? "Came in 10th out of 30," Epstein said. Were there prizes just for finding the solution? "Well, we borrowed a large faux emerald from our school’s production of The Wizard of Oz, but the solvers couldn't keep it."

And far from the life of crime some might envision for a group of students intrigued by a safecracking competition, all of the Milken members who were seniors headed off to top universities: Epstein and Asher Vollmer attend USC; Daniel and Richard Dahan, one half of a set of quadruplets, chose MIT; and Jeffrey Gorman is at the University of Washington. David Bloch, now a Milken senior, will be helming the school's next safecracking team this spring. Let the competition continue.
Posted by Mercury at 8:11 AM