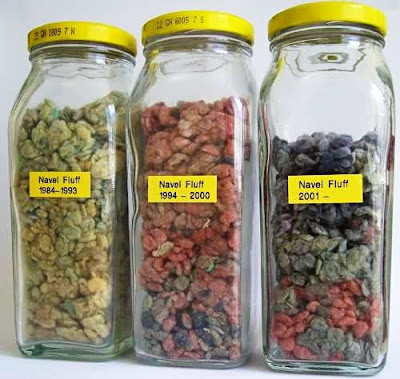 This looks like something that might be "pork" added to the Obama bailout package. It could also be an Ig Noble Award candidate.

In what must be the ultimate exercise in navel-gazing, an Austrian scientist has solved the mystery of belly button fluff.

Telegraph.co.uk
After three years of research, Georg Steinhauser, a chemist, has discovered a type of body hair that traps stray pieces of lint and draws them into the navel.

Dr Steinhauser made his discovery after studying 503 pieces of fluff from his own belly button.

Chemical analysis revealed the pieces of fluff were not made up of only cotton from clothing. Wrapped up in the lint were also flecks of dead skin, fat, sweat and dust.

Dr Steinhauser's observations showed that 'small pieces of fluff first form in the hair and then end up in the navel at the end of the day'.

Writing in the journal Medical Hypotheses, he said the scaly structure of the hair enhances the 'abrasion of minuscule fibres from the shirt' and directs the lint towards the belly button.

"The hair's scales act like a kind of barbed hooks," he said. "Abdominal hair often seems to grow in concentric circles around the navel."

The researcher, from Vienna University of Technology also asked friends, family and workmates about their own belly button fluff.

Dr Steinhauser established that shaving one's belly will result in a fluff-free navel - but only until the hairs grow back.

Other suggestions for keeping the navel fluff-free include wearing old clothes, as they tend to shed less lint than newer garments, which can lose up to one thousandth of their weight to the belly button over the course of a year.

A body piercing can also be used, with belly button rings particularly effective at sweeping away fibres before they lodge.

Dr Steinhauser, whose other projects have included monitoring the erosion of his wedding ring, said: "The question of the nature of navel fluff seems to concern more people than one would think at first glance."

"We hope we have been able to provide information for doctors when they are next confronted with the simple question of 'why some belly buttons collect so much lint and others do not'."

An earlier, Australian study of samples from 5,000 people concluded the typical carrier of navel fluff to be 'a slightly overweight middle-aged male with a hairy abdomen'.

Researcher Karl Kruszelnicki said: "The reason it is usually blue is that we mostly wear blue or grey trousers, often jeans, and when these rub against the body, the fibres often end up finding their way to the navel."

Not all belly button fluff is blue however. In the curious case of Australian hospital worker Graham Barker much of his fluff is red, even though he rarely wears the colour.

Mr Barker has been collecting his own navel fluff in jars every day since 1984. The achievement has won him a place in the Guinness Book of Records for the world's largest collection of navel lint.