Shuttle Discovery is ready to GO...finally 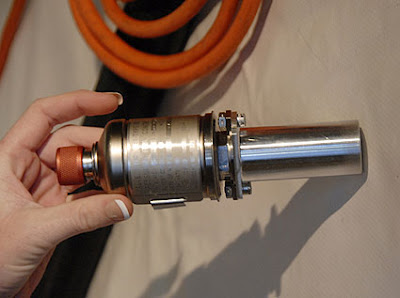 At NASA’s Kennedy Space Center in Florida, a technician holds one of Discovery’s gaseous hydrogen flow control valves after its removal. The valves channel gaseous hydrogen from the main engines to the external tank.
Finally, after days of postponement, the Shuttle Discovery is poised for a crucial trip to the ISS. I still question this whole shuttle operation and in the long run mankind's space exploration. The shuttle has been grounded due to some mechanical malfunction involving valves holding the liquid fuel. Suppose this happened in deep space or on the surface of the moon or Mars? Phrases like: "Engineers installed new seals in a fuel vent line, hoping that will solve the problem..." and "Technicians were unable to find the exact cause of the leak." are not satisfactory statements for sound sense of security and problem resolution for manned space flight. I hope all goes good this early evening.

Reuters
CAPE CANAVERAL, Florida (Reuters) -- NASA will try again on Sunday to launch space shuttle Discovery on a construction mission to the International Space Station after fixing a fuel leak that triggered a delay last week.

Engineers installed new seals in a fuel vent line, hoping that will solve the problem that postponed NASA's first launch attempt on Wednesday when hydrogen gas leaked from the shuttle's fuel tank, posing a fire hazard.

Technicians were unable to find the exact cause of the leak.

"I was a little surprised that we didn't find something more obvious because it was a healthy leak," shuttle launch director Mike Leinbach told reporters on Saturday.

Still, if the shuttle does not leak when it is fueled for flight on Sunday, it will be safe to fly, he added.

NASA has until Tuesday to launch the shuttle or face a delay until April 7 to avoid a schedule conflict with a Russia-led Soyuz mission to replace the station's prime crew.

Discovery will be carrying the fourth and final solar power module for the U.S. part of the station, a $100 billion project of 16 nations. The crew includes Japanese astronaut Koichi Wakata, who will be left behind to serve as a station flight engineer and the first Japanese to live on the outpost.
Posted by Mercury at 7:43 AM