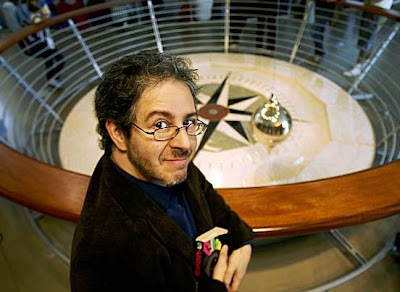 Scientists and philosophers are not always droll...they do have some fun and chuckle now and then. The current issue of Symmetry features the humor of physicist Brian Malow. Not a Richard Pryor or Mort Sol but as he says: "As one colleague put it, "Your jokes contain more information than other comics' jokes.""

"Women have passed through my life like exotic particles through a cloud chamber, leaving only vapor trails for me to study for clues to their nature."
"Science yuks"

Symmetry
If someone had told me when I was in high school that one day I would meet Stephen Hawking and have a meeting at NASA, I never could've guessed the trajectory I'd follow to get there. I would've assumed I had become a physicist.

I was good at—and enjoyed—math and science, but I couldn't decide if I wanted to be a scientist or a rock star (not that there is a difference!) I ended up taking the arts path, but rock star morphed into stand-up comedian.

Most comedians dream of "making it" in nightclubs and theaters. Corporate gigs and private events, while often lucrative, are considered sellouts, because you can't do anything remotely provocative. You have to edit yourself or risk not getting paid—or worse, not getting laughs.

I've never been particularly dirty. My act has always reflected my love of science, drawing on its language and concepts for analogies and metaphors. My sensibilities were shaped more by Asimov and Clarke than Carlin and Pryor. I'm geekier—and I say that proudly—than the average comedian. As one colleague put it, "Your jokes contain more information than other comics' jokes."

A few years ago I had a revelation: I was editing myself more in the comedy clubs than at certain private gigs. Some of my favorite routines were gathering dust because the typical nightclub audience isn't likely to laugh at a joke whose punch line invokes the inverse-square law.

But, at shows for Apple or Microsoft or Stanford—when my audience contained a critical mass of engineers and science enthusiasts—I could wax scientific in the voice that was most colorful and entertaining to me. I could crack a joke about cloud chambers and it would be greeted with laughter and appreciation.

It was gratifying. It was as if I'd grown up speaking a foreign language and then one day found myself in a land where the people spoke that language. It was like coming home.

I decided to really focus on science comedy, to seek out and bond with the complementary audience I knew was out there—the adenine for my thymine, the guanine for my cytosine. I concentrated on performing for science organizations, museums, festivals, medical and technology companies, and conferences.

I've been thrilled by the response.

At public outlets of the National Academies, increasingly large crowds have shown up, curious to check out the "science comedian." They seem as excited and grateful to have found me as I am to have found them.

And I'm pleased to report empirical evidence that scientists do, in fact, have a sense of humor. True, they sometimes have a tendency toward literal interpretations—like when I compared the 125-degree heat in Arizona to the surface temperature of Venus, and a loud voice in the room countered, "No!"

Of course Venus is much hotter than that. I was employing a comedic device known as exaggeration. Other comedians just have to be funny. They don't have to strive for scientific and mathematical accuracy. I do, or the audience will dissect me.

I also reach out to general audiences, hoping to dispel the fallacy that science is dull or impenetrable, by using humorous analogies and radiating enthusiasm.

During a recent appearance at the Koshland Museum of the National Academy of Sciences in Washington, DC, an impassioned argument I made in favor of the manned space program led to a meeting at NASA headquarters and an invitation to attend an exclusive lecture by Professor Hawking. At the reception afterwards I met him, spoke with him, even told him a couple of jokes.

Quite suddenly, I'm meeting and entertaining some of the most interesting people on the planet—physicists, chemists, rocket scientists, cell biologists, entomologists…heroes. And not just the famous ones, but people who are quietly advancing the frontiers of science.

I'm thriving in the ecological niche to which I'm peculiarly adapted. And I'm constantly exposing myself to new information, expanding like the universe.

Email ThisBlogThis!Share to TwitterShare to FacebookShare to Pinterest
Labels: Brian Malow and humor