And so the arts suffer too 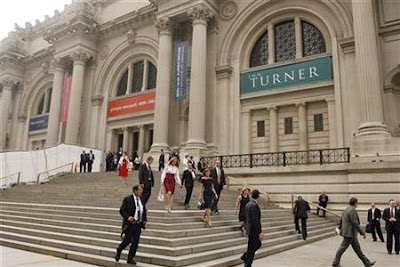 And, it will get worse especially in smaller communities...the Concrete Dinosaur Museum in rural America may have to close.

"U.S. museums cutting back due to recession"

Reuters
NEW YORK (Reuters) - Museums in New York and Philadelphia are cutting jobs, slashing salaries and closing stores because their endowments have been pounded by declines in donations, government aid and investment returns.

The Metropolitan Museum of Art is closing 15 of its merchandising stores across the United States, leaving only eight stores open in New York. It will cut about 250 jobs, or 10 percent of its workforce, before July 1.

The museum, founded more than 130 years ago and prominently located alongside Central Park, has lost about $800 million from its endowment since mid-2008, when it was worth about $2.9 billion, spokesman Harold Holzer said. There were no plans to cut exhibits.

"It's a very strange economic climate we are in," Holzer said.

The Met is a nonprofit institution whose funding sources include its endowment, government aid, private donations and admission revenues.

Holzer said that based on endowment losses alone, the Met would have to cut $2.2 million from its $220 million operating budget in the next fiscal year. He added that cuts in the operating budget could total up to $20 million, taking in retail cutbacks and other losses.

The Academy of Natural Sciences in Philadelphia announced a hiring freeze on Friday and said it would cut salaries by 5 percent. Its endowment and other investments dropped to less than $40 million from $60 million in early 2008.

Attendance was down at both museums as art lovers tightened their belts during the global recession. The Met said foreign visitors, who are more likely to pay the suggested $20 voluntary admission fee, also dropped.

"People have less money to spend on cultural and educational experiences," the Academy of Natural Sciences said in a statement.

Other museums in the United States have laid off workers or predicted they will be forced to fire staff.

The Museum of Contemporary Art in Los Angeles almost had to close until billionaire philanthropist Eli Broad came up with a $30 million rescue plan in 2008.

The well-funded Getty Trust that operates museums in Southern California has frozen hiring and salaries.

In New York, the Museum of Modern Art implemented a hiring freeze in October and ordered a general operating budget cut of 10 percent. Other major museums in the city declined to discuss whether they had suffered endowment losses or had plans for layoffs or salary cuts.
Posted by Mercury at 7:09 AM

Email ThisBlogThis!Share to TwitterShare to FacebookShare to Pinterest
Labels: economic problems for the arts, museums