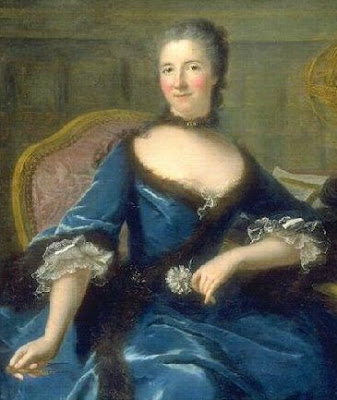 "Emilie du Châtelet: the genius without a beard" 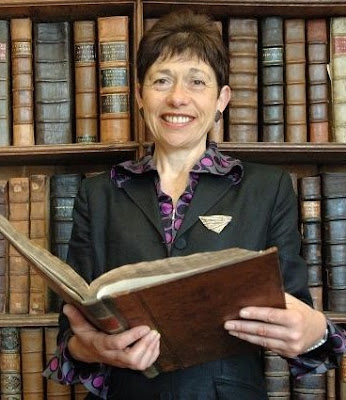 Encouraged by Voltaire, the 18th-century aristocrat Emilie du Châtelet led a covert scientific career that culminated in the first French translation of Newton's Principia. However, as Patricia Fara reveals, Du Châtelet has been unfairly cast as just Voltaire's mistress

According to Francois-Marie Voltaire - Enlightenment France's great writer and philosopher - Emilie du Châtelet "was a great man whose only fault was being a woman". Du Châtelet has paid the penalty for being a woman twice over. In her own lifetime she fought for the education and the publishing opportunities that she craved. Since her death, she has been cast in the shadow of two men - Voltaire, with whom she lived and studied, and Isaac Newton, whose work she criticized and interpreted. Her translation from Latin of Newton's Principia, his great work on gravity, remains the only complete version in French.

For more than two centuries, Du Châtelet (1706-49) has been cast as Voltaire's mistress, as though she were his possession or at best an intelligent secretary. But Voltaire himself knew better - he celebrated her as a "great and powerful genius". Together they wrote Elements of Newton's Philosophy (1738), an extremely influential book that persuaded French experimenters to abandon their own national hero, René Descartes, and pledge allegiance to Newton instead.

Although only Voltaire's name was on the title page, he paid tribute to Du Châtelet's scientific superiority – their book's frontispiece (shown) envisages her hovering above his head, casting Newton's divine wisdom down onto his hand. Du Châtelet's mirror identifies her as the goddess of truth, while Voltaire sports a poet's laurel wreath as he assiduously transcribes the words of his female muse. "She dictated and I wrote," he told a friend.

Faced with overt exclusion from academic circles as well as ingrained doubts about her own ability, Du Châtelet was caught between conflicting, unsatisfactory stereotypes - the learned eccentric, the flamboyant lover, the devoted mother. Too many biographers have plumped for one or another of these hackneyed models, rather than listening to her quiet insistence of being "in my own right a whole person".

"Judge me for my own merits," protested Du Châtelet - but how should this be done?

Judging her by modern standards is not a valid approach. Women in the 18th century had virtually no educational opportunities and were believed to be intellectually as well as physically inferior to men. Just as importantly, there were no conventional career tracks to follow even for men who wanted to study science; like women, they had to carve out their own routes to success, especially if they were not born into rich families.

Trapped between the sexes, Du Châtelet conformed to the expectations of the time by loving to shop, dance and entertain. But she also transgressed social norms by dedicating herself to Newtonian natural philosophy. When submission deadlines were close she scarcely slept, plunging her hands into ice-cold water to keep herself awake.

In addition to her scientific research, she wrote and translated works on other subjects, such as ethics, the Bible and Greek poetry. The German philosopher Immanuel Kant admired her intellect, yet sneered that "a woman who conducts learned controversies on mechanics like the Marquise de Chatelier might as well have a beard".

Like many clever women today, even in the midst of achievement she lacked self-confidence - "God has refused me any kind of genius," she once confided. Despite her unconventional lifestyle, Du Châtelet still performed the traditional time-filling tasks expected of a wife and mother. Some of these she imposed on herself, but in other cases it seems that she yielded to pressure from her contemporaries, as if conditioned from birth into a form of psychological captivity. But she encouraged women to foster their own happiness by studying "to console them for everything that makes them dependent on men".

Obviously brilliant as a child, Du Châtelet resented the discrimination that made it impossible for her to pursue the same career as a man. Born into a wealthy aristocratic family, she benefited from an enlightened father. Instead of sending her to a convent school he decided that she should be taught at home, and she received the sort of education that was more typical for boys. She could apparently speak six languages when she was only 12, but it was not until she reached her late 20s that she started to immerse herself in Newton's ideas. These were still extremely controversial: the Jesuits controlled France's education system, and their Cartesian science based on swirling vortices of tiny particles reigned well into the second half of the century.

By the time that she started to tackle Newton, Du Châtelet was married to an older army officer, had given birth to three children, and was simultaneously developing friendships with two other men. She persuaded one of them to teach her mathematics privately, and fell passionately in love with the other, Voltaire. He was in serious trouble, hunted by the police because of his unpatriotic political views, and Du Châtelet sent him off to hide at her country estate. The next summer she joined him there, and for 15 years they lived together, embroiled in a private world of intense intellectual activity entwined with romance.

Their first priority was to stock their library. They amassed 21,000 books - more than in most European universities - and they each had separate rooms packed with scientific equipment. Du Châtelet took over the great hall, where she tested Newton's theories with wooden balls swinging from the rafters and metal apparatus forged from the nearby iron mines.

In 1738 Voltaire published their extraordinarily successful Elements of Newton's Philosophy. Well illustrated, it clearly explained the basic principles of Newton's discoveries in mathematical astronomy and optics, so that for the first time the new physics became accessible to a wide range of French people. Voltaire hero-worshipped Newton but recognized that he himself could not match Du Châtelet intellectually. "I used to teach myself with you," he wrote 10 years later, "but now you have flown up where I can no longer follow."

Du Châtelet grappled with the philosophical relationships between the Cartesian, Leibnizian and Newtonian systems. Unlike Voltaire, she believed that good science needs metaphysical foundations. Newtonianism, she pointed out, purports to be based solely on experimental observations, yet inevitably entails metaphysical assumptions about the existence of scientific laws. For about a year and a half she prepared a new manuscript, Foundations of Physics, in which she tried to integrate the ideas of Descartes, Leibniz and Newton.

A tough world for female scholars

Du Châtelet wrote in complete secrecy, trapped in a dilemma: she desperately needed constructive criticism, but risked painful mockery by revealing that a woman was daring to engage in such innovative work. Many female scholars experienced similar conflicts. Almost 100 years later, the English mathematical physicist Mary Somerville was working on a mirror-imageproject - elucidating for an English audience the cosmological ideas of the self-styled "French Newton", Pierre Laplace. "I hid my papers as soon as the bell announced a visitor," Somerville confessed, "lest anyone should discover my secret." Although she doubted her own genius, Somerville was valued so highly that an Oxford college was named after her.

By welding together three conflicting systems, Du Châtelet suggested a novel yet welcome approach. Helped by the book that Du Châtelet and Voltaire had published earlier, Newtonian ideas were spreading through Europe, but there were fundamental clashes between the clockwork universes proposed by Europe's three most eminent natural philosophers. By incorporating Leibnizian ideas about active substances, Du Châtelet helped to forge a new version of Newtonian physics that resolved the problems of describing force and movement. Published anonymously, her book received glowing reviews in prestigious journals.

Finally she embarked on her most ambitious project - translating Newton's Principia into French. Because the English translation was faulty, she worked directly from the original Latin. For Du Châtelet, translation meant more than just converting words into another language. She believed that she should create her own version of a text, one that incorporated her own ideas as well as those of the original author. Constrained by family duties, her work was intermittent - but it was very thorough.

Du Châtelet decided to undertake not only the literal translation of the text itself, but also three types of interpretation. For newcomers she converted the complex mathematics into elegant prose, supplemented by her own examples. Next, she turned to calculus, translating Newton's geometry into the new continental algebra. Finally, she summarized recent mathematical research and experimental vindications of Newton's theories.

But to her dismay, Du Châtelet discovered that she was pregnant. Then aged 43, she was an elderly women by contemporary standards. Although Voltaire was not the father, he helped Du Châtelet deceive her husband into thinking that the baby was legitimate. Plagued by gloomy premonitions, Du Châtelet intensified her work schedule, working 18 hours a day to finish in time. Although she did succeed, she died soon after the baby was born. On her last day she recorded the date on her Newton commentary. Her Principia was published 10 years later, in 1759, to coincide with the return of a comet vindicating Newton's physics.

Good translations are vital for spreading new ideas, and modern international science could not have developed without them. To understand how science came to form the backbone of our modern world, we need to describe not only what happened inside laboratories and libraries, but also what happened outside. Science now dominates popular media as well as educational syllabuses, but this is only because female teachers, editors, illustrators and translators - women like Du Châtelet - enabled scientists and students to learn about the latest research. Understanding science's past entails recognizing and crediting their involvement. Women made different contributions from men, but different need not mean insignificant.

[Patricia Fara is a fellow of Clare College, Cambridge. This article is based on a chapter in her book Pandora's Breeches: Women, Science and Power in the Enlightenment.] 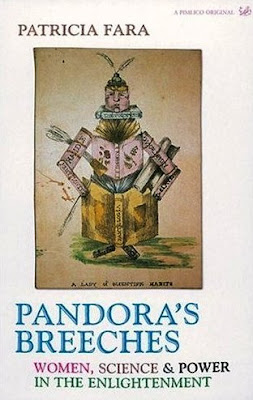 Pandora's Breeches: Women, Science and Power in the Enlightenment

Joyce Myron...what happened to her?

"The Mother of Nuclear Fision"

"under the microscope"...venue for women science writers

Women in physics...an essay of importance
Posted by Mercury at 11:49 AM

I came to mathematics by way of my own Voltaire.
Newton was to Emilie, what Google is to us today. How most fortunate are we to have access to such high standards in academia. I smile that I have just noticed Emilie loved blue. I think of Emilie as an example and a mentor. I believe Emilie felt the same way about Voltaire - they learnt of each other. Of all the Supply Chain Management books I have in my office -books that inspire me; Emilie du Chatelet, has imprinted.
I understand she was challenged, her portraits speak volumes.