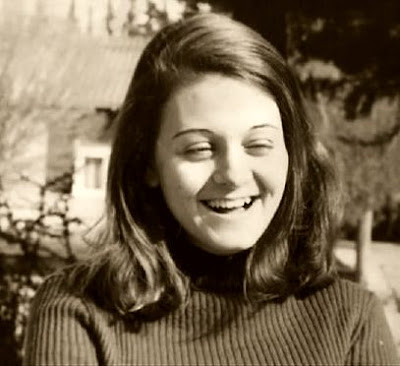 In this undated photo released by the family of Ana Teresa Diego, Ana Teresa Diego, a 22-year-old astronomy student who was kidnapped on Sept. 30, 1976 from the library of the National University of La Plata, Argentina during the Argentina's 1976-1983 military regime, is seen in an unknown location. The International Astronomical Union decided to name an asteroid "Anadiego" in her honor. The International Astronomical Union's Committee on Small Body Nomenclature agreed that Diego "was an excellent student at La Plata Astronomical Observatory in the 1970s who also had a strong social commitment and gave her life in defense of freedom." The asteroid was discovered in 1975 by Argentine astronomer Mario Cesco and is located in the main asteroid belt between Mars and Jupiter, orbiting the sun every 4.1 years.

Associated Press
For 35 years, Zaida Franz has not been able to find her daughter, a girl who dreamed of becoming an astronomer and then disappeared without a trace. Now she at least has an address she can think about — out in space.

"My dearest daughter, at last I can write to you, now that I have a place to find you: Asteroid 11441, between Mars and Jupiter," she wrote in an open letter this month.

"Anadiego," honoring Ana Teresa Diego, is the first asteroid to bear the name of a victim of Argentina's 1976-1983 military regime, which eliminated thousands of dissidents in its crackdown on political dissent. Most were kidnapped, tortured and summarily executed, their bodies disposed of in anonymous graves. Others were drugged and thrown alive from planes miles off the coast.

Argentina's renowned forensic anthropology team has been able to recover and identify only 510 bodies, a small percentage of the thousands of disappeared. In all, 13,000 people were killed, according to the official tally, although human rights groups say the total is closer to 30,000.

Naming the asteroid after her daughter, Franz said, helps "fill an emptiness" she has felt ever since the abduction.

"I never found out where Ana's body was," she said. "Now I know that she is in an asteroid with her name. Not only her, but all of the disappeared."

Ana was 22 when she was abducted while studying at the National University of La Plata.

"It struck me as a good idea to name an asteroid after a student who wanted to become an astronomer and had fought for her ideals," said Adrian Brunini, the university's dean of astronomy. He was the one who proposed baptizing as "Anadiego" an asteroid discovered in 1975 by Argentine astronomer Mario Cesco.

President Cristina Fernandez, who studied law in La Plata in the early 1970s, honored Ana in her address to Congress as she began her second term this month.

"That young woman could have been sitting where I am seated now," Fernandez said, urging the justice system to speed up human rights trials and "definitively turn a tragic page in our history."

"Anadiego" lies in the main asteroid belt between Mars and Jupiter, orbiting the sun every 4.1 years. Asteroids are remnants from the birth of the solar system some 4.5 billion years ago.

The International Astronomical Union's Committee on Small Body Nomenclature agreed that Diego "was an excellent student at La Plata Astronomical Observatory in the 1970s who also had a strong social commitment and gave her life in defense of freedom."

The naming committee, with representatives from a dozen countries, usually prohibits naming asteroids for modern figures or events with political connotations. But exceptions have been made for cases relating to human rights. Asteroids have been named after German anti-Nazi dissidents, and one even bears the name "Madresplazamayo," referring to the Argentine human rights group.

"This wasn't an arbitrary selection from among the tens of thousands of disappeared. It seemed natural that astronomers would pay homage to a member of the scientific community," said Uruguayan astronomer Julio Angel Fernandez, Latin America's only representative on the committee.

Friends and colleagues say Diego divided her time between studying and political advocacy with the Communist Party. She had won a scholarship to study astronomy in Europe, but decided to stay in the university city, a center of student protest and idealism in the early 1970s.

Diego took part in assemblies, distributed pamphlets and often painted slogans on walls, but the party did not advocate violence and her family and friends say she never took part in armed actions or terrorist activities.

"We both liked mathematics and physics, but we didn't talk much about astronomy. When we weren't talking about politics or the difficult situation of the killings and disappearances of our friends and colleagues, we talked about our families. Ana greatly admired her father, a mathematician who died in 1975," recalled Carmen Nunez, a friend and fellow activist.

"The day she was abducted we had left the observatory together. ... Ana remembered that she had forgot to hand in a practical exercise to a professor and decided to go back. I went to a meeting ... and not more than half and hour had passed when someone came running to say that Ana had been taken away in a car without plates. We never saw her again," Nunez said.

Other detainees later said the young woman was taken to a clandestine detention center and tortured for information on fellow militants.

Nunez said she doubts her friend would have talked. "She had very defined ideas and defended them convincingly," she said.

Many detainees were buried anonymously in public cemeteries or in clandestine graves on military or police bases. Some were sedated and thrown alive from military planes into the wide Rio de la Plata river that runs between Argentina and Uruguay.

Evidence of these "Death Flights" was recently provided to Argentina's justice system by the Inter-American Commission on Human Rights. The long-secret archives included more than 100 photos of bodies that washed up on the Uruguayan coast bearing signs of torture.

While some South American democracies have hardly begun to come to terms with the legacy of their dictatorships, Argentina is trying hundreds of former military and police officials for crimes against humanity.

"The justice system is putting on trial those responsible for the genocide. Who would have believed that? I'm telling you that in the last few years there have been many changes," Franz wrote in the letter, listing her address as Villa Ventana, Planet Earth.

"I close my eyes and I see you as a little light in the asteroid, together with all the disappeared who look down on us and greet us with smiles. I feel as though you're OK, happily waiting for us and confident that this humanity will find a way to live in peace, solidarity and harmony."
Posted by Mercury at 9:51 AM

Is there any chance at all that this woman is still living? Are there any known survivors from those kidnappings?

It's great to see the IAU do something good. This is the type of thing they should be doing.

I doubt it Laurel. It has been a long time and Ana Teresa Diego has just vanished along with thousands of others. It is a good move by the IAU.