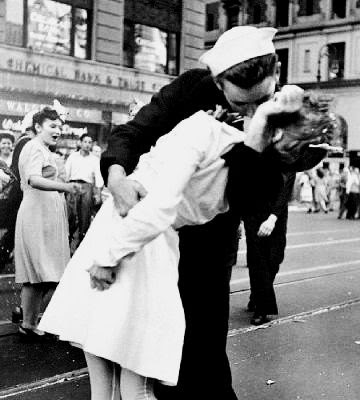 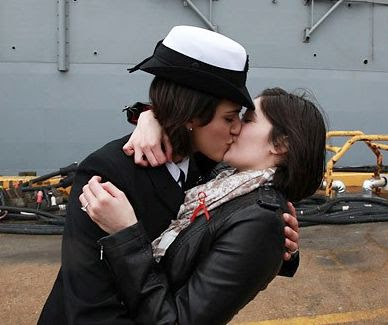 Time
Another victory for those who pushed to repeal the military’s “Don’t Ask, Don’t Tell” law emerged Wednesday as a same-sex couple took part in the coveted “first kiss” tradition following a Navy ship’s homecoming.

As the USS Oak Hill docked in Virginia Beach, Citlalic Snell stood on terra firma, anxiously awaiting her girlfriend Marissa Gaeta’s arrival. The couple was set to share the traditional first kiss as the sailors disembarked, marking the first time a gay or lesbian couple has taken such an honor. Of course, this might sound like a well-timed publicity stunt, considering DADT’s repeal just three months ago. But alas, it was not: the couple won the opportunity in a raffle. The “first kiss” is often given out in a raffle or competition to a fleet of sailors arriving home. It’s a Navy tradition, that Gaeta could now compete for.

And her $50 investment for the $1 raffle tickets paid off. Gaeta, a 22-year-old Petty Officer 2nd Class, was the first to descend from the ship and into the arms of Snell, 23 and also a naval officer, on break from her duty aboard the destroyer USS Bainbridge. “This is the first time we can actually show who we are,” she told reporters after the smooch. Gaeta had been deployed to Central America for more than two months.

The women, who’ve been dating for two years, first met at training school, where they were roommates. Both are Navy “controlmen” who help operate the ship’s weapons. They note they had to hide their relationship for a while. “A lot of people were not always supportive of it in the beginning,” Snell said. But thanks to the long-fought repeal finally coming on September 20th, those times are history – and the couple’s smooch is making history of its own.

Theirs is a romantic embrace captured on camera that’s been compared to the iconic V-J Day kiss photograph. Gaeta’s lean and supportive pose echo the image snapped by LIFE photographer Alfred Eisenstaedt in 1945, with all the same passion and emotion. Though Wednesday’s kiss is one that represents so much more to gay and lesbian couples in the military: equality.
Posted by Mercury at 9:21 AM