The IAU will have a problem now...asteroid or dwarf planet--VESTA 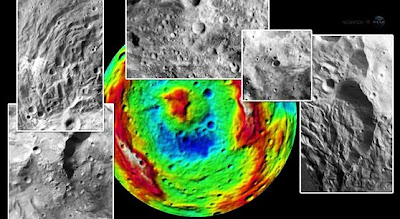 Like Earth and other terrestrial planets, Vesta has ancient basaltic lava flows on the surface and a large iron core. It also has tectonic features, troughs, ridges, cliffs, hills and a giant mountain. False colors in this montage represent different rock and mineral types.

"Is Vesta the "Smallest Terrestrial Planet?""

NASA
Vesta was discovered over two hundred years ago but, until Dawn, has been seen only as an indistinct blur and considered little more than a large, rocky body. Now the spacecraft's instruments are revealing the true complexity of this ancient world.

"We're seeing enormous mountains, valleys, hills, cliffs, troughs, ridges, craters of all sizes, and plains," says Chris Russell, Dawn principal investigator from UCLA. "Vesta is not a simple ball of rock. This is a world with a rich geochemical history. It has quite a story to tell!"

In fact, the asteroid is so complex that Russell and members of his team are calling it the "smallest terrestrial planet."

Vesta has an iron core, notes Russell, and its surface features indicate that the asteroid is "differentiated" like the terrestrial planets Earth, Mercury, Mars, and Venus.

Differentiation is what happens when the interior of an active planet gets hot enough to melt, separating its materials into layers. The light material floats to the top while the heavy elements, such as iron and nickel, sink to the center of the planet.

The story begins about 4.57 billion years ago, when the planets of the Solar System started forming from the primordial solar nebula. As Jupiter gathered itself together, its powerful gravity stirred up the material in the asteroid belt so objects there could no longer coalesce. Vesta was in the process of growing into a full-fledged planet when Jupiter interrupted the process.

Although Vesta’s growth was stunted, it is still differentiated like a true planet.

"We believe that the Solar System received an extra slug of radioactive aluminum and iron from a nearby supernova explosion at the time Vesta was forming," explains Russell. "These materials decay and give off heat. As the asteroid was gathering material up into a big ball of rock, it was also trapping the heat inside itself."

"We think Vesta had volcanoes and flowing lava at one time, although we've not yet found any ancient volcanoes there," says Russell. "We're still looking. Vesta's plains seem similar to Hawaii's surface, which is basaltic lava solidified after flowing onto the surface.

Vesta has so much in common with the terrestrial planets, should it be formally reclassified from "asteroid" to "dwarf planet"?

"That's up to the International Astronomical Union, but at least on the inside, Vesta is doing all the things a planet does."

If anyone asks Russell, he knows how he would vote.
Posted by Mercury at 3:34 PM

I dispute the notion that the classification of Vesta or of any other celestial body is "up to the International Astronomical Union." First, the majority of IAU members are not plantetary scientists but other types of astronomers. Wouldn't it make more sense for such decisions to be made specifically by those who study planets professionally? Second, the IAU has still not instituted electronic voting, meaning anyone who cannot attend the General Assembly, which will be in Beijing in 2012, cannot vote at all. Additionally, given all the discoveries we are making, it is clear we are just beginning to learn about these smaller bodies--not to mention we're just beginning to learn about exoplanets and haven't even begun to discover the smaller ones. This means we do not need a "final" or narrow definition of planet, dwarf planet, etc. set in stone; much more appropriate is an open-ended concept that recognizes the huge spectrum of objects ranging from tiny asteroids and comets to brown dwarfs and also recognizes we are only beginning to really understand these objects. It makes no sense to draw an arbitrary line and say, these are planets; these are not when such arbitrary lines run counter to the reality of what is out there. Most ridiculous is the notion that dwarf planets are not planets at all, which the IAU has continued to refuse to address since 2006.

Why not consider a planetary classification scheme similar to the Herzsprung Russell Diagram used for stars, which encompasses a wide variety of types, luminosities, ages, etc. while recognizing that all these diverse objects fall under the broad category of "star?"