Not scif, but physics...when the Mississippi River ran backwards 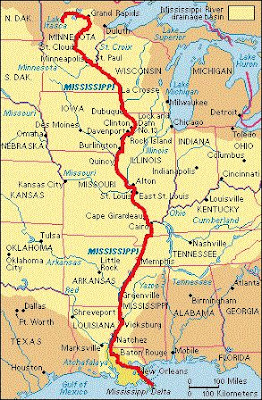 The strange story of the massive 1811-12 New Madrid earthquakes, and why Midwesterners still haven’t gotten over them.

Slate
There was plenty I didn’t know about Missouri before I moved to St. Louis in 2007, but one of the things I did know, or thought I knew, was that the state was the site of the largest continental earthquake in U.S. history—a seismic event more powerful than even the San Francisco earthquake of 1906.

The first in the series of three New Madrid earthquakes occurred 200 years ago today, in the early morning of Dec. 16, 1811, in what was then a sparsely populated town in the Louisiana Territory, now the Missouri Bootheel. The second occurred on Jan. 23, 1812, and the third—believed to be the strongest—on Feb. 7, 1812. Countless major and minor aftershocks followed.

New Madrid’s population in 1811 hovered around 1,000: farmers and fur traders and pioneers, French Creole and Native Americans who used the Mississippi River for commerce and transportation. Accounts from people who experienced the quakes firsthand have a biblical flavor: The land undulated; chasms opened and swallowed horses and cows whole; the Mississippi ran backward; and smoke, sand, and vapor obscured the sun. Because of the Midwest's comparatively stiff and cold lithosphere, tremors could be felt at a much greater distance than in coastal quakes, giving rise to tales of stopped clocks in Natchez and tinkling chandeliers in Washington, D.C.

So ghastly and spectacular were these details that in 2009, I decided to start writing a novel set in the present day but inspired by the 1811-12 temblors. The only problem, as I discovered while conducting research, is that many of the details might not be true.

Over the years, estimates have placed the 1811-12 quakes’ magnitudes anywhere from under 7.0 to 8.5—an enormous range given that one additional unit of magnitude makes an earthquake 10 times stronger. There now seems to be widespread acceptance that the quakes weren’t stronger than magnitude 8, but beyond that, I’ve heard conflicting figures.

And that’s hardly the only contentious issue surrounding the New Madrid (pronounced MAD-red) Seismic Zone. There’s also the question—significant to those of who live in the area—of whether the fault could still unleash another Big One (or three) or whether it has essentially shut down.

In the past 20 years, GPS equipment monitoring the fault has recorded little of the movement that would be expected if it were still active, as Northwestern geology professor Seth Stein describes in his engrossing 2010 book Disaster Deferred: How New Science Is Changing Our View of Earthquake Hazards in the Midwest.

Stein suggests there are financial incentives for engineers and institutions that are government-funded or would otherwise benefit from the cost of retrofitting buildings and pipelines to inflate the threat of future quakes. It’s not that there’s no hazard, according to Stein, but when there’s only so much money to go around, it’s an inappropriate allocation of resources to act as if a big earthquake is as likely in Missouri as in California. The counterargument, put forth by agencies such as FEMA and the U.S. Geological Survey, is that it’s impossible to know, and in the face of uncertainty, cities and individuals ought to prepare. The 1811-12 sequence is believed to have been the third set of quakes to occur in roughly 500-year intervals, and this pattern could indicate that the fault “has several more pops left in it,” as John Vidale, a University of Washington geologist, told me. Earlier this year, Vidale led a team that evaluated multiple studies of the fault.

If those holding opposing viewpoints are unlikely to come to an agreement anytime soon, the public is, in a rather weird way, splitting the difference. People I know aren’t preparing for another major quake in practical ways—holding family earthquake drills or stockpiling emergency supplies—but they’re far from ready to accept that the fault has shut down.

St. Louis is about 170 miles from New Madrid, and logically, those of us within shaking distance of the fault should be relieved by evidence that it no longer poses a threat, but in both media coverage anticipating the 200th anniversary of 1811 and in conversations I’ve had, it’s clear that people are reluctant to accept that the danger has passed. As a novelist, I can think of reasons why I’d prefer for the fault to still be active, just as I’d prefer for the 1811-12 quakes to have been record-breakingly strong—because it makes the book I’m writing juicier—but as a person who lives in St. Louis in a brick house, I’m hugely relieved by the data of Seth Stein.

So why do so many other Missourians, most of whom are not, I suspect, writing novels, seem strangely disappointed by and even defensive about this potential downgrading of a natural disaster? Maybe, in our age of nonexistent weapons of mass destruction and sham celebrity weddings, it’s just hard not to be cynical. Or maybe it’s that Midwesterners know we’re not considered particularly interesting by the nation as a whole, and we’re loath to lose one of our few marks of distinction. (Already, Missouri jeopardized its status as a bellwether state with the 2008 presidential election.) Or could it be for the same reason that people watch horror movies—because suspense makes everything more exciting? As it happens, I hate horror movies, but then again, I find everyday life sufficiently terrifying.

Michael Wysession is a professor in the Department of Earth and Planetary Sciences at Washington University in St. Louis, as well as a former student of Seth Stein’s. When I met with Wysession not long ago, he said he, too, has noticed resistance to the idea of less momentous 1811-12 earthquakes or of a shutdown fault, even among some of his scientific colleagues. But when I pressed him on why people are reluctant to believe something that can only, if true, mean we’re safer, he indicated that this was a matter beyond the scope of seismology. “You’d have to ask a psychologist,” he said.
Posted by Mercury at 11:57 AM