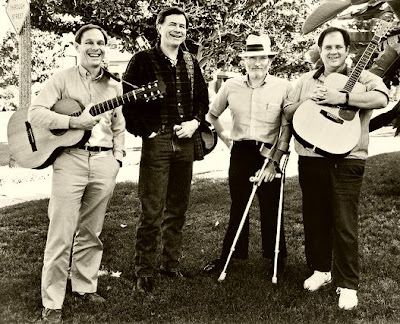 Bob Burnett, Steve Trott, Steve Butts and Dave Fisher, from left, of the Highwaymen in 1990. The other member, Chan Daniels, died in 1975.

"Bob Burnett dies at 71; member of folk group the Highwaymen"

Bob Burnett, a guitar-playing tenor who became a lawyer, was one of the freshmen at Connecticut's Wesleyan University who formed the group, which had a significant effect on the early '60s folk scene.

Los Angeles Times
The members of the folk group the Highwaymen were freshmen in the same fraternity at Wesleyan University in Connecticut when they came together to perform at a campus party in 1958.

By their senior year, the quintet had a No. 1 single with their haunting version of the African American spiritual "Michael, Row the Boat Ashore," which was a hit on both sides of the Atlantic in 1961.

Although the group had a significant impact on the folk scene in the early 1960s — turning "Big Rock Candy Mountain" and "All My Trials" into folk standards — the Highwaymen disbanded in 1964 when Bob Burnett and two other members decided to attend graduate school.

Burnett, the guitar-playing tenor who became a lawyer, died Wednesday at his home in East Providence, R.I. His family said he had a brain tumor. He was 71.

"The original Highwaymen, along with the Kingston Trio and later, Peter Paul and Mary, were among those responsible for popularizing American music — call it folk, blues, country, whatever," Kris Kristofferson told The Times when Dave Fisher, lead singer of the Highwaymen, died last year.

At first they called themselves the Clansmen, a reflection of the Scottish and Irish influences in their repertoire. As students on a campus in the Northeast in the late 1950s, they were unaware of the name's racial connotation in the South.

Once their harmonizing caught on, their manager suggested the name the Highwaymen, in honor of the early 1900s poem by Alfred Noyes.

They followed their first hit record with "Cotton Fields," which broke into the Top 20. Their version is credited with reviving what was then an obscure song by folk-blues musician Leadbelly. It was their last major success.

The Highwaymen regularly performed in Greenwich Village at the height of the folk music scene and recorded eight albums before parting amicably.

The other founding members were Chan Daniels, who died in 1975; Steve Butts, who earned a doctorate and became an academic administrator at the college level; and Steve Trott, who eventually became a judge for the U.S. 9th Circuit Court of Appeals.

The dust-up was quickly resolved when Jennings suggested that Burnett and his bandmates open for the country quartet in 1990 in Los Angeles. The folk-music Highwaymen agreed, and the renewed exposure and recognition led them to perform around the country over the following two decades.

Robert Burnett was born Feb. 7, 1940, in Providence and grew up in Mystic, Conn.

He majored in political science at Wesleyan while establishing school pole-vault records and earning a bachelor's degree in 1962. After graduating from Harvard Law School, Burnett worked as a trusts lawyer for several banks before retiring from Bank of America.

He temporarily left the Highwaymen in 1962 to serve in the Army. At basic training in Fort Dix, N.J., he met the colonel's daughter, Kathleen Cullis; they married in 1964.

In addition to his wife, Burnett is survived by a son, Michael; two daughters, Melissa and Katherine; nine grandchildren; and two brothers.

The New York Times
Bob Burnett, who blended his smooth tenor tones into the harmonies of the original folk-revival group the Highwaymen (“original” because another group later, somewhat contentiously, adopted the name), died on Wednesday at his home in East Providence, R.I. He was 71.

The cause was brain cancer, his wife, Kathleen, said.

Except for a high-pitched rendition of “Ghost Riders in the Sky” when he stepped onstage in cowboy clothes in first grade, Bob Burnett had never performed in public before 1958, his freshman year at Wesleyan University. That was when he and four other freshmen, pledging for a campus fraternity, were told to put together an entertainment act.

And so Mr. Burnett — along with Dave Fisher, Steve Butts, Chan Daniels and Steve Trott — became the Highwaymen. By the fall of 1961 they had the No. 1 song in the country, “Michael,” a version of the African-American spiritual “Michael, Row the Boat Ashore.”

The Highwaymen performed until 1964. (In the meantime Mr. Trott, who went to law school, was replaced by Gil Robbins.) By then they had recorded eight albums, including “Hootenanny With the Highwaymen,” and “One More Time,” and 10 singles, among them “Cotton Fields” and “Gypsy Rover.” They appeared on “The Ed Sullivan Show” three times.

Of the six Highwaymen, only Mr. Fisher, the lead tenor and organizer of the group, stayed in the business, as a music director for films and television. Mr. Burnett, after serving in the Army Reserve, graduated from Harvard Law School in 1967 and went on to a long career in law and banking. That course would change, somewhat, more than 20 years later.

In 1990, Mr. Fisher went to a concert in Houston after hearing that the country superstars Willie Nelson, Waylon Jennings, Johnny Cash and Kris Kristofferson were performing together as the Highwaymen. The original group filed suit for copyright infringement.

As a solution, the new Highwaymen asked the original performers to open for them at a show in Los Angeles. Having already considered occasionally performing together again, the first group jumped at the chance. In their second run, besides appearing in concerts on weekends, they recorded five more CDs. In 2007, the rock ’n’ roll magazine Blitz called their album “When the Village Was Green” one of the best releases of the year.

Robert Sherwin Burnett was born in Providence on Feb. 7, 1940, to Roberta and Robert Ellis Burnett. Besides his wife of 47 years, the former Kathleen Cullis; he is survived by a son, Michael; two daughters, Melissa Burnett-Testa and Katherine Burnett; and nine grandchildren.

Of the original Highwaymen, only Mr. Trott and Mr. Butts are still living. Mr. Robbins, who replaced Mr. Trott and was the father of the actor Tim Robbins, died in April. Mr. Fisher died in 2010 and Mr. Daniels in 1975.

Although Mr. Burnett had been second tenor during the group’s first run, he was sometimes given the lead by Mr. Fisher in recent years. That was particularly true after he was told he had cancer, his wife said.

“Dave gave him the solo in ‘Down by the Lagan Side,’ because he knew it meant a lot to both of us,” Ms. Burnett said, referring to an Irish love song by Tommy Sands. Her husband, she said, would “look me in the eye when I was in the audience.”

Among the lyrics: “And when we dance, we’ll dance together./When we cry, we’ll hold each other./And when we love, we’ll love forever.”
Posted by Mercury at 8:03 AM