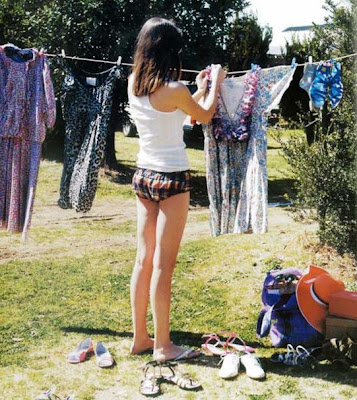 I used to own a house and some time after I sold it I was asked what I missed the most. The top five starting at the bottom: Garden, hardwood floors, woodworking area, photographic/lab, the outdoor clothesline. Air dried clothes are the best. 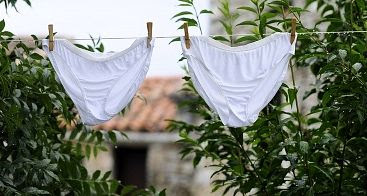 Such a technology will make adolescence tougher.

"Nanotechnology May Lead To The End Of Laundry"

Forbes
A few months ago, I reported on the futuristic possibility of robots learning how to do laundry. Alas, technology marches on, and it may well be that laundry robots are already obsolete. Several different companies using nanotechnology are working on products that may well spell the end of the need to do laundry – forever.

Take, for example, Schoeller textile’s Nanosphere technology. This is a finishing technology utilizing polymer nanospheres which take their cues from the way leaves let water run right off of them. Schoeller has partnered with several different companies to use their finishing technology on their clothing. Perhaps one of the most notable companies they’ve partnered with is iRepel, which makes chef shirts and aprons, and whose products are featured on ThinkGeek.

Another interesting bit of research was recently published describing cotton shirts that are treated with Titanium Oxide particles. When exposed to light in the visible spectrum, the fabric turns out to be self-cleaning. Robert Gonzales has a nice writeup of the technology in io9 .

Simply put, Long and Wu’s fabric is more versatile. For decades, TiO2 was only known to exhibit photocatalytic properties in the presence of ultraviolet light. But recently, it was shown that spiking TiO2 with nitrogen ions gives it photocatalytic capabilities in UV light and visible light. By coating their fabric with nano particles made from this new N-TiO2, the researchers have created a fabric that self-cleans in the presence of a very broad spectrum of light. What’s more, they found that further dispersing additional silver iodide nanoparticles in the fabric accelerated the N-TiO2‘s stain-fighting properties.

Neat as that particular fabric sounds, however, I think I might hold off on buying a shirt made from it until we’re sure that Titanium Oxide doesn’t cause brain damage. If it’s safe, however, that’s a pretty amazing thing – just lay your shirts out in the sun and they clean themselves.

Perhaps one of the most amazing upcoming nanotech coatings, however, is Ross Nanotechnology’s Neverwet. Neverwet is a superhydrophobic coating that can be used on a variety of surfaces, including use as a spray coating for clothing, the way you might use a typical waterproofing spray.

With more and more companies using nanotechnology create clothing and other materials that are resistant to water and staining, it may not be too long before we never have to do the laundry again – because our clothes are always clean. Imagine the time, money, energy and money that would save. Especially imagine the benefits for people living in developing countries where all the laundry is done by hand. Not only does the lack of laundry mean cleaner water, it means that people can be spared hours of tedious, backbreaking labor.

This is one of those things that seems kind of neat at first – hey look, no stains! But when you think about it, the ramifications for day to day life are pretty extraordinary. I’m excited to see where this technology goes.

Also, I look forward to never having to do laundry again. I’m also glad that robots won’t be doing the laundry, either. That’s just one less reason for them to want to rise up and overthrow their human masters.

Thanks to POSP stringer Tim.