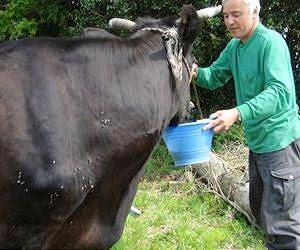 "The hermit of Fukushima 'staying put' despite risks"

TERRADAILY
Naoto Matsumura is tired of being accused of madness for refusing to leave his farm in the shadow of Japan's still-leaking Fukushima nuclear plant.

"I'm not crazy," insists the 52-year-old, who claims he is the only person living in the no-go zone around the crippled reactors on Japan's tsunami-ravaged northeast coast.

As far as he knows, everyone else heeded the government's calls to leave the 20-kilometre (12-mile) exclusion zone around the plant, where nine months on from the disaster, technicians are still working to bring things under control.

Since everyone else left he has been alone near the town of Tomioka, save for around a hundred cats, a dozen dogs and hundreds of cows, pigs and chickens abandoned by their owners.

Matsumura is aware that the doses of radiation he probably absorbs every day are dangerous. But he says he is less afraid of the radiation than he is of being deprived of his cigarettes.

"I like smoking. If I quit smoking right now, I may become ill," he laughed.

With no electricity, he carefully rations the fuel he buys in a nearby city for his vehicle and his generators.

His only day-to-day link with the outside world is his mobile phone.

He worries that the coal left behind by his neighbours might not last out the increasingly bitter winter weather as temperatures in the region continue to fall.

Speaking to AFP in the city of Koriyama, outside the restricted area, the hermit appears to be in good health, despite the harsh conditions he has imposed on himself.

Tens of thousands of people left their homes around the plant when the earthquake-sparked tsunami of March 11 swamped its cooling systems, sending reactors into meltdown and spewing radiation into the air and sea.

Large parts of the evacuation zone are likely to remain uninhabitable for a long time to come, perhaps decades.

Matsumura says he fought against being evacuated from the area that he calls home and eventually received permission from authorities to come and go as he pleases.

In the panic that surrounded the evacuation of Tomioka on March 15, many people had neither the time nor the resources to do anything about their farm animals and pets.

He says his biggest concern is for those animals, which are facing a winter without shelter or food.

"These animals need human beings. The food that I have will not be enough to last until the end of December," he said.

"They need shelter and food, but I'm the only one taking care of them, when it should be the role of government," he said.

Matsumura says nine months after the area was evacuated, he is still shocked when he discovers the bodies of animals.

"I have seen many animals dying, from disease or hunger, some left tied up. I saw cows who were still able to eat grass where the rope around their muzzles had cut into the flesh as the animals have grown. These creatures are bleeding to death."

One of his friends begged him to go home to free the twenty canaries he had left in a cage. "When I entered the house, it was too late. They were all dead."

Matsumura says he is not lonely. He has been separated from his wife for ten years and his grown-up children live in Saitama prefecture, near Tokyo. They are worried for him, but he refuses to leave.

"I am never bored or depressed. I got used to being alone and lonely," he said.

As evening falls and the area is plunged into darkness, Matsumura finds himself at a loose end.

"I go to bed very early, around 7:00 pm, because I cannot do anything anyway."

In the morning, he rises with the sun and, followed by his dogs, spends half the day feeding the animals.

He himself eats mainly canned food and rice, because everything that grows on the ground is contaminated. "My diet is not really very good," he admits.

He regularly drives outside the restricted area to buy cigarettes and food.

"Some Japanese media have tried to make me look foolish by saying that I was eating contaminated mushrooms. But in reality, I pick them up to give to researchers. I'm not crazy," he said.

Matsumura says he would like the government or plant operator Tokyo Electric Power (TEPCO) to come and pick up the dead animals.

The answer he gets when he asks is always the same.

"'Sorry Mr. Matsumura,' they say,'we cannot do anything inside the exclusion zone.'"

The future of his town is not a bright one, he says. He thinks Tomioka, like other places that have been evacuated, will one day vanish from the map.

And he knows exactly what is to blame for that.

"I do not want the power plant to start working again. I want the place to disappear."
Posted by Mercury at 12:20 PM