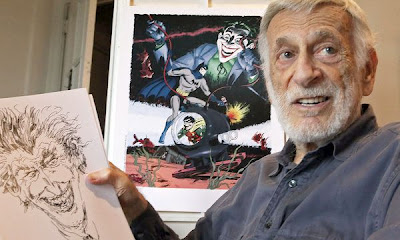 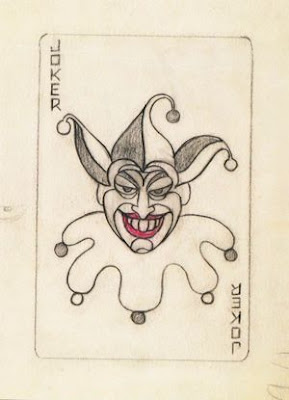 The Joker: [to Detective Stephens] Do you want to know why I use a knife? Guns are too quick. You can't savor all the... little emotions. In... you see, in their last moments, people show you who they really are. So in a way, I know your friends better than you ever did. 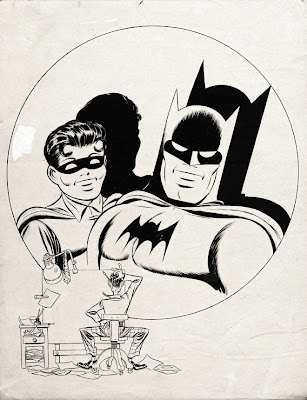 NEW YORK DAILY NEWS
Jerry Robinson, the pioneering comic book artist credited with creating Batman’s archnemesis, the Joker, and later a crusading hero for cartoonists in his own right who helped restore “Superman’s” creators’ rights in a single bound, died in his sleep Wednesday night. He was 89.

“Everyone who loves comics owes Jerry a debt of gratitude for the rich legacy that he leaves behind,” Jim Lee, DC Entertainment co-publisher and popular “Batman” artist, said in a statement.

Discovered by “Batman” creator Bob Kane as a 17-year-old journalism student enrolled at Columbia University, Robinson entered comics in 1939 as an inker and letterer on the fledgling comic. Though Kane claimed he and writer Bill Finger came up with the idea for the Joker — embodied by Heath Ledger in the 2008 film, “The Dark Knight” — most comic historians credit Robinson for the iconic villain.

“The heroes are rather dull — they have to be heroes,” Robinson told this reporter for a 2008 Wizard Magazine profile. “The exciting ones are the villains.”

Robinson, however, ditched super heroes in the 1950s and launched a weekly cartoon, “Flubs and Fluffs.” The strip poked fun at real-life students’ errors that became a Sunday staple for years in the New York Daily News. Expanding his horizons further, he launched a political satire strip called “Still Life” in the early ‘70s.

The New Jersey-born artist’s greatest contributions to cartooning, however, came off the drawing board.

Robinson became an advocate for cartoonists’ rights, most notably championing the case of Jerry Siegel and Joe Shuster, the creators of “Superman.”

Broke and locked in a legal battle with DC Comics over the rights for their creation at a time in the early ‘70s when $3 million for the rights a Superman feature film. Launching a high-profile publicity campaign on behalf of his peers, Robinson helped negotiate a financial settlement that restored the creators name on every Superman comic.

“He fought to bring respectability to the artists and writers who created the comics and who had long been ignored by society,” says comic historian and movie producer Michael Uslan, who considers Robinson a friend and mentor.

Another Robinson plot worthy of the Joker helped out another beleaguered cartoonist in a more literal life-and-death situation. Francisco Laurenzo Pons was languishing in a Uruguayan jail for six years, enduring beatings and electric shocks, having been imprisoned by the ruling military junta for a working at a liberal magazine, when Robinson heard of his plight in 1984. So Robinson helped create a bogus award with the Association of American Editorial Cartoonists and named Pons a winner. The media circus drew attention to Pons, and Uruguay felt compelled to release him.

“I don’t have any doubt that pressure from the [Robinson and the Association of American Editorial Cartoonists] had a bearing on making my freedom possible,” Pons told the News by email in 2008.

Robinson, who settled down in New York since his Columbia days, is survived by a wife, Gro, a sons, Jens, and a daughter, Kristen, as well as two grandchildren.

"Jerry Robinson, Godfather of a Comic-Book Villain, Dies at 89"

The New York Times
Jerry Robinson, a prolific comic-book artist, comics historian and editorial cartoonist who is credited with having created the Joker, the archenemy of Batman with devilish eyes and ghoulish smile, died on Wednesday at a hospice on Staten Island. He was 89 and lived in Manhattan.

His son, Jens, confirmed the death.

It was a chance encounter on a tennis court in the Poconos in 1939 that started Mr. Robinson’s career. Then 17 and on vacation before going to college, he was wearing a jacket covered with his own cartoons when a man on a nearby court struck up a conversation. It was Bob Kane, primary creator of a counterpart to Superman then still in the works: Batman.

“It’s a shame you’re going to Syracuse or you could join the Batman team,” Mr. Robinson recalled Mr. Kane saying. Mr. Robinson transferred to Columbia, joined the team and, by most accounts, began sketching the sinister character.

“Villains, I always thought, were more interesting,” Mr. Robinson said last year in a profile in The New York Times. “I think the name came first: the Joker. Then I thought of the playing card.” (His parents were bridge players).

The Joker made his debut in 1940 and has created havoc ever since, in print as well as on television (Cesar Romero in the 1960s series) and in film (Jack Nicholson and Heath Ledger).

Mr. Kane, who died in 1998, long contended that he and Bill Finger, the original writer on the series (who died in 1974), had created the Joker. But several comic-book historians concur with Mr. Robinson’s account.

“I believe Jerry did most of it, and Bill Finger polished Jerry’s idea,” one of them, Mark Evanier, said on Thursday. Michael Uslan, a historian who is executive producer of the Batman movies, agreed: “From everything I’ve heard over the years, it was him and Bill Finger.”

No one, however, has contested that Mr. Robinson created Robin, Batman’s sidekick, following Mr. Finger’s suggestion for a character youngsters could connect with. He came up with the name and designed the costume, based on N. C. Wyeth’s illustration “Robin Meets Maid Marian.”

Mr. Robinson left the Batman team in the early 1940s and began creating his own comic-book characters, among them London, a superhero inspired by the bombings of Britain during World War II, and Atoman, a nuclear-powered version of Superman. For two years, starting in 1953, he did a daily science-fiction adventure strip, “Jet Scott,” for The New York Herald Tribune.

In a syndicated strip in the 1960s, “Still Life,” Mr. Robinson featured inanimate objects involved in conversation, often political. In one, a water faucet says, “Unless this country faces up to the problem of water conservation, we’ll be in real trouble” — to which a drop of water from the faucet asks, “Where will we put all the pollution?”

Mr. Robinson also did cover illustrations for Playbill magazine, wrote more than two dozen books on the history of comics and taught at the School of Visual Arts in New York. He was president of the National Cartoonists Society from 1967 to 1969.

Sherrill David Robinson was born in Trenton on Jan. 1, 1922, the youngest of five children of Benjamin and Mae Robinson. Besides his son, he is survived by his wife of 57 years, the former Gro Bagn; a daughter, Liv Robinson-White; and two grandchildren.

Beyond his own creations, Mr. Robinson was active in supporting artists’ rights. According to a 2010 biography, “Jerry Robinson: Ambassador of Comics,” by N. C. Christopher Couch, he helped secure the release of a Uruguayan cartoonist, Francisco Laurenzo Pons, who was imprisoned in the 1980s for lampooning the military junta in his country.

He was also instrumental in mobilizing support for the writer-and-artist team of Jerry Siegel and Joe Shuster, who created Superman in the 1930s and had sold their rights to the character for $130. A long legal fight resulted in a settlement with Warner Communications, DC Comics’ corporate parent, providing the pair with annual payments for the rest of their lives and provisions for their heirs.

It took a series of calls involving Mr. Robinson to reach a deal to have Siegel and Shuster credited on all print materials, films and television productions. Afterward Mr. Robinson received a letter from Mr. Siegel: “Thank you for being what is truly priceless: a good friend.”

Wired
Jerry Robinson, the legendary comic book artist who helped create pillars of the Batman mythos like Robin, Joker, Alfred Pennyworth and Two-Face, died Wednesday in New York at the age of 89.

“Jerry Robinson illustrated some of the defining images of pop culture’s greatest icons,” DC Entertainment co-publisher Jim Lee said in a statement. “As an artist myself, it’s impossible not to feel humbled by his body of work. Everyone who loves comics owes Jerry a debt of gratitude for the rich legacy that he leaves behind.”

That legacy has grown ever since 1939, when Batman co-creator Bob Kane spotted a 17-year-old Robinson wearing a linen jacket decorated with his own drawings and tapped him to work on the fledgling Batman comics.

Kane would later try to appropriate Robinson’s considerable contributions — including the Joker, which Robinson sketched at right — as his own. But Robinson and a righteous, underdog-friendly comics fandom in and out of the industry later corrected the public record.

Robinson’s work didn’t end with The Dark Knight. He spent more than 30 years drawing political cartoons for Still Life and Life With Robinson, toiled as a creators’ rights activist, served as president of the National Cartoonists Society and literally wrote the book on newspaper comic strips in 1974, called The Comics: An Illustrated History of Comic Strip Art.

“There was an intellect behind everything he did and no one that ever called Jerry and asked for help ever got a ‘No,’” comic book artist Neal Adams told Hero Complex. “Jerry didn’t hesitate a moment, ever, if he had a chance to help someone.” Robinson joined Adams in the 1970s as the creators’ rights crusaders sought a pension for Superman creators Jerry Siegel and Joe Shuster.

Yet it is Robinson’s brilliant work on the early Batman mythos, especially the creation of comics’ greatest supervillain, that paved the way for the billions currently earned by the World’s Greatest Detective’s multimedia iterations.

“Jerry Robinson was an innovator, a pioneer in storytelling,” said Batman editor Mike Marts in DC’s press release. “His artwork was always astonishing, but his contributions to the Dark Knight mythology go far beyond art. The streets of Gotham City are a little lonelier today. Jerry will truly be missed.”

Jerry Robinson [Wikipedia]
Posted by Mercury at 11:01 AM