Newt Gingrich has been smoking something odd...shockwave of electricity? 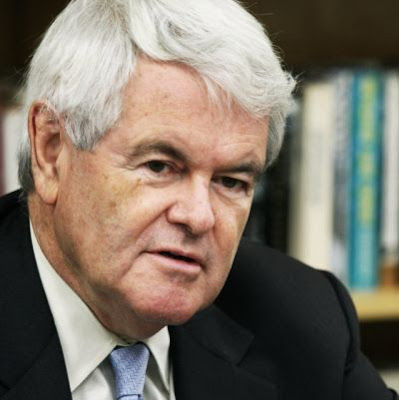 "Among Gingrich’s Passions, a Doomsday Vision"

The New York Times
Newt Gingrich, the Republican presidential hopeful, wants you to know that as commander in chief he is ready to confront one of the most nightmarish of doomsday scenarios: a nuclear blast high above the United States that would instantly throw the nation into a dark age.

In debates and speeches, interviews and a popular book, he is ringing alarm bells over what experts call the electromagnetic pulse, or EMP — a poorly understood phenomenon of the nuclear age.

The idea is that if a nuclear weapon, lofted by a missile, were detonated in outer space high above the American heartland, it would set off a huge and crippling shockwave of electricity. Mr. Gingrich warns that it would fry electrical circuits from coast to coast, knocking out computers, electrical power and cellphones. Everything from cars to hospitals would be knocked out.

“Millions would die in the first week alone,” he wrote in the foreword to a science-fiction thriller published in 2009 that describes an imaginary EMP attack on the United States. A number of scientists say they consider Mr. Gingrich’s alarms far-fetched.

As Mr. Gingrich starts to surge in Republican primary states, voters are likely to get to know some of his many passions. He is an outspoken advocate for zoos. He has suggested overhauling child labor laws so that students can take jobs and learn good work habits. He also has a long interest in the space program, which Mitt Romney all but mocked at the Republican debate in Iowa on Saturday night.

Challenged to say where he and Mr. Gingrich differed, Mr. Romney replied, “We could start with his idea to have a lunar colony that would mine minerals from the moon.”

But it is to the risk of an EMP attack that Mr. Gingrich has repeatedly returned. And while the message may play well to hawkish audiences, who might warm to the candidate’s suggestion that the United States engage in pre-emptive military strikes against Iran and North Korea, many nuclear experts dismiss the threat. America’s current missile defense system would thwart such an attack, these experts say, and the nations in question are at the kindergarten stage of developing nuclear arms.

The Missile Defense Agency, an arm of the Pentagon that maintains an arsenal of ground-based interceptors ready to fly into space and smash enemy warheads, says that defeating such an attack would be as straightforward as any other defense of the continental United States.

“It doesn’t matter if the target is Chicago or 100 miles over Nebraska,” said Richard Lehner, an agency spokesman. “For the interceptor, it’s the same thing.” He called the potential damage from a nuclear electromagnetic pulse attack “pretty theoretical.”

Yousaf M. Butt, a nuclear physicist at the Union of Concerned Scientists, who last year did a lengthy analysis of EMP for The Space Review, a weekly online journal, said, “If terrorists want to do something serious, they’ll use a weapon of mass destruction — not mass disruption.” He said, “They don’t want to depend on complicated secondary effects in which the physics is not very clear.”

Mr. Gingrich’s spokesman, R. C. Hammond, did not respond to e-mails asking for comment. But the candidate, a former history professor and House speaker, has defended his characterizations as accurate. At a forum in Des Moines on Saturday for military veterans, Mr. Gingrich said an electromagnetic pulse attack was one of several pressing national security threats the United States faced. “In theory, a relatively small device over Omaha would knock out about half the electricity generated in the United States,” he told the veterans.

He also referred to the apocalyptic novel “One Second After,” written by a friend and co-author of his historical novels, William R. Forstchen. The book describes an electromagnetic pulse attack on America, conjuring a world in which cars, airplanes, cellphones and refrigerators all die, and gangs of barbarians spring to life.

In the book’s foreword, Mr. Gingrich calls the grim scenario a potential “future history” that should be “terrifying for all of us.” He says he knows its frightening plausibility from decades of personal study.

Electromagnetic pulse is a real phenomenon, though many scientists consider it yesteryear’s concern. It came to light in July 1962 when the American military detonated a hydrogen bomb high above the Pacific. In Hawaii, street lights suddenly went out.

The riddle got little direct investigation because in 1963 the superpowers agreed to end all but underground detonations of nuclear arms. But theoretical studies continued, and worries rose over the decades as electronic circuits became ever more sophisticated and fragile.

Mr. Gingrich is part of a conservative movement that calls EMP an underappreciated danger. In Congress, spurred by Representative Roscoe G. Bartlett, Republican of Maryland, members of the movement hold hearings and recommend new safeguards, especially for the nation’s power grid, for which protective steps could run into many billions of dollars.

In 2004, Mr. Gingrich appeared at a House hearing and said that not taking the EMP threat more seriously “is like going aboard the Titanic knowing it’s going to sink and not putting on the lifeboats.”

As the alarms grew, critics voiced skepticism. In 2004, Philip E. Coyle III, a former head of Pentagon arms testing, wrote that the EMP lobby seemed to “extrapolate calculations of extreme weapons effects as if they were a proven fact” and “puff up rogue nations and terrorists with the capabilities of giants.”

Of late, Mr. Gingrich has emerged as the most visible worrier, often raising the electromagnetic pulse issue in speeches and public appearances. In May 2009, he addressed the American Israel Public Affairs Committee’s annual policy conference.

“We are on the verge of catastrophic problems,” he said of electromagnetic attack. “We have zero national strategy to respond to it today.” That is why, Mr. Gingrich added, “I favor taking out Iranian and North Korean missiles on their sites.”

Critics of such pre-emptive attacks say their advocates ignore, among other things, that Iran is having trouble keeping its missile bases from blowing up and that North Korea cannot seem to get a big rocket off the ground without it tumbling out of control.

To even begin to attempt to do what Mr. Gingrich fears, these rogue states would have to perfect big rockets, powerful bombs and surreptitious ways to loft them high above America, military experts say. And if they did — and there are much easier ways to deliver a nuclear bomb than by missile, these experts argue — United States defenses would spring into action.

Yet Mr. Gingrich’s warnings remain persistently urgent. “Without adequate preparation, we would basically lose our civilization in a matter of seconds,” he said in a 2009 video address for a conference held by EMPact America, a private group near Buffalo that seeks to promote political action on the issue.

Lately Mr. Gingrich’s presidential campaign has widened his audience and the visibility of his message. Late last month at an appearance in Bluffton, S.C., he was asked about EMP and called it “one of the most dangerous technological developments,” likening its destructive force to “a giant lightning strike.”

Some people praise Mr. Gingrich as an atomic visionary.

Last week, on the anniversary of the Japanese attack on Pearl Harbor, Warren Kozak, an author and journalist, wrote on the op-ed page of The Wall Street Journal that the electromagnetic pulse skeptics might be right. “But 70 years ago,” he added, “similar doubters believed Japan would never be so foolish as to take on the United States of America — until, of course, it did.”
Posted by Mercury at 9:25 AM