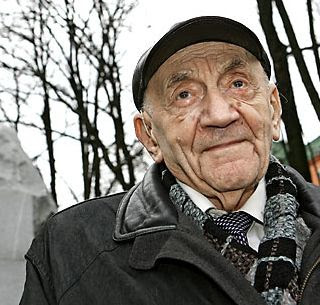 Los Angeles Times
Boris Chertok, 99, a Russian rocket designer who played a key role in engineering Soviet-era space programs, died Wednesday in Moscow after contracting pneumonia, according to the state-controlled RKK Energiya rocket builder where he worked as a top consultant.

For many years, Chertok served as a deputy to the father of the Soviet space program, Sergei Korolyov. He was closely involved in putting the world's first satellite in orbit on Oct. 4, 1957, and preparing the first human flight to space by Yuri Gagarin on April 12, 1961.

Chertok was born in 1912 in Lodz, Poland, when it was still part of the Russian empire, and his family moved to Moscow at the start of World War I.

After graduating from the Moscow Energy Institute in 1940, he started working as an aviation engineer. When World War II ended, Chertok was selected to lead a group of Soviet experts to travel to Germany to tap the Nazi know-how in rockets. He first met Korolyov there, and the two worked closely until Korolyov's death in 1966.

Chertok, who specialized in control systems for rockets and spacecraft, has published memoirs in the last few years chronicling the rise of the Soviet space program from its early days to the moon race that the Soviet Union lost to the United States.

"Each of these first rockets was like a beloved woman for us," Chertok recalled. "We were in love with every rocket, we desperately wanted it to blast off successfully. We would give our hearts and souls to see it flying."

Chertok's voluminous work for the first time revealed to the public details of the endeavors that had been hidden by the veil of Soviet-era secrecy.

The New York Times
Boris Chertok, a Russian rocket engineer who played a central role in designing the navigation systems for Soviet spacecraft during the race to the moon, among them the one that carried the first human into space, died Wednesday in Moscow. He was 99.

Russia’s state-controlled spacecraft manufacturer, RKK Energiya, for which Mr. Chertok was a consultant in his later years, said the cause was pneumonia.

For more than 20 years, Mr. Chertok was a deputy to Sergei Pavlovich Korolev, known as the father of the Soviet space program. Under Mr. Korolev, who died in 1966, Mr. Chertok was the primary designer of control systems for one of the world’s first intercontinental ballistic missiles, the R-7, and the Soviet Union’s earliest manned spacecraft, the Vostok, the Voskhod and the Soyuz.

“It’s difficult to think of any major event in the Soviet space program that he didn’t contribute to,” said Asif Siddiqi, a history professor at Fordham University and the chief translator of Mr. Chertok’s four-volume memoir, “Rockets and People,” published between 2004 and this year.

The Soviet Union seemed predominant in the early years of the space race. Mr. Chertok’s systems guided the rocket that bore Sputnik 1, the first artificial satellite to orbit Earth, into space on Oct. 4, 1957; and, on April 12, 1961, the rocket that took the first man into space, Yuri Gagarin. (Less than a month later, Alan B. Shepard Jr. became the first American in space.)

The Soviets embellished their earlier feats. In August 1962, they launched two manned space capsules that would orbit at the same time. On June 16, 1963, they sent the first woman into space, Valentina Tereshkova. In October 1964, three cosmonauts orbited Earth; it was the first space mission with a multiperson crew, five months before a two-man American flight.

By 1969, however, the United States stepped up to the challenge issued by President John F. Kennedy on May 25, 1961, to send an American to the moon by the end of the decade.

When Neil Armstrong stepped onto the lunar surface on July 20, 1969, an unmanned robot probe that Mr. Chertok and his colleagues had launched a week earlier was stuck in orbit around the moon, stalled by a technical problem. It later crashed into the surface.

In his memoir, Mr. Chertok called the American moon landing a “personal defeat” for his country.

Boris Yevseyevich Chertok was born in Lodz, now part of Poland, on March 1, 1912, the son of an accountant. The family later moved to Moscow. Information about his survivors was not available.

Mr. Chertok was an electrician at 17, and by 1930 was working in an aircraft factory. He graduated from the Moscow Energy Institute in 1940. After World War II, he was a member of a team of experts sent to Germany to mine records of the German rocketry program. Another member of that team was Mr. Korolev. They brought back the blueprints of the German V-2, which became the basis for the Soviet missile and space programs.

In 2001, a Soyuz-U booster blasted two Russian astronauts and an American millionaire, Dennis A. Tito, into orbit for a rendezvous with the International Space Station. Mr. Tito paid $20 million for the trip.

Interviewed at Russia’s mission control center at the time, Mr. Chertok said, “I am a little bit under 90, and if someone presented me with $20 million I would gladly spend it on a ticket to space.”