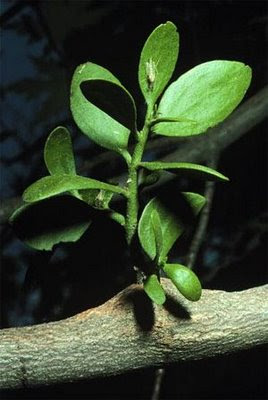 Sitting under the mistletoe (Pale-green, fairy mistletoe),
One last candle burning low,
All the sleepy dancers gone,
Just one candle burning on,
Shadows lurking everywhere:
Some one came, and kissed me there.

Tired I was; my head would go
Nodding under the mistletoe
(Pale-green, fairy mistletoe),
No footsteps came, no voice, but only,
Just as I sat there, sleepy, lonely,
Stooped in the still and shadowy air
Lips unseen - and kissed me there.

Okay, what's with the mistletoe?
"What Does Mistletoe Have To Do With Christmas?" 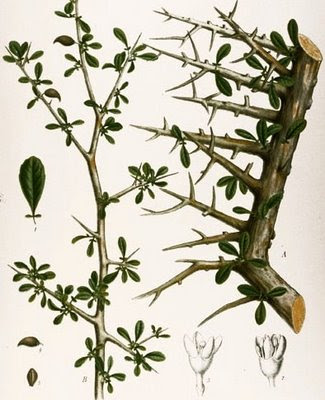 Frankincense: Harmless, dried resin from the genus Boswellia tree and basically used as incense. It can still be purchased. 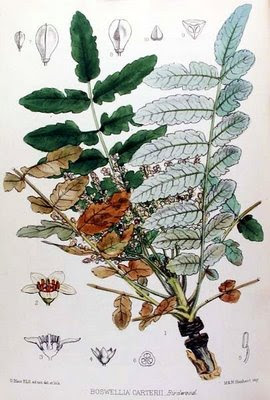 Myrrh: A resin as is Frankincense and it was used as an anti-infectious, anti-inflammatory, antiseptic, astringent, and as a tonic. Basic continuant is myrrholic acid with a host of many other chemicals. It was incidentally also used in embalming.

And, here are three more plants associated with Christmas: 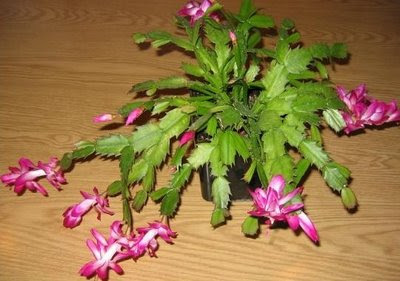 Christmas Cactus Scientific name(s): various Schlumbergera (Zygocactus) species or cultivated hybrids, especially Schlumbergera x buckleyi Plant family: Cactaceae-Cactus family Other common names: Orchid Cactus Schlumbergera bridgesii, photo by Reid Moran The Christmas Cactus is a succulent perennial which lacks spines and is native to the South American tropics of Brazil. Like many tropical cacti, this holiday favorite is an epiphyte, which means it lives on other plants. Unlike a parasitic plant that obtains nutrients from its host, epiphytes just use their host as substrate, a place to live. The genus (Schlumbergera) to which the Christmas Cactus belongs is one of the most widely cultivated and enjoyed groups of cacti in the world. They have been extensively hybridized by artificial means in order to produce a wide range of different colored flowers, including magenta, white, pink, salmon, and orange. The closely related Thanksgiving Cactus or Crab Cactus (Schlumbergera truncata, syn. Zygocactus trucata) is also common in horticulture and may even be one of the parent species of the hybrid Christmas Cactus. The showy flowers produced by these cacti are pollinated in nature by birds. Do Christmas Cacti have leaves? The green, flattened, leaf-like structures that make up the majority of a Christmas Cactus are actually modified stem segments called cladodes. The stems of our local species of prickly-pears or nopals (Opuntia spp.) are also called cladodes since they too are flattened and leaf-like. In most cacti, the leaves have been modified into spines which have many different functions for the plant, or as in the Christmas Cactus, the leaves and spines are absent. What does day length and darkness have to do with holiday flowers? Various plant species require cues from the environment to regulate the timing of certain events, like flowering. This mechanism called photoperiodism occurs when plants initiate flowering or other activities in response to relative lengths of daylight and darkness. In winter, the days get shorter and the nights get longer. This is a very important indicator to some plant species, e.g., Christmas Cactus, Poinsettia, and some Chrysanthemum species, to stimulate them to start flowering. In these species it is actually the longer period of darkness, not the brevity of light, that seems to be important in helping them to recognize their appropriate flowering times. Commercial growers have been able to manipulate flowering times by artificially changing light regimes in greenhouse settings in order to induce plants to flower at a particular time of the year, e.g., Poinsettias in bloom during the holidays. Although many of our favorite holiday flowers are "short-day" plants since they require at least 12 hours of uninterrupted darkness to stimulate flowering, it should be noted that some plants are "day-neutral" and are capable of flowering regardless of the amount of light (or darkness) they receive each day. In these species, flowering is controlled by other factors. 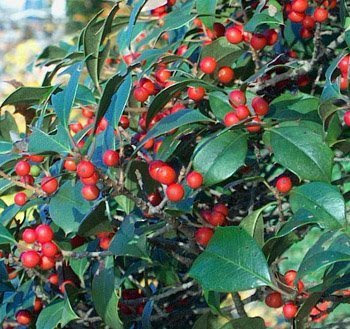 Holly Plant family: Aquifoliaceae (Holly family) Other common names: American Holly, English Holly, Christmas Holly Holly is a plant frequently utilized to "deck our halls" during the holiday season. The boughs used to decorate typically are cuttings from any evergreen trees or shrubs in the genus Ilex. The most common holly species used are Ilex opaca from the eastern United States and Ilex aquifolium from Eurasia. Both species have spiny-margined, evergreen leaves, and usually exhibit red berries. Are male or female holly plants most often used in holiday decorating? If you are decorating with holly that has red berries, then you are using pistillate "female" plants. Many holly species are dioecious, which means that staminate "male" and pistillate "female" reproductive organs are separated on different individual plants. This sexual condition (dioecy) with individual plants bearing separate sexes promotes cross-fertilization, or outcrossing, which increases the genetic variability of the species but usually at the cost of lower seed-setting efficiency. Dioecy also prevents isolated individuals from reproducing on their own most of the time. Therefore, in most cases it is necessary that male and female plants grow in close proximity, or no red berries will be produced on the female plants for use during the holidays. The Desert-Holly (Atriplex hymenelytra) that commonly grows in Anza-Borrego Desert State Park and in northeastern Baja California is not closely related to the holly (Ilex spp.) used during the holiday season. Although their common names suggest a close relationship, the name refers to its sharply-toothed leaves. Desert-Holly is a saltbush in the Chenopodiaceae (Goosefoot family) that is actually more closely related to beets (Beta vulgaris) and pickleweeds (Salicornia spp.) than to the evergreen decorative holly. In the Cape region of Baja California Sur, there is a species of holly (Ilex californica) that can be found naturally occurring in the Sierra de la Laguna. 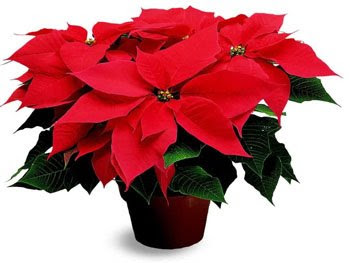 Poinsettia Scientific name: Euphorbia pulcherrima Plant family: Euphorbiaceae (Spurge family) Other common names: Christmas Flower, Cuetlayochitl (by the Aztecs), Lobster Flower, Flame-Leaf Flower, Flor de Noche Buena ("Flower of the Holy Night," i.e., Christmas Eve) The plant that is responsible for the majority of commercial plant sales during the holiday season in our region is the Poinsettia. This species is a perennial shrub with white milky sap that can grow up to six feet (2m) tall and is native to Mexico. The Poinsettia is usually classified in the genus Euphorbia subgenus Poinsettia, although some taxonomists recognize this subgenus at the generic level so you might occasionally see the scientific name as Poinsettia pulcherrima. Although Euphorbia pulcherrima is not native to our region, in the southern part of Baja California Sur there is another closely related species (Euphorbia cyathophora) that looks somewhat similar to the cultivated Poinsettia by having reddish-colored bracts surrounding the flowers. This weedy species commonly occurs in the eastern and central United States, Mexico, and Central America. Euphorbia misera, photo courtesy of Norm Roberts The Poinsettia is named in honor of Joel Robert Poinsett, an American ambassador to Mexico who introduced this plant species to the United States in the 1820s by bringing cuttings from Mexico back to his greenhouse in South Carolina. Although Poinsettias are used now mainly for decoration, the sap has been used by some cultures to control fevers, and the floral bracts were once used to make a reddish dye. In order to induce this plant species to flower, at least a few weeks of more than 12 hours of darkness each day are required. Therefore, commercial growers have to "fool" the plant in greenhouse conditions by artificially manipulating the length of daylight and darkness periods in order to get the plants in a flowering state during our holiday season. A flower or not a flower? That is the question... Flowers are not always as they appear to be. Generally, we tend to think of pretty blooms as individual flowers, no matter what their size. However, sometimes what appears to be a single flower may actually be a grouping of smaller flowers that together look like an individual flower. Some of the best examples of this arrangement exist in the Asteraceae (Compositae), the Sunflower or Daisy family. Some composite "flowers" actually have two different types of flowers making them up. For example, if you think of what a common Sunflower (Helianthus annuus) looks like, the yellow outer petal-like structures are each individual flowers called ray flowers, and the many brown structures in the center are also individual flowers called disk flowers. So the next time that you start pulling off "petals" of a daisy and chanting "he loves me, he loves me not," realize that you are actually pulling off individual flowers and not petals, as you may have thought. This same general concept can also be encountered in Poinsettias, but it is even a bit more derived. The most conspicuous parts of the Poinsettia "flower" are brightly colored (usually red) bracts, which are actually modified leaves. In the center of these circles of bracts are several smaller greenish structures that are grouped together. Each one of these structures, called a cyathium or pseudanthium, is actually a small grouping of individual flowers that lack petals and have only one sex (staminate = male or pistillate = female). Therefore, unlike most composite flowers, individual flowers in Euphorbia species do not have their own petals. It should be noted that not all Poinsettias have red bracts. Different cultivated varieties of Poinsettias have varying bract colors including pink, white, or green.
Posted by Mercury at 6:31 AM