"Seven Samurai"...still one of the best 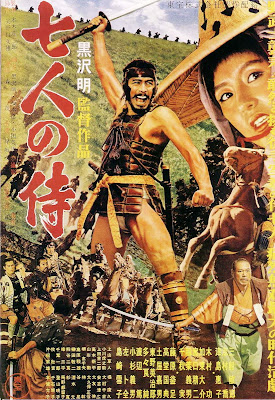 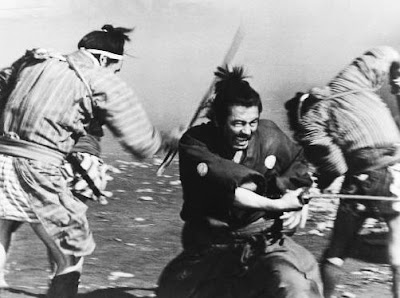 guardian.co.uk
A group of samurai, along with a motley gang of armed villagers, await the arrival of 13 formidable bandits on horseback. With piercing rain beating down on them, Kambei, the leader of the samurai, solemnly says: "This is the final battle." With hellish cries, the mounted invaders charge through the black mud and into the village, where they are annihilated by a frenzy of makeshift spears and deadly arrows. Samurai swords cut into the horses, bodies drop into the mud – mud that lurched off the screen and into my socks.

Long before I was to experience the technical marvels of 3D, I was experiencing something much more cinematically powerful – the percussive power of Akira Kurosawa's editing. The subtitles didn't even register. I sat in my parent's living room; 12 years old, transfixed and shell-shocked by the way the images had catapulted me into the rain-drenched violence. Cinema would never be the same again and in that moment I decided I wanted to become a film-maker.

Initially, however, I remember being quite resistant to my parent's suggestion of sitting down with them to watch a three-hour black and white film set in 16th century feudal Japan. I had no idea what a samurai was … and why was everyone going bald and wearing pyjamas? It wasn't until master swordsman Kyuzo settled a feud with a lethal swipe of his blade that I started to pay close attention. (It seems Sam Peckinpah was taking notes, too.)

Seven Samurai, made in 1954, is perhaps Kurosawa's most famous film. It was a blockbuster in every sense, being the most expensive Japanese film ever made (after Kurosawa insisted on shooting everything on location) and running to almost four hours in length. It's a period film (or jidaigeki) conceived on an epic scale, pitting Takashi Shimura's wise, zen-like leader against the wildcat intensity of Toshiro Mifune's son-of-a-farmer samurai. Along with five other swords-for-hire (of mixed ability), they are employed by farmers to protect their village from raiding bandits. What follows is pure cinematic dynamite.

The story may not be as groundbreaking as Rashomon, or as poignant as Ikiru (said to be Steven Spielberg's favourite film), but everything is beautifully constructed and the film contains enough frenetic action sequences to make Quentin Tarantino blush. It's also rather funny. When asked how many enemies he's recently killed, one samurai responds: "Since it is impossible to kill them all, I usually run away." Kurosawa (from samurai stock himself) wasn't afraid to dismantle the mythical status cinema had attributed to samurai figures: a theme Clint Eastwood would later explore in High Plains Drifter and Unforgiven.

Also paying close attention to all of this was George Lucas, who would eventually combine the plots and characters from Seven Samurai with another Kurosawa adventure, Hidden Fortress, to make Star Wars. The first one (Episode IV: A New Hope) is essentially the first chapter of Seven Samurai, but with slightly fewer characters. Obi-Wan Kenobi, Han Solo and Chewbacca are ronin (masterless samurai), light-sabres are samurai swords (rather obvious, I guess) and the Force is a supernatural version of the Bushidõ samurai moral code. Lucas even borrows Kurosawa's favourite character theme of master and apprentice. When Obi-Wan Kenobi faces Darth Vader on the Death Star, light-sabres at the ready, Darth booms: "When I left you I was but the learner. Now I am the master."

I guess Kurosawa would have taken it as a compliment, as he was no stranger to adaptations himself – having reworked Dostoevsky's The Idiot and Shakespeare's Macbeth (Throne of Blood), Hamlet (The Bad Sleep Well) and King Lear (Ran) to great effect. He was also a big fan of John Ford westerns, and so it seems only appropriate that Seven Samurai was later remade by Hollywood as The Magnificent Seven with Steve McQueen and Yul Brynner.

The lesson this taught me, when I later studied film-making at university, was that cinema is a fluid melting pot of ideas – where every composition, every carefully timed edit, every line of dialogue is borrowed or remoulded from the long history of cinematic grammar, thrashed out over decades of genre mashups and cultural twists. And it's all there for the taking. What could be more reassuring to a young film-maker who has no idea of where to begin? Simply pillage from the films and stories that first inspired you to pick up a camera. Lucas did it to Kurosawa, and Kurosawa did it to Shakespeare and John Ford.
Posted by Mercury at 3:10 PM