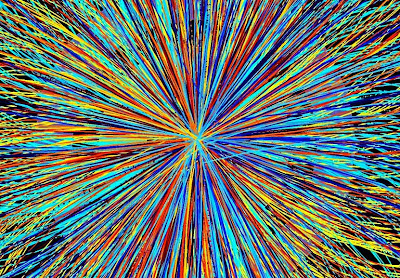 LiveScience
Scientists at the Swiss lab that hosts the world's largest atom smasher, the Large Hadron Collider (LHC), will announce their latest findings in the search for an elusive subatomic particle called the Higgs boson or "God particle," next week. Already blogs and online news outlets are abuzz with speculation about the big announcement.

The CERN lab in Geneva has cautioned that LHC's ATLAS and CMS experiments have not accrued enough data to make any conclusive statement on the existence or non-existence of the Higgs boson, an as yet undetected particle thought to give all other particles their mass.

Even so, the BBC is reporting that a "respected scientist from the CERN particle physics laboratory has told the BBC he expects to see 'the first glimpse' of the Higgs boson next week."

The LHC is a 17-mile (27-kilometer) long underground circular tunnel where particles are smashed into one another at near light speed. The collisions produce enormous amounts of energy, releasing various exotic particles that may include the Higgs boson.
Posted by Mercury at 11:54 AM