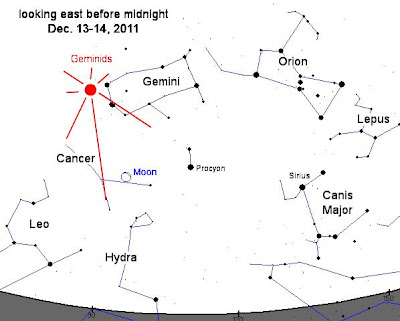 "Observers with clear skies could see as many as 40 Geminids per hour," predicts Bill Cooke of the NASA Meteoroid Environment Office. "Our all-sky network of meteor cameras has captured several early Geminid fireballs. They were so bright, we could see them despite the moonlight."

The best time to look is between 10 pm local time on Tuesday, Dec. 13, and sunrise on Wednesday, Dec. 14th. Geminids, which spray out of the constellation Gemini, can appear anywhere in the sky. "Dress warmly and look up," says Cooke. "It's that simple."

The source of the Geminids is near-Earth asteroid 3200 Phaethon. Most meteor showers come from comets, so having an asteroid as a parent makes the Geminids a bit of an oddball.

"This is the thing I love most about Geminids," says Cooke. "They're so strange."

Every year in mid-December, Earth runs through a trail of dusty debris that litters the orbit of 3200 Phaethon. Comets vaporizing in hot sunlight naturally produce such debris trails, but rocky asteroids like 3200 Phaethon do not. At least they're not supposed to. The incongruity has baffled researchers since 1983 when 3200 Phaethon was discovered by NASA's IRAS satellite.

One clue: 3200 Phaethon travels unusually close to the sun. The asteroid's eccentric orbit brings it well inside the orbit of Mercury every 1.4 years. The rocky body thus receives a regular blast of solar heating that might somehow boil jets of dust into the Geminid debris stream.

In 2009, NASA's STEREO-A spacecraft saw this process at work. Coronagraphs onboard the solar observatory watched 3200 Phaethon as it was swinging by the sun. Sure enough, the asteroid doubled in brightness, probably because it was spewing jets of dust.

"The most likely explanation is that Phaethon ejected dust, perhaps in response to a break-down of surface rocks (through thermal fracture and decomposition cracking of hydrated minerals) in the intense heat of the Sun," wrote UCLA planetary scientists David Jewitt and Jing Li, who analyzed the data.

Jewett and Li's "rock comet" hypothesis is compelling, but they point out a problem: The amount of dust 3200 Phaethon ejected during its 2009 sun-encounter added a mere 0.01% to the mass of the Geminid debris stream--not nearly enough to keep the stream replenished over time. Perhaps the rock comet was more active in the past …?

"We just don't know," says Cooke. "Every new thing we learn about the Geminids seems to deepen the mystery."
Posted by Mercury at 12:53 PM