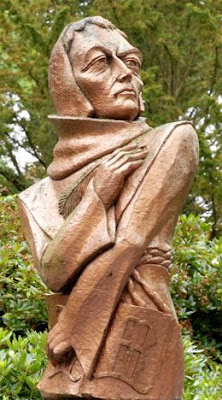 Examiner
A few weeks ago, a new organization identifying itself as a "charity" appeared in Great Britain. It calls itself "Wikimedia UK", and its purported purpose is to "help collect, develop and distribute freely licensed knowledge (and other educational, cultural and historic material)." While at first glance there appears to be redundancy between the organization and the San Francisco based Wikimedia Foundation, it's clear that at least one trustee of the Wikimedia UK has a somewhat "cheekier" approach to free knowledge than his more conservative brethren in California.

At the time of this writing, a British educator named Edward Buckner is rallying an effort to persuade the UK Charity Commission to take a second look at Wikimedia UK's application for non-profit, tax-exempt status. Today, we interview Mr. Buckner, who taught at the University of Bristol. He is a writer who has recently completed a translation of the medieval philosopher John Duns Scotus and is now working on a book about Wikipedia. We touch base with him at home in London, to ask him about philosophy, working on Wikipedia, and why he thinks people shouldn't donate content to Wikipedia or money to the Wikimedia Foundation or Wikimedia UK.

Examiner: Edward, you have just spent four years completing a translation of and commentary on an early work by Duns Scotus, in collaboration with Jack Zupko, chair of the Philosophy department at the University of Winnipeg. Who was Duns Scotus, and why would anyone buy a book about him?

Buckner: Duns Scotus was a Franciscan philosopher and theologian who died in the early fourteenth century. I don't think many people will buy the book. If it is published, it will be published on the 'traditional model', sold at a fairly high price, mainly to university libraries, and students of medieval philosophy will get it out of the library. It's not for the general public, and you won't find it in even the largest consumer bookstores.

Examiner: That's pretty much against the whole philosophy of the Wikipedia movement, isn't it?

Buckner: It is, but it is hard to make a name in the academic world except by using the traditional model. There are signs this may be changing, but it's too late for my book. In any case, I publish other things under the free model.

Examiner: You mean in the Logic Museum?

Buckner: Yes. That's a collection of public domain medieval Latin texts, together with translations into English that I have released under a Wikipedia-style 'copyleft' license. That means anyone can publish it or use it, so long as under the same license and applying proper attribution. That's pretty much on the Wikipedia model. I'm very supportive of the free publishing model. Academic writers often don't earn anything from some of their work, so they might as well publish that sort of content free. The cost of learning should reflect the cost of teaching alone. In medieval times a university's reputation was partly based on its library, because of the high cost of a scribe copying a book. Printing, and more recently the advent of the Internet, should have changed that.

Examiner: But the Logic Museum, despite its content being in the public domain, is banned from Wikipedia isn't it?

Buckner: Correct. Due to a blacklist that was supposed to block spam, you can't make an outbound link to the Logic Museum, even though it contains hundreds of rare works, and it is the sole source anywhere in the world for many of them.

Examiner: That's because you are banned from Wikipedia, right? Why are you banned?

Buckner: More than two years ago, I accused someone of editing Wikipedia with a conflict of interest, who turned out to be an important member of their administration. In Wikipedia, that's called 'disruption', and it is a banishable offense. What a mistake that was!

Examiner: Doesn't Wikipedia have a policy about 'ignoring all rules' if it improves the encyclopedia?

Buckner: It does, but the nature of Wikipedia is that most of its administrators are amateurs, and many of them are also very young -- as young as my teenage children, often. Medieval philosophy, which was written hundreds of years ago, in fact nearly a thousand years ago, is completely unimportant and irrelevant to their lives. The administrator who blocked the link to the Museum mainly works on articles about the television show, Dr. Who. The science fiction series began in the 1960s, which for him is ancient history. He doesn't know any better. Which is a shame, because producing and distributing an encyclopedia is precisely about getting people to know better.

Examiner: And now you are campaigning against the recent charitable status of Wikimedia UK? Isn't that going to hurt Wikipedia?

Buckner: Not at all. People who donate to Wikipedia do so imagining that their money will go to the encyclopedia. You know, improving articles about bridges and Jane Austen and the UK economy and the capital of New Zealand. Even about Duns Scotus! In fact, the Wikimedia UK even laments how many unsuspecting donors make out their cheques payable to "Wikipedia".

Examiner: And the money doesn't go to that?

Buckner: Silly -- of course it doesn't. Wikipedia is written almost entirely by volunteers. They don't get paid anything at all. The Wikipedia servers cost something to run, but that is a fraction of the amount that the Wikimedia Foundation receives in donations. Removing Wikimedia UK's charitable status will not hurt Wikipedia one bit.

Examiner: So where is the Wikimedia UK money going?

Buckner: That's what I would like to know. The problem is that Wikipedia got completely taken over by a small group of people who are fanatical about 'open production' of knowledge. That's a way of working based on 'open source' software, where it is open to anyone to contribute. Most of the money you contribute to Wikipedia is going towards a sort of marketing campaign or movement to promote 'open production'. Think of Scientology, but with an Encyclopedia instead of E-meters.

Examiner: Isn't open access to knowledge a good idea, though?

Examiner: Would people donate if this distinction were made clear?

Buckner: I'm not sure they would. The 'open model' depends on anyone being able to contribute. This may work fine for software, where you need a certain basic expertise even to get started, but I'm not sure it translates to philosophy, or economics, or any of the humanities subjects. It's a worldview that Larry Sanger calls "epistemic egalitarianism". He says that Wikimedians are offended by the idea that a specific person might be regarded as more reliable on a given topic than the collective sum of everyone else. They feel that for everything to be as fair as possible and equal as possible, the only thing that ought to matter is the content (of a claim) itself, not its source. That's nonsense, of course.

Examiner: The other co-founder of Wikipedia, Jimmy Wales, said that no one should have the last word on truth, and that in an argument between a 17-year-old and a professor who has studied the subject for 40 years, "it often happens that the 17-year-old is right, and the professor is wrong".

Buckner: Which is also nonsense. It certainly doesn't happen 'often', and I have never seen it happen at all. Even if it happened sometimes, that would hardly justify the open model. The constant fighting with people whose ignorance is in inverse proportion to their arrogance is so off-putting that it drives the more knowledgeable people from the project. I have seen this happen many times. You would have to be insane in a quite special way to want to work on Philosophy articles in Wikipedia, for example.

Examiner: But don't Wikipedians argue that their model has 'worked'? Larry Sanger launched Citizendium, the main rival to Wikipedia, and that is widely regarded as having failed. Jimmy Wales would argue that Wikipedia is, by comparison, a success.

Buckner: Larry found it hard to attract experts to Citizendium -- probably for the reasons I mentioned above. The traditional publishing model works for academics, the open one cleary does not, at least as it currently stands. As for Wikipedia, I don't believe the model has worked, at least not in the sense of their model having produced quality content of a serious encyclopedic nature. As Sanger points out, you only have to compare the excellent Stanford Encyclopedia of Philosophy or The Internet Encyclopedia of Philosophy to Wikipedia's Philosophy section. Philosophy in Wikipedia is a complete mess, and experts in economics and history have told me it is pretty much the same in their areas.

Buckner: I'll echo Larry again. If it's Truth versus Equality, then as much as I love Equality, I'm on the side of Truth.

Examiner notes that Edward Buckner has repeatedly asked the Wikimedia UK trustees to share publicly the key information that they provided the Charity Commission, the information that provided assurances that the trustees exercise some level of control over the content of Wikipedia, especially those ever-contentious biographies of living persons. Thus far, the trustees have refused Buckner's repeated requests, even though the information ultimately would have to be made available under a Freedom of Information request, which is the next step.
Posted by Mercury at 5:36 PM