Doubts about the Higgs boson? 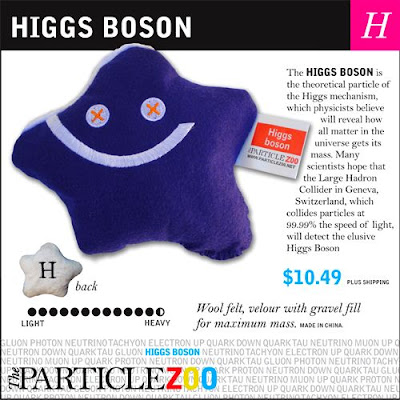 "Is the Higgs boson real?"

Rumours abound that Cern scientists have finally glimpsed the long-sought Higgs boson. We asked physicists to share their thoughts on the elusive entity.

guardian.co.uk
Soon after Rolf-Dieter Heuer, the director general at Cern, emailed staff about next Tuesday's seminar on the most sought-after particle in modern times, rumours hit the physics blogs that the lab might finally have caught sight of the Higgs boson.

I wrote last week that the heads of the two groups that work on the Atlas and CMS detectors at the Large Hadron Collider (LHC) will give the talks. That in itself is telling – usually more junior researchers present updates on the search for the missing particle.

Last month, scientists at the lab said that if the particle exists, it was most likely to have a mass somewhere between 114 and 141GeV (gigaelectronvolts), where one GeV is roughly equivalent to the mass of a proton, a subatomic particle found in atomic nuclei.

A couple of blogs, including viXra and Peter Woit's Not Even Wrong, have now posted rumours that the Atlas and CMS teams see Higgs-like signals around 125GeV, though they say the evidence is not robust enough to claim an official discovery.

If the rumours are right and precede a discovery, it means the Higgs boson weighs as much as two copper atoms. That fits quite well with a theory called supersymmetry, which gives physicists a way to unify the four known forces of nature, a feat that frustrated Einstein to the grave.

But enough of the rumours. When the seminar was announced – and before the rumours surfaced – I asked some physicists to share, in a couple of simple sentences, their hunches on what gives mass to fundamental particles. Is it the simplest version of the Higgs mechanism, which gives us what is called the Standard Model Higgs boson? Is it a more complex kind of Higgs field? Or something else entirely? I hoped the replies would give a flavour of the range of views they hold.

Most got back to me. A few kept their replies to a couple of sentences. Some included technical language, and perhaps that was inevitable. One Nobel prizewinner said the Higgs boson doesn't exist. Another responded with a limerick.

Before I list the replies, here is some background. The Higgs mechanism describes an invisible field that, it is argued, split one force into two soon after the birth of the universe. Specifically, it divided an ancient "electroweak" force into the electromagnetic and weak forces we see at work today. The latter is seen in some radioactive decay processes, and is involved in creating sunshine.

The simplest version of the Higgs boson is described by the Standard Model, a group of equations that explain how known particles interact with each other. There are plenty more complex versions though. Some of these could take ten years to rule out, according to Matt Strassler, a physicist at Rutgers University in New Jersey.

One more point. The Higgs field, if real, is responsible for only a tiny proportion of mass. Around 98% of mass of everyday objects comes from the energy stored up in the particles that make atomic nuclei, i.e. quarks that are bound together by gluons inside protons and neutrons. The Higgs field is thought to give mass to quarks and electrons, but that makes up only one or two percent of an object's mass. Let's say I weigh 80kg. That means less than a kilo comes from the Higgs field.

Here are the physicists' responses, in no particular order:

"They said when the collider goes on
Soon they'd see that elusive boson
Very soon we shall hear
Whether Cern finds it this year
But it's something I won't bet very much on."

"The Higgs mechanism for generating masses is extremely attractive and has no real competition. Beyond that there's little certainty. A near-minimal implementation of supersymmetry, perhaps augmented with ultra-weakly interacting particles, is the prettiest possibility. So I'd like several Higgs particles, Higgsinos, some ghostly stuff, and a pony."

[Note: A Higgsino is a supersymmetric partner of a Higgs boson].

"It is difficult to think of alternatives that are consistent theoretically and with everything observed to date that don't involve the Higgs mechanism – the process of essentially distributing a 'charge' throughout the vacuum. Elementary particles interact with this 'charge' and acquire mass. It is not necessarily clear, however, what is responsible for that charge in the first place and that is what determines what experiments will see.

"I still think the most likely answer is a conventional light Higgs boson. But when asked what I thought the odds were in a popular lecture, I surprised myself by saying 70%. I've even bet chocolate based on those odds. If not true, I think a heavier composite Higgs boson made up of more fundamental components might be the answer."

"We know that strong interactions of quarks and gluons provide the bulk of the proton's mass; I suspect that there are some new – very strongly interacting – particles that provide the masses for the fundamental particles. The most spectacular possibility is that these new particles are the magnetic monopoles that Paul Dirac predicted."

"You are mistaken about the Higgs search at Cern. The machine runs at half energy so far, and no one expects relevant (for the Higgs particle) results. After the shutdown [in 2013] the machine will gradually go up in energy, and if all goes well (this is non-trivial) then in about half a year the machine energy might reach design value and there might be Higgs-relevant results. So if you are thinking next week then you are mistaken. Of course, we never know what surprises nature has in store for us … It is my opinion that there is no Higgs."

"I doubt if the opinions of one who thinks about these problems perhaps every 30 years or so will carry much weight. I've been busy. But the last time I thought, I realised a) that the Higgs(-A) mechanism fits the facts too beautifully not to be true, but b) it must be incomplete, because there's no proper accounting of the vacuum energy."

[Note: Anderson essentially described the Higgs mechanism in 1962, two years before Higgs and five other physicists published the theory.]

"I expect some variant of the Standard Model is correct, such as a two-Higgs doublet theory, although later one could well discover the Higgs bosons to be composite particles. Discovery of neutrino masses has opened a window onto physics beyond the Standard Model, and discovery of the mass-generation mechanism for quarks and leptons will open it wider."

"It could be the Standard Model Higgs, but I sincerely hope not. Only data will reveal what nature chose, but two of my favourite alternatives are extra dimensions and supersymmetry – their discovery would tell us incredibly exciting things about several fundamental questions, including (but not limited to) the nature of space-time itself."

"The whole idea that something should give mass to the fundamental particles is a hype that resulted from over-commercialisation of the Higgs theory, which actually might backfire on us. Fact is that in our present theoretical descriptions, most of the mass terms in the equations for the fundamental particles appear to violate an important symmetry (chiral symmetry) unless they can be connected to an additional field, the Higgs field, which would also require the existence of a not yet discovered particle, the Higgs particle …

"However, since chiral symmetry is unavoidable for the inner consistency of our description of the fundamental particles, the beautiful theoretical prediction of a Standard Model Higgs particle still stands out, and I still consider the near discovery of such a particle very likely. Alternative descriptions, such as many Higgs particles, each of which are more difficult to detect, or some altogether different mechanism, are much less attractive theoretically. As we know from the history of science, this argument does not suffice to rule out the existence of such alternatives, but I consider them much less probable."

"Technicolor models use a new force of nature to generate particle masses. This new force is very strong, confining particles in bound states, and the binding energy gives the mass of the state. This is directly analogous to the generation of mass for the proton by the strong nuclear force."
Posted by Mercury at 6:35 PM