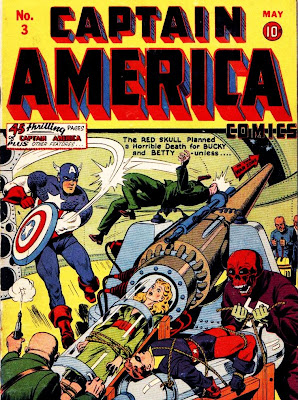 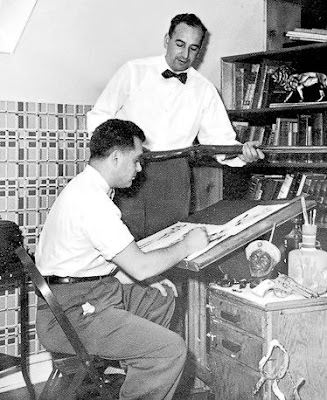 Los Angeles Times
Joe Simon, a comic book industry pioneer whose defining career moment came in the dark days of March 1941 when he delivered a star-spangled superhero named Captain America, has died. He was 98.

Simon died Wednesday night in New York City after a brief illness, according to a statement from his family, and his death adds a solemn final note to the 70th anniversary of his greatest creation, Captain America, who leaped across the big screen this summer with the Marvel Studios film "Captain America: The First Avenger." The film grossed $369 million in worldwide box office and earned strong reviews despite early skepticism about the 21st century pop culture potential of a Roosevelt-era character who looks like a walking American flag.

Simon created Captain America with Jack Kirby, a key figure in American comics, and they would work together for various publishers as comic books went from quirky confections to American mythology.

The American superhero concept began in 1938 with Superman, the creation of Jerry Siegel and Joe Shuster, but Simon and Kirby brought a different contribution to the genre, not unlike the way songwriter Chuck Berry would later add more ambition to the lyrics of the young form of rock 'n' roll. Mark Evanier, author of the 2008 Kirby biography "Kirby, King of Comics," said the signature duo became more of a brand than the masked men they put on the covers of their comics.

The pair had memorable creations such as the Newsboy Legion, the Fighting American, Blue Bolt, the Boy Commandos and the Challengers of the Unknown, but it was Captain America — a shield-carrying super-soldier created in a lab by American technology but defined by the country's earnest patriotism and integrity — that would resonate most.

"I was 24 when I first started creating Captain America, " Simon told the Philadelphia Daily News in 2005. "It's been a guardian angel hanging over me my whole life. Everywhere I went — in the service or wherever — I wasn't Joe Simon; I was Captain America. It was like a cloud hanging over me, but a good cloud. I loved it."

He was born Hymie Simon in Rochester, N.Y., in 1913, and as a youngster he was drawn to journalism. Instead, he ended up in the scruffy, deadline-driven comic book business that popped up in New York City in the 1930s. His first collaboration with Kirby came in 1940 with a hero called Blue Bolt, but they struck gold with Captain America — who was punching Adolf Hitler on newsstands months before Pearl Harbor. It turned out to be a quick hit for Timely Comics, which would later become Marvel Comics.

Simon, who was both a writer and artist, came up with the concept of the red, white and blue character, but it was Kirby — by most appraisals the most important comics artist ever — who created the dynamic artwork in the early issues.

After the success of "Captain America," Simon and Kirby followed opportunity over to DC Comics, the publisher of Superman and Batman, where they worked on titles such as "Boy Commandos" and "Sandman."

Both went into the military in 1943. On their return. they ended up at Harvey Comics and toiled on titles including "Boy Explorers" and "Stuntman." In 1954, the pair launched the creator-owned "Fighting American," a clear conceptual descendant of their most noted character — a hero with a shield and a costume Betsy Ross would love.

In the 1960s, Kirby began working with a new partner, Stan Lee, and they created the Fantastic Four, Thor, Hulk, the X-Men, Iron Man and others.

Simon founded and edited Sick magazine, a publication that took the model of MAD magazine and ran from 1960 to 1980. He also packaged educational and political comics for various agencies, mostly in New York, and occasionally dipped back into the comics world, with oddball efforts like 1968's hippie hero "Brother Power, the Geek" and 1974's "Prez," about a teenager who becomes president.

Those comics were strange, politically informed and commercial fizzles, but they were fascinating to readers such as Neil Gaiman, the Newbury Medal-winning author of "The Graveyard Book" and the writer behind the DC Comics epic "The Sandman."

"What attracted me to Simon's stories was how unlike anyone else's they were, how full of life," Gaiman wrote in 2010 in a foreword to "The Simon & Kirby Superheroes" collection from Titan Books. "He created strange villains, part cartoon, part caricature, part embodiment of whatever he wished to talk about. While the trends in comics were toward realism in writing, Joe Simon marched in the other direction, creating his own reality.... The oddness of Joe Simon's work is where it gets its power."

Earlier this year, Simon attended the premiere of the Captain America film and in the surge of media attention he spoke often about Kirby, who died in 1994. For a younger generation of creators — such as Ed Brubaker, who has been the award-winning writer for Captain America for the last seven years — Simon and Kirby are titan figures.

"Joe and Jack Kirby created Captain America at a time when the U.S. was not in World War II yet and had to contend with pro-fascist Americans giving them death threats," Brubaker said Thursday. "I always think about that when I work on the book, the origins of both the character and the comic. Those were two brave guys creating what would be a classic character, who has definitely stood the test of time while other 'flag-wearing' heroes haven't."

Joe Simon [Wikipedia]
Posted by Mercury at 6:24 AM