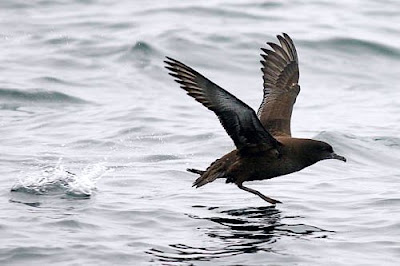 "Mystery of incident that inspired 'The Birds' solved?"

Dying and disoriented seabirds rammed themselves into homes across California's Monterey Bay in the summer of 1961, sparking a long-standing mystery about the cause among marine biologists. The avian incidents sparked local visitor Hitchcock's interest, along with a story about spooky bird behavior by British writer Daphne du Maurier.

"I am pretty convinced that the birds were poisoned," says ocean environmentalist Sibel Bargu of Louisiana State University in Baton Rouge. She led a team finding that naturally occurring toxins appear to have been the culprit.

Call it the Case of the Poisoned Plankton. Looking at the stomach contents of turtles and seabirds gathered in 1961 Monterey Bay ship surveys, Bargu and colleagues have now found toxin-making algae were present in 79% of the plankton that the creatures ate. In particular, the team finds in the current Nature Geoscience journal that the leading toxin inside the plankton was a nerve-damaging acid, which causes confusion, seizures and death in birds.

A similar algae bloom contaminated mussels that caused the death of four people in Canada's Prince Edward Island in 1987.

Most likely, the 1961 seabirds ate anchovies and squid loaded with the brain-damaging acid. "All the symptoms were extremely similar to later bird poisoning events in the same area," Bargu says.

"This is the most compelling evidence so far that there's a direct link," says University of Southern California plankton expert Raphael Kudela, not part of the study team. In a 2008 report Kudela and colleagues pointed to the toxic acid as the likely 1961 culprit and also first reported that septic tank leaks may have fed the toxic algae, rather than farm fertilizers long blamed. "It is to some extent a natural phenomenon, and the best thing we can do is monitor for the presence of toxins, and treat impacted wildlife," he adds.

In a Hitchcock-style twist, therefore, leaky septic tanks installed amid a housing boom around Monterey Bay in the early 1960s perhaps led to the poisoned birds plummeting from the air in 1961. And they inspired a film that scared the bejabbers out of filmgoers worldwide two years later, one ranked among the American Film Institute's Top 10 thrillers of the last century.


Alfred Hitchcock’s "The Birds"...a fine analysis
Posted by Mercury at 7:07 AM

Email ThisBlogThis!Share to TwitterShare to FacebookShare to Pinterest
Labels: "The Birds", Hitchcock, natural death of seabirds