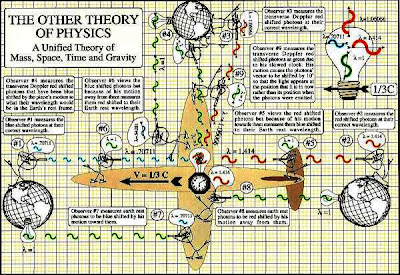 Scientific American
All science writers, especially those of us who cover particle physics and other fields that purport to reveal ultimate reality, hear from cranks. Pre-email, I got envelopes stuffed with manuscripts, sometimes hundreds of pages long, from people unaffiliated with any research institution known to me. Some letters were so baroque—the text hand-written in shifting scripts and colors, veering between technical and mystical arcana, adorned with fantastical diagrams—that their authors had to be floridly psychotic. Lucid or not, the writers invariably wanted to inform me of a revolutionary new theory that would solve the mystery of, well, everything. If I helped reveal this Truth to the world, I could share the glory!

A couple of decades ago, I made the mistake of faxing an ironic response to what I thought was an ironic faxed letter. The writer—let’s call him Tachyon Tad—had “discovered” a new physics, one that allowed for faster-than-light travel. In my reply, I told Tad that if he built a warp-drive spaceship, I’d love to hitch a ride. Dumb joke. For months, my fax machine churned out sheets covered with Tad’s dense elaborations of his theory and plans for a superluminal machine.

After that, I simply chucked cranky letters. What else was I supposed to do? I had neither the time nor wherewithal to find the flaws in their logic, any more than I could double-check the math that yields, say, quantum electro-dynamics or some spiffy new variant thereof. As a mere journalist, I relied on experts to do that for me, especially ones at fancy institutions like Caltech and Cambridge, who presumably had been thoroughly vetted. My job isn’t to uncover scientific truth, I told myself, but to report on what professional scientists think the truth is.

But cranks have always haunted me. Who, I wondered, are these people, toiling in feverish obscurity over their wildly ambitious theories? And how could I be so sure that Tad, say, is not a loon but a genius? Couldn’t he (and almost all the cranks who write me are male) be the real deal? What is the difference, really, between cranks and experts? Just as experts are often wrong, can’t cranks occasionally be right?

My friend Margaret Wertheim, an Australian-born science writer who unlike me has a degree in physics, couldn’t set these questions aside. In the early 1990s, she began collecting manuscripts from “outsiders,” as she calls them, and even corresponding with them. In 1995, when she was in Tacoma, Washington, to give a talk, she drove 30 miles to a trailer park perched on the edge of the Green River Gorge. There she met Jim Carter, owner of the trailer park, whose lavishly illustrated manuscript on “circlon synchronicity” had captured Wertheim’s imagination. (See the image above for an example of Carter’s graphic talent.) Carter’s theory, which began germinating in him when he was still a teenager in the early 1960s, explained all the “mysteries and paradoxes that have plagued physical science for centuries,” as he put it, in terms of circlons, which are springs made of smaller springs.

Carter turned out to be not a reclusive schizophrenic but a charming, ruggedly handsome husband and father. A self-taught jack of all trades, he was a former abalone diver, meteorite-hunter, gold miner and inventor. His most successful creation was the “lift bag,” an inflatable device with which the U.S. Navy, Coast Guard and salvage companies resurrect sunken objects. To provide experimental evidence of his circlon theory, Carter cobbled together three trash cans, rubber sheets and a disco smoke machine into a contraption for blowing smoke rings. The experiment worked.

In her immensely entertaining new book Physics on the Fringe: Smoke Rings, Circlons, and Alternative Theories of Everything (Walker & Company), Wertheim tells the tale of Carter, who became her close friend, and embeds it within a history of outsider physics. She traces the phenomenon back deep into the 19th century, when the British mathematician Augustus De Morgan collected hundreds of examples of “paradoxers,” whom he defined as people who held views “apart from the general opinion” in science, mathematics and other fields. Just as modern cranks often declare that Einstein was wrong, so did 19th-century paradoxers tout the superiority of their ideas to those of Newton.

De Morgan pointed out that some paradoxers were mainstream figures. “From the ridiculous to the sublime is but a step,” De Morgan commented. “Which is the sublime, and which the ridiculous, every one must settle for himself.” The 17th-century scholar John Wilkins, a master of Trinity College, Cambridge, and a founder of the Royal Society, speculated that wild geese were capable of flying to the moon. Newton, the supreme embodiment of scientific reason, filled his notebooks with all manner of wacky theological and alchemical conjectures.

Unfair, you say, to judge past masters from our modern vantage point? Some giants of 20th-century science were cranky, too, even by standards of their time. The famously hard-nosed quantum theorist Wolfgang Pauli was fascinated by extrasensory perception and other paranormal phenomena. The chemist Linus Pauling spent his final decades insisting, in the face of strong counter-evidence, that massive doses of vitamin C could treat a wide range of disorders, from colds to cancer. (My mother, a Pauling devotee, doled out huge vitamin C pills to me and my siblings in the late 1960s.)

My favorite modern paradoxer was the British astronomer Fred Hoyle, who coined the term “big bang” (although he loathed the theory) and helped elucidate how light elements fuse into heavy ones in the cores of stars. He once tried to convince me that the AIDS virus was a U.S. military experiment that had gone awry, and that flu viruses came from outer space. To paraphrase Alexander Solzhenitsyn: The line between brilliance and looniness runs through every great scientist’s brain.

Great scientists are great because they discern patterns in the flux of nature that elude us ordinary mortals; we should not be surprised when some patterns turn out to be illusory. Indeed, whole fields can descend into crankiness. Wertheim serves up her philosophical punch line toward the end of her book, when she turns her attention to mainstream physics and cosmology. She shares my sense that some popular suppositions—notably the notion that reality consists of extremely tiny strings wriggling in hyperspaces of a dozen or more dimensions, or that our universe is just one of an infinite number of universes—verge on pseudoscience, because they are even less experimentally testable than Jim Carter’s circlon theory.

Wertheim calls a 2003 conference on string theory and cosmology “by far the most surreal physics event I have ever been to.” She likens it to “a sugar-fueled children’s birthday party or the Mad Hatter’s Tea Party,” with each presenter floating speculations that everyone else considered to be “unsupported by evidence and based entirely on arbitrary assumptions.” Far from fringe figures, the attendees included Stephen Hawking of Cambridge, Brian Greene of Columbia, Lisa Randall of Harvard and other stars of modern physics.

On the other hand, Wertheim is gently, affectionately skeptical of the outsider physicists, too. In the 1990s, she notes, Jim Carter and other outsiders formed an organization, the Natural Philosophy Alliance, which hosts events and maintains a Web site where, as Wertheim puts it, outsiders “can publish their ideas without fear of censure.” When Wertheim attended an NPA meeting in Grand Junction, Colorado, it reminded her of The Three Christs of Ypsilante (1964) by the psychiatrist Milton Rokeach. The book describes an experiment in which three schizophrenic patients, each of whom believed he was Christ, were introduced to each other in a mental hospital in Ypsilante, Michigan. Each concluded that the others were crazy.

Watching presenters at the Grand Junction meeting, Wertheim comments , was like “watching thirty Jesus Christs. Everybody had the Answer. Everbody was the One.” Yet given how far mainstream physics has drifted from empirical evidence, she suggests, perhaps we should judge all physics theories by their beauty, elegance and craftsmanship. And just as the art world occasionally embraces outsiders who lack formal training, so perhaps physics—and physics writers—should look more favorably upon the imaginings of autodidacts like Jim Carter.

So what do I do with my crank—I mean, outsider—mail now? As it happens, a couple are sitting in my inbox. One claims to have predicted the recent report (which I bet will not hold up) that neutrinos travel faster than light. Echoes of my old friend Tachyon Tad! I wish I could say I read these letters carefully, appreciating their unique aesthetic qualities, but I don’t. I still just delete them. I’m too busy working on my own fringe theories to help others with theirs.

[Author's note: This column is adapted from an essay published last month in The Chronicle of Higher Education.]
Posted by Mercury at 11:03 AM

Email ThisBlogThis!Share to TwitterShare to FacebookShare to Pinterest
Labels: truth in science