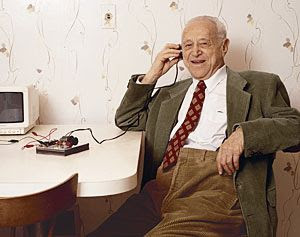 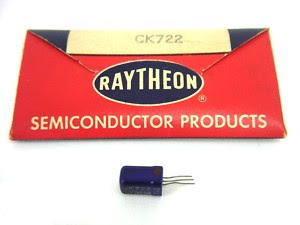 "Norman Krim, Who Championed the Transistor, Dies at 98"

The New York Times
Norman Krim, an electronics visionary who played a pivotal role in the industry’s transition from the bulky electron vacuum tube, which once lined the innards of radios and televisions, to the tiny, far more powerful transistor, died on Dec. 14 in a retirement home in Newton, Mass. He was 98.

The cause was congestive heart failure, his son Robert said.

Mr. Krim, who made several breakthroughs in a long career with the Raytheon Company and who had an early hand in the growth of the RadioShack chain, did not invent the transistor. (Three scientists did, in 1947, at Bell Laboratories.)

But he saw the device’s potential and persuaded his company to begin manufacturing it on a mass scale, particularly for use in miniaturized hearing aids that he had designed. Like the old tube, a transistor is a semiconductor that amplifies audio signals.

As Time magazine wrote in 1953: “This little device, a single speck of germanium, is smaller than a paper clip and works perfectly at one-tenth the power needed by the smallest vacuum tube. Today, much of Raytheon’s transistor output goes to America’s hearing aid industry.” (Germanium, a relatively rare metal, was the predecessor to silicon in transistors.)

That was just the start. “Now there are over 50 million transistors on a single computer chip, and billions of transistors are manufactured every day,” Jack Ward, curator of the online Transistor Museum, said in an interview. “Norm was the first to recognize the potential and led Raytheon to be the first major transistor manufacturer.”

Thousands of hearing-disabled people benefited from Mr. Krim’s initial use of the transistor in compact hearing aids. But not every transistor Raytheon made was suitable for them, he found.

“When transistors were first being manufactured by Raytheon on a commercial scale, there was a batch called CK722s that were too noisy for use in hearing aids,” said Harry Goldstein, an editor at IEEE Spectrum, the magazine of the Institute of Electrical and Electronics Engineers.

So Mr. Krim contacted editors at magazines like Popular Science and Radio Electronics and began marketing the CK722s to hobbyists.

“The result was that a whole generation of aspiring engineers — kids, really, working in their garages and basements — got to make all kinds of electronic projects,” Mr. Goldstein said, among them transistor radios, guitar amplifiers, code oscillators, Geiger counters and metal detectors. “A lot of them went on to become engineers.”

Before the transistor, Mr. Krim had already made significant contributions to the industry. In 1938 he led a Raytheon team that developed miniaturized vacuum tubes for use in battery-powered radios. He also realized that the small tubes could replace cumbersome packs that hearing-aid users had to strap onto themselves in those days.

“Zenith, Beltone, Sonotone are some of the American companies that used his improved, more affordable hearing-aid technology,” said Chet Michalak, who is writing a biography of Mr. Krim. “His devices were about the size of today’s hand-held phones.” They were also a precursor to the transistor hearing aid his team later developed.

Norman Bernard Krim was born in Manhattan on June 3, 1913, one of four children of Abraham and Ida Krim. His father owned several luncheonettes. By the age of 12, he was tinkering with the refrigerator motor in his home.

After graduating from George Washington High School at 16, he was accepted at the Massachusetts Institute of Technology, where in his junior year he built an “electrical brain” that, according to newspaper articles at the time, seemed to be able to make childlike choices, deciding whether it preferred beets or spinach, for example.

“He considered it a carnival act,” Mr. Michalak said.

Raytheon hired Mr. Krim after his graduation in 1934, at 50 cents an hour. By the time he left the company in 1961, he was vice president of the semiconductor divisions.

Mr. Krim’s wife of 52 years, the former Beatrice Barron, died in 1994. Beside his son Robert, he is survived by another son, Arthur, and four grandchildren. Another son, Donald, a leading film distributor, died in May.

After leaving Raytheon, Mr. Krim bought two electronics stores in Boston called RadioShack. By the time he sold the business to the Tandy Corporation two years later, it had seven stores; today the chain has about 7,300.

Mr. Krim was a marketing consultant to Raytheon and several other companies until 1997.

Transistor Museum
Posted by Mercury at 6:02 AM