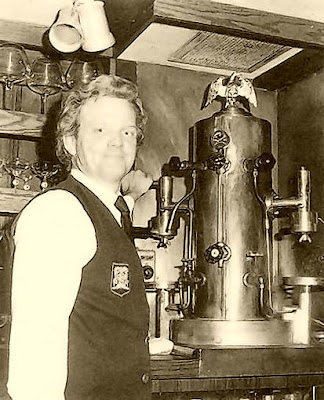 Bob Hare opened the Insomniac in 1958. It soon became a haven for folk and blues musicians and other performers, including Allen Ginsberg, Lenny Bruce and a young Linda Ronstadt.

Los Angeles Times
When Bob Hare opened his Hermosa Beach coffeehouse in 1958, he called it the Insomniac because it was open until 3 a.m.

He brewed his coffee in a 300-pound dry-cleaning boiler and served it to such high-profile members of the Beat Generation as Allen Ginsberg and Lenny Bruce, he later recalled.

The coffeehouse also became a haven for folk and blues musicians and other performers. Ginsberg read his poem "Howl" and a 16-year-old Linda Ronstadt sang, Hare said in 1992 in The Times.

Hare, who later became a counselor, died of natural causes Dec. 19 at his home in Glendora, said his wife, Karen. He was 80.

There was money to be made in serving coffee at 50 cents to $1 per cup, he told The Times in 1959 when his coffeehouse was reported to be one of only two in the South Bay.

As the Insomniac expanded to include a bookstore, art gallery, and book and record departments, Hare billed it as "America's First Supermarket of Culture."

One night in 1962, he advertised a bill that included blues singer Brownie McGhee and harmonica player Sonny Terry; Mel Carter and the Gospel All-Stars; and "a new folk trio," the Landsmen.

The Insomniac was a "hotbed" for musicians as well as artists and writers "involved in the Beatnik movement," according to the Hermosa Beach Historical Society.

Hare saw Hermosa Beach as having "a tinge of Greenwich Village" and the makings of a "real art colony," he said in the 1959 Times article, which referred to him as an oil painter and a force behind a sidewalk art fair.

In 1963, the coffeehouse was forced to close when Hermosa Beach seized it through eminent domain and turned it into a parking lot, his wife said.

The Insomniac "was a jewel. It really was," Hare said in 2008 during a public reading of his poetry. The CD he recorded of his poems is called "The Insomniac."

Robert Ray Hare was born July 5, 1931, in Cedar Rapids, Iowa, and moved to California at an early age.

After earning a bachelor's degree in English from Cal State Long Beach, he joined the Navy and flew nearly 50 seaplane missions during the Korean War, his wife said.

They met at a Swedenborgian church in Los Angeles, where he later became a minister. The vocation proved useful during his 25 years as a counselor at the Pacific Lodge Boys' Home, a residential program in Woodland Hills for boys with emotional or behavioral problems. He retired in 1994.

"Since he was there so long," his wife said, "a lot of the boys came back so that he could perform their marriages."

In addition to Karen, his wife of 36 years, Hare is survived by his daughter, Holly, of Huntington Beach.
Posted by Mercury at 11:22 AM