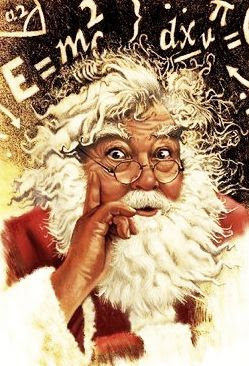 Roger Highfield
Christmas may be a fun time for most of us...But for Santa it's all rather hard work...

On the Christmas cards, it all looked so effortless. Apart from the occasional slip-up with drunken reindeer, narrow chimneys and blizzards, Santa manages to deliver millions of gifts on Christmas Eve, maintaining his smile and benevolence all the while. His support team: a few reindeer and a handful of diligent elves.

Clearly, only an innocent child would swallow this propaganda, a fantasy peddled by generations of Christmas cards to divert attention away from what is undoubtedly the most spectacular research-and-development outfit this planet has ever seen.

I like to think that somewhere under the North Pole there is a handful of scientists experimenting with the latest in high-temperature materials, genetic computing and technologies and warped geometries of time and space, all united by a single purpose: to make millions of children happy each and every Christmas. Put yourself in Santa's fur boots: how does he know where children live, and what gifts they want? How can he fly in any weather, circle the globe overnight, carry millions of pounds of cargo and make silent, rooftop landings with pinpoint accuracy? Some years ago, Spy Magazine examined these issues in an article that has since proliferated across the Internet. The magazine concluded that Santa would require 214,200 reindeer and, with the huge mass of presents would encounter 'enormous air resistance, heating the reindeer up in the same fashion as a spacecraft re-entering the Earth's atmosphere.' In short, it continued, 'They will burst into flames almost instantaneously, creating deafening sonic booms in their wake. The entire reindeer team will be vaporized within 4.26 thousandths of a second. Santa meanwhile, will be subjected to forces 17,500.06 times greater than gravity…In conclusion - if Santa ever did deliver presents on Christmas Eve, he's dead now.'

The point is, Santa is not dead. He delivers presents every Christmas Eve, as reliably as Rudolph's nose is red. If he overcomes the kinds of problems outlined above, it can only be with the aid of out-of-this-world technology.

Santa has a huge market: there are 2,106 million children aged under eighteen in the world, according to the United Nations Children's Fund UNICEF. Given the pagan origins of the festival and the emphasis on charity, we can assume that Santa will deliver presents to each and every child and not just Christian children or the 191 million who live in industrialised countries. It is Christmas after all.

The Giving of Gifts:

Every Christmas Eve, Santa has to travel a distance equivalent to the number of chimneys - 842 million - multiplied by this average spacing between households, which works out to be 365 million km (221 million miles). This sounds daunting, particularly given that he must cover this distance in a single night. Fortunately, Santa has more than twenty-four hours in which to deliver the presents. Consider the first point on the planet to go through the International Date Line at midnight on 24 December. From this moment on, Santa can pop down chimneys. If he stays right there, he will have twenty-four hours to deliver presents to everyone along the date line. But he can do better than this, by travelling backwards, against the direction of rotation of the Earth. That way he can deliver presents for almost twenty-four hours to everywhere else on Earth, making forty-eight hours in all, which is 2,880 minutes or 172,800 seconds.

From this, one can calculate that Santa has little over two ten-thousandths of a second to get between each of the 842 million households. To cover the total distance of 356 million km (221 million miles) in this time means that his sleigh is moving at an average of 2,060 km (1,279 miles) per second. Ignoring quibbles about air temperature and humidity, the speed of sound is something like 1,200 km (750 miles) per hour, or 0.3 km (0.2 miles) per second, so Santa is achieving speeds of around 6,395 times the speed of sound, or Mach 6395.

When a sleigh, or indeed any object, exceeds the speed of sound, there will be at least one sonic boom. This is a shock wave sent out when the sleigh catches up with pressure waves it generates while moving, explains Nigel Weatherill of the University of Wales, Swansea, who helped the Thrust Supersonic Car break the sound barrier in 1997.

Santa, however, does not generate any sonic booms on Christmas Eve. In his book Unweaving the Rainbow, Richard Dawkins says he has used this fact to disprove the existence of Santa to a six-year-old child. To a biologist this may indeed seem persuasive but, to an aerodynamics engineer, it suggests that Santa has found a way to suppress sonic booms. For example, says Nigel Weatherill, perhaps Santa cancels the peaks and troughs in the shock wave with troughs and peaks of 'antisound' generated by a specialised speaker on his sleigh.

The speed of light is absolute and cannot be exceeded, so we should check that Santa is not breaking cosmic law. The usual figure for the speed of light is 300 million meters per second (984 million feet) which, given that there are 1,000 metres per kilometre (5,280 feet per mile), works out to be 300,000 km (186,000 miles) per second. Santa is comfortably within this limit, travelling at around one-145th of the speed of light - too slow to worry about the implications of Einstein's theory of relativity. This assumes, however, that Santa throws the presents down the chimney while passing overhead. In fact, he stops at each house so that he has to achieve double the speed calculated above (form a standing start, he has to travel the distance between each house in two-10,000ths of a second). That means going from 0 to 4,116 km (2,558 miles) per second in two-10,000ths of a second, an acceleration of 20.5 million kilometres (12.79 million miles) per second per second, or 20.5 billion metres (67.3 billion feet) per second per second.

The acceleration due to gravity is a mere 9.8 metres (32ft) per second per second, so the acceleration of Santa's sleigh is equivalent to about two billion times that caused by the gravitational tug of the Earth. Given that Santa is excessively overweight, say around 200kg (30 stone), the force he will feel is his mass times his acceleration: around 4,000 billion newtons. Even fighter pilots can't cope with accelerations more than a few times that of gravity: they have to use special breathing and so called g-suits to keep the blood in their head. Santa would have to cope with around 2 billion times this acceleration. As the physics professor Lawrence Krauss put it, that would reduce our fat friend to 'chunky salsa'.

Krauss has considered similar problems in his work on the physics of Star Trek. The starship Enterprise gets by with devices called 'inertial dampers' to cushion the forces that Captain Kirk feels in the seat of his pants. Santa has to resort to similar tactics, creating an artificial world within his sleigh in which the reaction force that responds to the accelerating force is cancelled, perhaps by some kind of gravitational field.

There is one other problem Santa has to contend with. His cargo of toys. Assuming that each of the 2,106 million children gets nothing more than a medium -sized construction set (900g or 2lb), he has a load of 1,895 million kg (4212 million lb) to convey. Then there is also his supply of fuel to achieve these huge speeds.

Any way you look at it, Santa has some serious hurdles to overcome.

The US Air Force 48th Fighter Wing claims to use satellite dishes to track Santa on Christmas Eve, with other Air Force Space Command squadrons around the world, to prevent the unnecessary scrambling of interceptor aircraft and ensure the safe arrival of 'the Jolly Old Elf' and all his presents. 'We have some of the most sophisticated equipment in the world. The deep space tracking system was constructed at a cost of over $600 million. Santa is in good hands,' said Tech. Sgt. Ray Duron, Crew Chief of the 5th Space Surveillance Squadron at RAF Feltwell, which coordinates the route of his sleigh with the 1st Command and Control Squadron in Colorado Springs.

Given the extraordinary array of technology already used by Santa, much of which is beyond the capabilities of the US military, this annual 'Santa Track' - which dates back to 1957 - seems unnecessary. Indeed, some might say it is merely a publicity stunt engineered by defence scientists to draw attention away from the vast range of scientific and technological achievements pioneered by Santa to ensure children across the world are not disappointed on Christmas morning.
Posted by Mercury at 8:50 AM

He doesn't deliver presents only to those under 18. Eternal children like me and/or those who measure our ages in Plutonian years get visits and presents too, thereby changing the equation.

How badly is global warming messing with Santa's workshop at the North Pole? Have there been any major floods yet?

Well Laurel, you are one of the lucky ones...when one gets wayyyyyy 18 the equation really changes.

Actually the warmer weather is moving slightly North...some of the permafrost areas are changing.