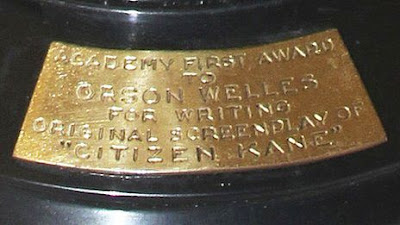 BBC NEWS
The Oscar awarded to Orson Welles for writing Citizen Kane is to be auctioned in Los Angeles later this month.

Despite some tarnishing on the legs, the Oscar is "overall in very good condition," according to auction house Nate D Sanders.

It is the second time the Oscar has been on the auction block, after it failed to sell in 2007.

The award itself has had a colourful history - Welles believed he had lost it, but it resurfaced after his death when it was put up for auction in 1994 by a cinematographer who claimed the filmmaker had given it to him as a form of payment.

Welles' daughter Beatrice sued and won back ownership of the Oscar, but she was then sued herself by the Academy of Motion Picture Arts and Sciences - which gives out the awards - when she tried to auction it in 2003.

In a bid to stop public sales, the Academy introduced an agreement in 1950 that banned winners from selling their Oscars to anyone but the Academy for the nominal sum of $1 (64p).

After a legal battle, Beatrice Welles won the right to sell the statuette and sold it to a US charitable foundation, who in turn unsuccessfully tried to auction it at Sotheby's in New York in 2007.

In that instance, it was expected to sell for a similar amount, but it is now believed the movie memorabilia market is much stronger.

"There has been so much movie memorabilia that has been selling for high prices," spokesman Sam Heller said.

"People are just willing to spend a lot of money to buy these things, whether as an investment or as a collector."

Although Citizen Kane received nominations for best screenplay, best director and best leading actor for Welles, the writing award was the only competitive Oscar awarded to him throughout his life.

He collected an honorary Academy Award for his life's work in 1971. 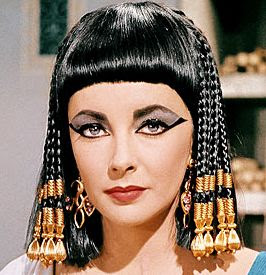 guardian.co.uk
Famous hairpiece from 1963 screen epic could fetch up to $11,000 at auction.

One of the most famous cinematic hairstyles of all time, the wig worn by Elizabeth Taylor in the 1963 film Cleopatra, has emerged for auction.

Made of dark brown human hair, the wig (pictured left) is styled in a long bob with bangs and braids adorned with gold-coloured beads and coils. Taylor wore it when her character tried to convince Caesar (Rex Harrison) to accept supreme control of the empire.

After filming, the wig was kept by its British wigmaker, Stanley Hall, who then passed it on to a Hollywood makeup artist. It is now being sold by Heritage Auctions of Dallas, Texas, and is set to fetch around $11,000 (£,7000).

Margaret Barrett of Heritage Auctions said: "Cleopatra was filmed in Italy and Stanley Hall, who was an international wigmaker to the stars, made all the wigs for it. Elizabeth Taylor's character had tens of different hairstyles in the film and there were three wigs for each style.

"About 30 years ago Stanley Hall gave the vendor about 40 or 45 wigs from the film. Of all the wigs used in Cleopatra this must be the most iconic. If you think of the movie and Elizabeth Taylor in it you can see her in this wig.

"It is made of real human hair and has gold beads woven into it. It looks very authentic and is a real quality wig.

"Elizabeth Taylor has only recently passed away and she was one of the last great movie stars and there is a lot of interest in memorabilia related to her at the moment," she added.

Cleopatra was the most expensive film of its day, with lavish sets and costumes. Taylor went on to twice marry another of the film's stars, Richard Burton (Mark Antony).

Following her death earlier this year, the Guardian's film critic, Peter Bradshaw, wrote that Cleopatra was the role Taylor was born to play, a role of "atom-splitting power" that "ignited a new global gossip industry".