That time of year..."snowflake" talk 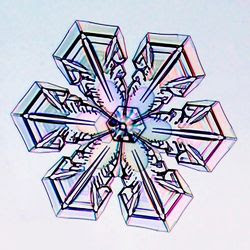 We had our first snowfall early in the dark this morning...just a trace. So now we take up snowflakes again.
"Snowflake science"

R&D
We've all heard that no two snowflakes are alike. California Institute of Technology (Caltech) professor of physics Kenneth Libbrecht will tell you that this has to do with the ever-changing conditions in the clouds where snow crystals form. Now Libbrecht, widely known as the snowflake guru, has shed some light on a grand puzzle in snowflake science: why the canonical, six-armed "stellar" snowflakes wind up so thin and flat.

Few people pay close attention to the form that snow crystals—snowflakes—take as they fall from the sky. But in the late 1990s, Libbrecht's interest in the tiny white doilies was piqued. The physicist, who until then had worked to better understand the sun and to detect cosmic gravitational waves, happened across an article describing one of many common snowflake structures—a capped column, which looks something like an icy thread bobbin under the microscope. Such a snowflake starts out, as all do, as a hexagonal crystal of ice. As it grows, accumulating water molecules from the air, it forms a tiny column. Then it encounters conditions elsewhere in the cloud that promote the growth of plate-like structures, so it ends up with plate-like caps at both ends of the column.

"I read about capped columns, and I just thought, 'I grew up in snow country. How come I've never seen one of these?'" Libbrecht says. The next time he went home to North Dakota, he grabbed a magnifying glass and headed outside. "I saw capped columns. I saw all these different snowflakes," he says. "It's very easy. It's just that I had never looked."

Since then, he has published seven books of snowflake photographs, including a field guide for other eager snowflake watchers. And his library of snowflake images boasts more than 10,000 photographs. But Libbrecht is a physicist, so beyond capturing stunning pictures, he wanted to understand the molecular dynamics that dictate how ice crystals grow. For that, he's developed methods for growing and analyzing snowflakes in the laboratory.

Now Libbrecht believes he's on his way to explaining one of the major outstanding questions of snowflake science—a question at the heart of his original interest in capped columns all those years ago. Scientists have known for more than 75 years that at conditions typically found in snowflake-producing clouds, ice crystals follow a standard pattern of growth: near -2 C, they grow into thin, plate-like forms; near -5 C, they create slender columns and needles; near -15 C, they become really thin plates; and at temperatures below -30 C, they're back to columns. But no one has been able to explain why such relatively small changes in temperature yield such dramatic changes in snowflake structure.

Libbrecht started his observations with the thinnest, largest plate-like snowflakes, which form around -15 C in high humidity. Some of these snowflakes are about as sharp as the edge of a razor blade. "What I found in my experiments," Libbrecht says, "is a growth instability, or sharpening effect." He noticed that as a snow crystal develops at -15 C, the top edge starts to develop a little bump of a ledge, which gets sharp at the tip. Basically, the corners stick out a bit farther toward the moist air, so they grow faster. And a cycle begins: "As soon as the ledge gets a little bit sharper, then it grows faster, and if it grows faster, then it gets sharper still, creating a positive feedback effect," Libbrecht says. "In the atmosphere, it would just get bigger and bigger and thinner and thinner, and eventually you'd get a really nice, beautiful snowflake."

If this sharpening effect occurs at other temperatures, which is likely, then it explains how small changes in temperature can yield such wildly varying snowflake structures. "The sharpening effect can yield thin plates or slender columns, just by changing directions," Libbrecht says. "That's a big piece of the puzzle, because now you don't have to make these enormous changes to get different structures. You just have to explain why the instability tips to produce plates at some temperatures, and tips to make columns at other temperatures. The flip-flopping of the sharpening effect nicely explains how the ice growth rates can change by a factor of 1,000 when the temperature changes by just a few degrees.”

Libbrecht can't yet fully explain the underlying molecular mechanisms that produce the sharpening effect or exactly why different temperatures lead to sharpening on different faces of growing snow crystals. "But," he says, "this is a real advance in snowflake science. Now you can explain why the plates are so thin and the columns are so tall."

Snowglobes
Posted by Mercury at 9:29 AM

Email ThisBlogThis!Share to TwitterShare to FacebookShare to Pinterest
Labels: snowflakes