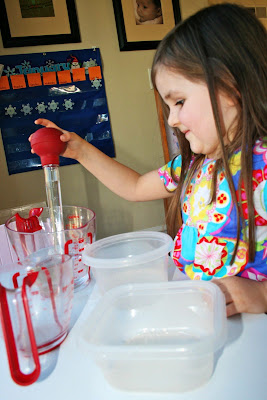 USA TODAY
At this time of year, stores are packed with toys that claim to be educational. But teachers say some of the most creative gifts and activities for kids can be made at home, often for just pennies.

"Kids are already scientists. You just have to avoid squashing that instinct," says Bob Hirschon, who works on children's science programs at the American Association for the Advancement of Science. "They are already interested in finding new things and being detectives. That is what science is."

Parents can save money and teach kids about everything from chemistry to fractions just by mixing up home-made Play-Doh, says Jennifer Farrington, president and CEO of the Chicago Children's Museum. Parents can be more ambitious with older kids, helping them create home-made marble runs — which offer lessons in physics and engineering — with wood, pipes and other hardware store staples. Farrington says her son's favorite building projects involve controlled mayhem, such as homemade marshmallow blowers and catapults.

Do-it-yourself science experiments also are a great way to keep kids entertained indoors over the holiday break, when cold and slush can make it harder to spend time outside, Farrington says.

What it teaches: The principle of viscosity (thickness of a liquid). "It's a non-Newtonian liquid, which means it defies the basic properties of physics; it's both a liquid and a solid," says Campbell. He lets kids run across trays of oobleck, which "behaves like a liquid when you touch it slowly, but behaves like a solid whenever you touch or move it very fast," Campbell says. "The real physics is that 'oobleck' resists sheer forces — it doesn't like to be moved. If you try to punch it, it turns rock solid. But if you wait still for one second, it will pour through your fingers like the best slimy liquid you have ever seen."

Experiment: Fill a saucer with water. Add pepper, watch how it floats on the surface. Then, add one drop of dish soap, and watch the pepper run to all sides and the water spill over the edges.

What it teaches: How the soap disrupts the water's surface tension. "Most people think, 'Water is a liquid.' They don't think it's also sticky. Water molecules like to stick to one another and the shape creates surface tension."

A more psychedelic version: Add a few drops of food coloring to a saucer of milk. Dip a cotton swab in dishwashing liquid, then dip the swab in the center of the saucer and hold it steady. Watch as the soap turns the mixture into a kaleidoscope.

Instructions: Ask child to construct a model of his or her favorite skyscraper or building, using the materials. Campbell suggests that kids build pyramids, triangles, squares and cubes, starting with basic shapes before building vertically.

What it teaches: Engineering and physics, including principles such as elasticity, gravity, foundations, stability and angles.

"Kids can see how sturdy structures are at different scales," Hirschon says.

Experiment: Add 3 tablespoons of sugar to 8 ounces of water. Slowly stir in a circular pattern. Wait 10 seconds, then drop a single drop of food coloring in the center. The dye will form a tornado in the sugar solution, as the rotating force of the water pushes it to the bottom. It will not diffuse into the sugar solution on the sides. "It is awesome," Campbell says.

What it teaches: The principle of diffusion, or spreading out of liquids.

Activities like these help kids associate science with fun, Campbell says. "Schools traditionally teach science only as the knowledge we need children to learn. However, kids care about why the door made a noise when it closed, or why a bubble pops. Using kids' questions like these to introduce science is so much more effective."

Ingredients: A 2-foot by 2-foot square of plywood to TACK? take on the wall, plastic sheeting for the floor, various fruits.

Experiment: Smash the fruit, then check it out with a magnifying glass.

What it teaches: Principles of physics, such as forces, compression, elasticity, as well as "basic fruit science," including how fruit are made up of outer protective layers, or skin, that surround the inner layer, or flesh, and seeds."We rarely stop to explore the science involved, but if you imagine that a pineapple has to survive from a fairly high fall from a tree, it makes SENSE since why its outer layer can be so tough, versus that of a strawberry," Campbell says. "The experiment also helps young kids learn basic use of science tools like a magnifying glass and making observations, predictions and conclusions."Parents can ask, 'How would you protect it better?' which allows an opportunity to learn redesign," Campbell says. "At Kids Science Labs we teach kids how to design better skin using foam, cotton, and plastic eggs."

Instructions: Let kids see what happens when water is added to these sponges, sold at many supermarkets.

What it teaches: The principle of absorption. "Kids can watch the sponge change," Campbell says. "They see it and, at first, they don't know it's a sponge. They see it go from dry to moist. They can see there are little holes inside the sponge to hold the water.

"For simplicity, parents can explain to their kids that a diaper is a type of sponge, your shirt is a type of sponge, and compare the amount of absorption between a sponge, diaper, old shirt and everything in between. We ask our kids if paper towels have holes in them — they always say no — but the reality is that they do, and the holes allow water surface tension to keep it inside the paper towel. Same with toilet tissue. Funny, huh?"

Christmas and the science geek in your life

Crystal radio sets
Posted by Mercury at 10:27 AM