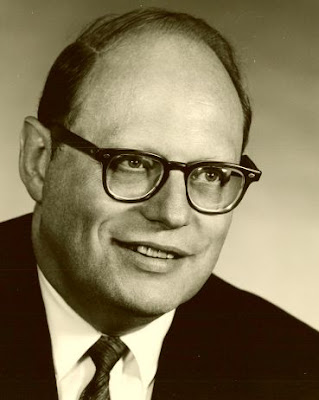 The New York Times
Jacob E. Goldman, a physicist who as Xerox’s chief scientist founded the company’s vaunted Palo Alto Research Center, which invented the modern personal computer, died on Tuesday in Westport, Conn. He was 90.

The cause was congestive heart failure, his son Melvin said.

Emblematic of a time when American corporations invested heavily in basic scientific research, Dr. Goldman played an important role both at the Ford Motor Company, during the 1950s, and later at Xerox in the 1960s and 1970s, in financing such endeavors in an effort to spark corporate innovation.

In the late 1960s, Xerox, then the dominant manufacturer of office copiers, was searching for ways to move into new markets when he proposed an open-ended research laboratory to explore what C. Peter McColough, chief executive at the time, called “the architecture of information.” Computer systems were still not available in offices at that time, and little was known about the shape of what would come to be called “the office of the future.”

Xerox had recently acquired Scientific Data Systems, a California computer maker, to compete with I.B.M. in the data-processing market. At the time, however, computers were largely centralized systems that were not interactive. The minicomputer market was just being pioneered by the Digital Equipment Corporation.

Xerox did not initially have a grand strategy for entering the computing business, only an inkling that the data processing world was both an opportunity and a potential threat.

“He was the one that made sure that Xerox understood there was a revolution coming behind them that might change their business,” said Michael Hiltzik, author of “Dealers of Lightning: Xerox PARC and the Dawn of the Computer Age.”

Dr. Goldman had originally been brought from Ford to Xerox by John Bardeen, who was on the Xerox board and was also a physicist. (He helped invent the transistor at Bell Labs.) Dr. Bardeen knew Dr. Goldman in part because of his contributions as a corporate science manager and also for running a well-known poker game every year at the American Physical Society meeting, according to his son.

The Xerox laboratory was almost stillborn in 1970 when many of the company’s directors resisted the idea of a West Coast center in an area in which the company did not have an active business. It was Dr. Bardeen who backed Dr. Goldman’s early vision and persuaded the company to support the venture even though it would not bear fruit any time soon.

“It was Jack who brought the idea back to management that they could not expect to get anything useful for at least five years, but maybe in 10,” Mr. Hiltzik said. “It was this idea that they did have to look far ahead and nurture research.”

Established in 1970 in an industrial park next to Stanford, PARC researchers designed a remarkable array of computer technologies, including the Alto personal computer, the Ethernet office network, laser printing and the graphical user interface.

The technologies would later be commercialized by both Apple Computer and Microsoft, among others, and Xerox would be criticized for not capitalizing enough on the technologies it had pioneered. Years later, Dr. Goldman explained Xerox’s failure to enter the personal computing market early on as part of a large corporation’s unwillingness to take risks.

“A big company will not make the investment to bring out a new product unless they see it makes a big difference,” he said in a 1988 interview in The New Haven Advocate. “Look at the personal computer industry today. It’s a multibillion-dollar industry today. And we at Xerox could have had that industry to ourselves.”

Dr. Goldman, who was often called Jack, was born in Brooklyn on July 18, 1921. His parents, Solomon Goldman, a jeweler, and the former Sarah Goldstein, had immigrated from Russia. Jacob attended Yeshiva University and received a master’s degree and his Ph.D. in physics from the University of Pennsylvania. With expertise in magnetism, he began his career at Westinghouse in 1945, before moving to teach at Carnegie Institute of Technology in Pittsburgh.

Dr. Goldman also excelled as a manager. At Ford, which he joined in 1955, he went on to head the company’s research and development laboratory.

Under Henry Ford II, he was one of the company’s first high-ranking Jewish executives, as the company broke with its founder’s anti-Semitism. A lifelong Democrat, he resisted a corporate memorandum early on demanding that executives make contributions to the Republican Party, his son said. After Dr. Goldman complained, the company changed its political contribution policy.

After retiring from the company he became a private investor and served on the boards of Xerox, General Instrument, the Burndy Corporation and other companies.

In, 1975, while still at Xerox, Dr. Goldman, as a director of United Brands, temporarily served on a committee that ran the company after the death of its chief executive, Eli M. Black, a high school classmate of Dr. Goldman’s.

Wired
Jacob “Jack” Goldman — the man who founded the lab that pretty much invented the personal computer as we know it — has died at age 90.

Goldman was the Xerox Chief Scientist who in 1969 proposed that the company create a pure research laboratory that would put Xerox in the same league as IBM and AT&T, whose Yorktown Heights and Bell Labs facilities are now legendary.

The result was Xerox Palo Alto Research Center (PARC) — the birthplace of the graphical user interface, Ethernet, the laser printer, and object-oriented programming.

Goldman hired physicist George Pake to run PARC, which set up shop in Palo Alto, California, in 1970. Working on the East Coast, Goldman championed the lab to Xerox corporate management, keeping it independent from the rest of the company and free to innovate.

“He really enabled the computer scientists who got brought together at PARC to follow their noses and develop the technology,” says Michael Hiltzik, a business columnist with the Los Angeles Times who is the author of Dealers of Lightning: Xerox PARC and the Dawn of the Computer Age. “He had a more general sense that computer science was going to be an important technology in the near future in 1970 and specifically was going to be a threat to Xerox if it didn’t get its arms around it.”

Goldman made PARC great, in part, by knowing when to recognize good ideas from others. He initially wanted to locate the lab near Yale University, but he let Pake talk him into nestling the lab next to Stanford. He also deferred to Pake on the name of the laboratory, saving history from remembering the great Xerox ASS (Advanced Scientific & Systems) Laboratory.

Xerox recruited Goldman from the Ford Motor Company in 1969, and one of his first jobs was to make sense of Xerox’s disastrous $918 million purchase of now-forgotten computer maker Scientific Data Systems.

The acquisition was a mistake. But it had an upside. It gave Goldman a justification for building PARC as a new R&D lab for the company’s computer division.

Xerox PARC is generally thought of as the place that invented much of the cool stuff that Microsoft and Apple made billions ripping off, but Hiltzik has a more charitable take on the PARC’s legacy. “It wasn’t really reasonable to expect that a corporation like Xerox could shift into this entirely new market and this entirely new technology on the scale that was required,” Hiltzik says. “Everything from its conventional R&D process to its sales process was built around the copier.”