An interview with Brian Cox and Jeff Forshaw on physics 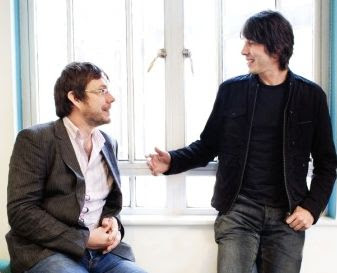 Brian Cox and Jeff Forshaw
“Science tells you that your opinion is worthless. That’s difficult”

You've co-authored a book called The Quantum Universe. Why should we value quantum physics research?

Brian Cox: Exploring the way that nature works is a good idea - given that we are part of it and living in it and manipulating it. Every big particle accelerator that's been built has discovered something other than the thing it was supposed to discover. That's the point of exploration: you don't know what you're going to find.

Jeff Forshaw: Solar panels, that's quantum physics. The laser is a direct exploitation of quantum physics: we wouldn't have discovered it if we didn't know quantum mechanics.

Is Britain punching above its weight in terms of scientific research?

What do you make of neutrinos apparently being measured moving faster than the speed of light - which would overturn Einstein?

BC: Science should be really honest - the experimenters don't believe the result, I don't think, because it does require a big revision of our understanding of physics. But they check it, they can't find anything wrong, so the correct thing to do is publish. You shouldn't sit on results just because they're surprising.

JF: There are loads of apparent discoveries in physics - we've found the Higgs Boson a dozen times already! There's nothing wrong with that. The false alarms get weeded out.

BC: You can think of areas where that's problematic: medical research, for example, where the behaviour of people depends on the research - I'm thinking of disasters like the MMR scare. But in general science should be really naive; there shouldn't be PR spin or politics.

JF: If people are interested in science, part of the journey they'll get to enjoy is seeing false alarms and how evidence mounts until we can make a very strong statement.

How much of a responsibility do you feel to be an advocate for science generally?

BC: A lot. I think the peer-review process is the best way we have of giving our best view on how nature works. There are no absolute truths in science. Take a so-called controversy such as climate change: the correct thing to say is that we make measurements of the climate, we look at the data, we model it and here are a range of predictions. While it's easy to point out the flaws, in general it's unarguable that science works. . . because we're not in fucking caves!

What motivates climate sceptics and the rest?

BC: Carl Sagan pointed out that "Science challenges". And the natural human response from people who are educated, who have a title or position, is to assume their opinion is worth something. And science tells you that your opinion is worthless when confronted with the evidence. That's a difficult thing to learn. When you look back at the Greeks or Romans and think, "Why didn't they get science?", maybe it was that.

JF: As a theoretical physicist, most of my time is spent doing calculations that are wrong. It's a humbling exercise, a massive dose of humility.

How can we teach that process?

BC: Quantum mechanics is interesting, because it's a theory that is absolutely shocking in its implications and yet not technically difficult. I think it should be taught in schools for that reason. Measurements of the world suggested something very odd - that particles can be in multiple places at once - so we developed a theory and it works. It's that process of saying: "Your preconceptions about reality are not right, because the evidence says so."

JF: Look through a window - how can you see through it? The answer is what a little kid might think: because there is virtually nothing there, it's an illusion of solidity. That's why the entire universe could fit into a pinhead, because it's empty.

JF: Put a number on it. People like me calculate what we expect to see, and people like Brian are involved in experiments.

Was there a plan for your career?

BC: No, other than I wanted to do physics.

JF: In the third year of my PhD I thought I wanted to become a schoolteacher.

Are we all doomed?

JF: The only thing that will save us is fundamental physics, because we have to escape to a distant part of the universe.

BC: On the human timescale, the adoption of the scientific method - making rational decisions based on evidence - that's the important thing. Look at public policy, health policy, economics: there's a reluctance to be humble.
Posted by Mercury at 4:55 PM