Plato and a Platypus Walk into a Bar...SAY WHAT?--book review 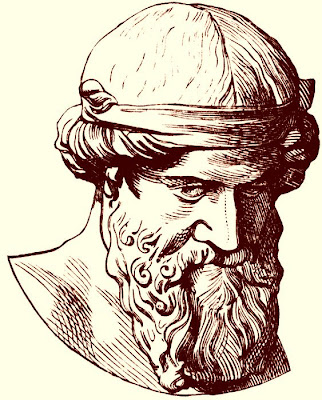 Here’s a lively, hilarious, not-so-reverent crash course through the great philosophical traditions, schools, concepts, and thinkers. It’s Philosophy 101 for everyone who knows not to take all this heavy stuff too seriously. Some of the Big Ideas are Existentialism (what do Hegel and Bette Midler have in common?), Philosophy of Language (how to express what it’s like being stranded on a desert island with Halle Berry), Feminist Philosophy (why, in the end, a man is always a man), and much more. Finally—it all makes sense!

An Irishman walks into a Dublin bar, orders three pints of Guinness, and drinks them down, taking a sip from one, then a sip from the next, until they’re gone. He then orders three more. The bartender says, “You know, they’d be less likely to go flat if you bought them one at a time.”

The man says, “Yeah, I know, but I have two brothers, one in the States, one in Australia. When we all went our separate ways, we promised each other that we’d all drink this way in memory of the days when we drank together. Each of these is for one of my brothers and the third is for me.”

The bartender is touched, and says, “What a great custom!”

The Irishman becomes a regular in the bar and always orders the same way. One day he comes in and orders two pints. The other regulars notice, and a silence falls over the bar. When he comes to the bar for a second round, the bartender says, “Please accept my condolences, pal.”

The Irishman says, “Oh, no, everyone’s fine. I just joined the Mormon Church and I had to quit drinking.”

An old cowboy walks into a bar and orders a drink. As he sits there sipping his whiskey, a young lady sits down next to him. She turns to the cowboy and asks him, “Are you a real cowboy?”

He replies, “Well, I’ve spent my whole life on the ranch, herding horses, mending fences and branding cattle, so I guess I am.”

She says, “I’m a lesbian. I spend my whole day thinking about women. As soon as I get up in the morning, I think about women. When I shower or watch TV, everything seems to make me think of women.”

A little while later, a couple sits down next to the old cowboy and asks him, “Are you a real cowboy?”

He replies, “I always thought I was, but I just found out I’m a lesbian.” 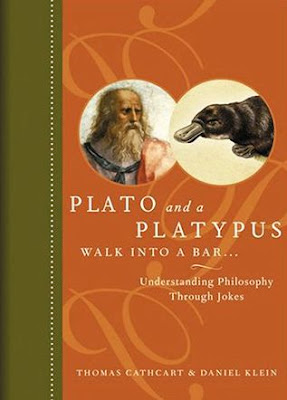 Plato and a Platypus Walk into a Bar: Understanding Philosophy Through Jokes

ISBN-10: 081091493X
ISBN-13: 978-0810914933
Tom Cathcart and Daniel Klein pursued the usual careers after majoring in philosophy at Harvard. Tom worked with street gangs in Chicago, doctors at Blue Cross and Blue Shield, and dropped in and out of various divinity schools. He lives with his wife on Cape Cod. Dan has written jokes for various comedians including Flip Wilson and Lily Tomlin. He lives with his wife in the Berkshires. Together, they are authors of the politically incorrect book of daily affirmations, Macho Meditations.
Posted by Mercury at 4:28 PM

Email ThisBlogThis!Share to TwitterShare to FacebookShare to Pinterest
Labels: "Plato and a Platypus Walk into a Bar: Understanding Philosophy Through Jokes", Daniel Klein, Thomas Cathcart