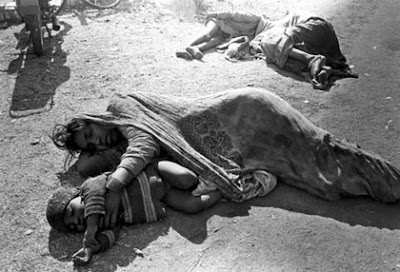 It is relevant to remember the tragedies of the past.

"A Cloud Still Hangs Over Bhopal"

The New York Times
IN the Mumbai kindergarten my son went to, the children never had to clean up after themselves; that was the servants’ job. So I really liked the school my son attended when we moved back to Brooklyn, where the teachers made the children tidy up at the end of the day. “Cleanup time, cleanup time!” my 6-year-old sang, joyfully gathering his scraps. It’s a wonderful American tradition: you always clean up the mess you made.

This is the 25th anniversary of the Bhopal gas disaster, an epic mess that started one night when a pesticide plant owned by the American chemical giant Union Carbide leaked a cloud of poisonous gas. Before the sun rose, almost 4,000 human beings capable of love and anguish sank to their knees and did not get up. Half a million more fell ill, many with severely damaged lungs and eyes.

An additional 15,000 people have since died from the aftereffects, and 10 to 30 people are said to die every month from exposure to the hundreds of tons of toxic waste left over in the former factory. But amazingly, the site still has not been cleaned up, because Dow Chemical, which since acquired Union Carbide, refuses to accept any responsibility. The groundwater is contaminated; children of the survivors suffer from genetic abnormalities; and the victims have long since run out of their measly compensation and are begging on the streets.

I have traveled to Bhopal and seen the post-apocalyptic devastation, seen the sick, seen the factory. Methyl isocyanate is a deadly chemical used to kill insects. The night that 40 tons of it wafted out of the factory is, for the survivors, a fulcrum in time, marking the before and after in their lives. They still talk about “the gas” as if it were an organism they know well — how it killed buffalo and pigs, but spared chickens; how it traveled toward Jahangirabad and Hamidia Road, while ignoring other parts of the city; how it clung to the wet earth in some places but hovered at waist level in others; how it blackened all the leaves of a peepul tree; how they could watch it move down the other side of the road, like a rain cloud seen from a sunny spot.

All over India, when misfortune strikes — when a child is ill, for example — people burn chilies to drive away the evil eye. The gas smelled like chilies burning, and people said to one another, it must be a powerfully evil eye that’s being driven away, the stench is so strong.

Fleeing the gas, the Bhopalis clutched their children. Some babies fell, gasping, and their parents had to choose which ones to carry on their shoulders. One image still comes up over and over in their dreams: in the stampede, a thousand people are stepping on their child’s body.

In 2001, the maker of napalm married the bane of Bhopal: Dow Chemical bought Union Carbide for $11.6 billion and promptly distanced itself from the disaster. If Union Carbide was at fault, that was too bad; it had just ceased to exist. In 2002, Dow set aside $2.2 billion to cover potential liabilities arising from Union Carbide’s American asbestos production. By comparison, the total settlement for Bhopal was $470 million. The families of the dead got an average of $2,200; the wounded got $550; a Dow spokeswoman explained, that amount “is plenty good for an Indian.” As Representative Frank Pallone of New Jersey observed in 2006, “In Bhopal, some of the world’s poorest people are being mistreated by one of the world’s richest corporations.”

Union Carbide and Dow were allowed to get away with it because of the international legal structures that protect multinationals from liability. Union Carbide sold its Indian subsidiary and pulled out of India. Warren Anderson, the Union Carbide chief executive at the time of the gas leak, lives in luxurious exile in the Hamptons, even though there’s an international arrest warrant out for him for culpable homicide. The Indian government has yet to pursue an extradition request. Imagine if an Indian chief executive had jumped bail for causing an industrial disaster that killed tens of thousands of Americans. What are the chances he’d be sunning himself in Goa?

The Indian government, fearful of scaring away foreign investors, has not pushed the issue with American authorities. Dow has used a kind of blackmail with the Indians; a 2006 letter from Andrew Liveris, the chief executive, to India’s ambassador to the United States asked for guarantees that Dow would not be held liable for the cleanup, and thanked him for his “efforts to ensure that we have the appropriate investment climate.”

What’s missing in the whole sad story is any sense of a human connection between the faceless people who run the corporation and the victims. In 1995, a Bhopali woman named Sajida Bano sent a handwritten letter to Union Carbide. The factory had killed her husband in 1981 in an accident, and then, on the night of the disaster, her 4-year-old son. “You put your hand on your heart and think,” she wrote, “if you are a human being: if this happened to you, how would your wife and children feel?” She never received a response.

The survivors of Bhopal want only to be treated as human beings — not victims, not greedy money-grabbers, just human beings who’ve gone through hell and are entitled to a measure of dignity. That includes concrete things like cleaning up the mess and providing health care for the sick, and also something more abstract but equally important — an acknowledgment that a wrong was done to them, and an apology, which Bhopalis have yet to receive.

That was another fine thing my son learned in the Brooklyn school: when you’ve done something bad, you should say you’re sorry. After a quarter of a century, Dow should acknowledge that it is responsible for a very big mess. And now, it’s cleanup time.

Suketu Mehta, a journalism professor at New York University, is the author of “Maximum City: Bombay Lost and Found.”