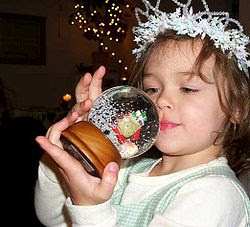 Yes, there is some science involved in snowglobes...but who cares, they are cool Christmas symbols.

"The chemistry of snow globes and other holiday gifts"

Americal Chemical Society
What makes the snowflakes flutter down almost hypnotically when you shake a snow globe? People have been mesmerized by these transparent spheres enclosing a miniaturized scene since the first snow globe appeared in France almost 200 years ago.

A new video in the American Chemical Society (ACS) Chemistry of Holidays series answers that question in brilliant high-definition detail. The video, released today, showcases an actual general chemistry, or chemistry for nonscience majors, laboratory session at the Catholic University of America (CUA) devoted to the chemistry of the December/January holidays. It is available at...

The video features Diane Bunce, Ph.D., and her students, who perform experiments with a holiday theme. Bunce, professor of chemistry at CUA, is a recipient of the ACS Helen Free Award for Public Outreach and associate editor for Chemical Education research for ACS’ Journal of Chemical Education. The video, produced by the ACS Office of Public Affairs, shows students using the principles of chemistry to make:

* A colorful, bouncing super ball made with polymers.
* A snow globe-like stick, consisting of a test tube filled with water, glitter and glycerine. The glycerine slows the glitter and makes it look like snowflakes falling when the tube is shaken.
* A marbleized gift card made with shaving cream, paper and various food colorings.

Bunce explained that the experiments were used to demonstrate key chemistry concepts, such as polymerization cross-linking (the process in which polymer molecules link together) and viscosity and density (which keep snowflakes aflutter inside snow globes).

“We hope that students will actually hang these items on their trees at home and use them to explain the wonders of chemistry to their families and friends,” Bunce said.

A teachers’ guide with detailed instructions for each experiment is available in PDF format.

Another video in the ACS series, focusing on the Chemistry of Thanksgiving, also can be found at...

great chem lab....I used the link on my RosFrankie Blog for kids and gave POS credit...hope you don't mind. I'm still figuring out the 'links' button. I like the Tom & Jerry 'toon also, but was reluctant to post it due to today's educational standards...[educational standards!!! another subject altogether] but I am sharing it with all my adult drinking friends...who all remember watching it as kids...
Thanks- and happy holiday!
J. D.