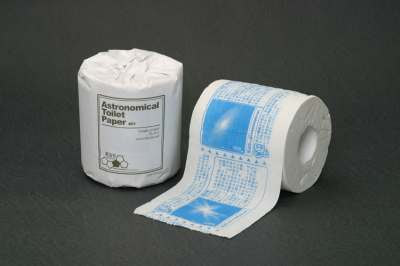 "Wiping with the stars"

Symmetry
Every so often, particle physics communicators from labs around the world gather to swap strategies for getting people interested in science. At the group’s April meeting in Japan, the big hit was toilet paper.

Since 2004, more than 40,000 rolls of toilet paper with flushable facts about the life cycles of stars have found their way into Japanese society. References to Astronomical Toilet Paper litter blogs, and Web photos show the toilet paper visiting historical sites, much like the gnome in Travelocity commercials.

“People nowadays are too busy to think about the universe,” says Naohiro Takanashi, a research fellow at the National Astronomical Observatory of Japan. “We hope busy people use their time in the closed rest room to think about it.”

Tsuyuki Shikou, a company known for manufacturing toilet paper adorned with animals, flowers and vegetables, printed this version for the TENPLA Project, which is dedicated to popularizing astronomy. It follows in a whimsical Japanese tradition of inscribing toilet paper with comic strips, crossword puzzles, novels, and pop culture icons.

“We hope people learn that stars have a life. They are born from a molecular cloud, they become adult and finally they die; it’s similar to our lives,” Takanashi says. “We want people to see the similarity and feel connected to the stars and have an interest in astronomy.”

You can even do a bit of astronomy with the cardboard tube at the center of the roll: Take it outside, look at the sky through the cardboard tube, count the stars in the circle and use a formula to calculate the brightness of the night sky.

That is, if you can bring yourself to use all the paper.

Fusae Miyazoe, spokeswoman for the Institute for the Physics and Mathematics of the Universe at the University of Tokyo, says many of her colleagues tell her it’s a waste to read the roll only once, “so they just leave it on the shelf in the bathroom.”

If the idea catches on, maybe we’ll see toilet paper showing, step by step, how particles zip through a detector. Hmm. What will particle physicists do with the cardboard tube?
Posted by Mercury at 6:21 AM

Great Analogy. I am a college sophomore with a dual major in Physics and Mathematics @ University of California, Santa Barbara. By the way, i came across these excellent physics flash cards. Its also a great initiative by the FunnelBrain team. Amazing!!