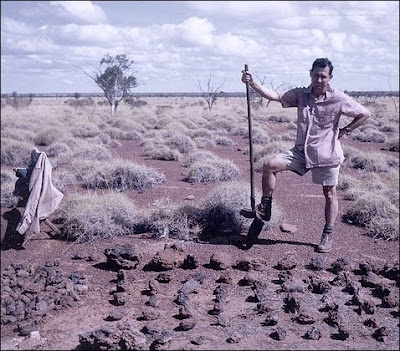 The Smithsonian geochemist was the first to discover that a rock found in Antarctica came from the moon. He wrote one of his field's fundamental books, 'Principles of Geochemistry.'

latimes.com
Brian H. Mason, a Smithsonian scientist internationally known for his study of meteorites and moon rocks and who was the first to discover that a rock found in Antarctica came from the moon, has died. He was 92.

Mason died of renal failure Dec. 3 at his home in Chevy Chase, Md.

"Brian Mason was probably the best known and most revered geochemist of his generation," said Sorena S. Sorensen, chairwoman of the Department of Mineral Sciences at the Smithsonian's National Museum of Natural History. "He could look at a rock and know something important about it. He could pick it up and elicit its story."

Mason wrote one of his field's fundamental books, "Principles of Geochemistry," in 1952. It was still being used in classrooms 30 years later.

In 1962, he wrote what became a standard text on meteorites, and in 1970 he co-wrote a lengthy report on the lunar rocks collected by the Apollo astronauts.

While examining meteorites collected by U.S. expeditions to Antarctica, he wrote in his notes that they seemed to be rocks from the moon, a prospect that astrophysicists had said was impossible. Unwilling to show up other scholars, he wrote that they "had a passing resemblance to certain Apollo 15 lunar rocks." Within a year, other scientists agreed.

It wasn't the first or last time his work forced a reconsideration of an entire field.

Mason led the collecting of meteor fragments that fell near the Mexican village of Pueblito de Allende in 1969. The meteorites contained grains of the oldest material in the solar system and bits of material from a cloud of gas and dust that predated the solar system.

"He did the research, and he disseminated the research, and that guided generations of geoscientists in significant numbers across all these fields," said Timothy McCoy, a geologist and curator in charge of the Museum of Natural History's meteorite collection.

In recognition of his accomplishments, an asteroid appearing between Mars and Jupiter was named 12926Brianmason.

Two minerals, Brianite and Stenhuggarite (from the Swedish stenhuggar, for "mason"), also carry his name.

Brian Harold Mason was born in 1917 in Port Chalmers, New Zealand, and grew up in Christchurch. In 1936, he graduated from New Zealand's University of Canterbury, from which he later received master's degrees in chemistry and geology.

A postgraduate fellowship took him to Europe in 1939. In Norway, he became the last graduate student of Victor Goldschmidt, the father of modern geochemistry. The arrival of the Nazis forced them to escape to Sweden.

Mason received a doctorate in geochemistry from the University of Stockholm in 1943.

He taught in New Zealand and by 1953 was at the American Museum of Natural History in New York, where his first task was to reorganize its large meteorite collection.

His interest in extraterrestrial matters was so great that while watching Apollo 11 astronaut Neil Armstrong on the lunar surface, he groused that Armstrong "was talking to President Nixon when he would have been better occupied picking up rocks."

He was twice divorced. His third wife, Margarita Babb Mason, died in February after 15 years of marriage. Survivors include a stepson, Frank Turner.
Posted by Mercury at 8:25 AM