Shakhashiri and a 40 year chemistry tradition 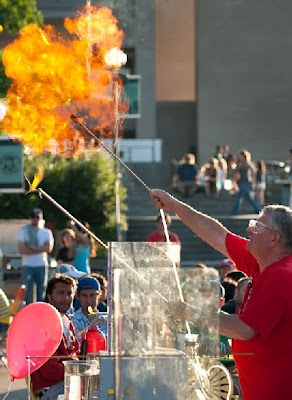 Ask yourself this: Are the people there for the chemistry of chemistry or just a good show? I suppose it doesn't make any difference. The fact remains that this is a cool tradition...a focused Mr. Wizard.

It would seem to hold all the appeal of listening to someone read the dictionary aloud.

But hundreds of people will pack into a room on the UW-Madison campus Saturday to attend a presentation on the properties of carbon dioxide, liquid nitrogen and zirconium.

In short, the choice activity in Madison on Saturday is a chemistry lecture.

If it sounds like a snooze, then you don't know Bassam Shakhashiri.

This is the 40th time the UW-Madison professor has held his annual Christmas show extravaganza, otherwise known as "Once upon a Christmas cheery, in the lab of Shakhashiri."

With a flair for showmanship, Shakhashiri is like a magician who wows audiences by using science, rather than sleight of hand or illusions. Beakers erupt with material, solutions turn psychedelic colors, chemicals explode thunderously - all to an audience oohing and ahhing as if they were watching Harry Houdini.

His show has become so popular that tickets run out weeks in advance, hundreds are turned away, and public television stations across the country replay it.

But it started humbly, as a demonstration just for students in his chemistry course.

Shakhashiri held his inaugural Christmas lecture in 1970, his first year as an assistant professor at UW-Madison. He based it on the 19th century Christmas lectures held for children by Michael Faraday, an English physicist and chemist.

Then, it had a working title: the Edgar Allan Poe-inspired, "Once Upon a Midnight Dreary, in the Lab of Shakhashiri." But that just wouldn't do.

"I said, ‘Hey, there's nothing dreary in my lab, it's all cheery,'" Shakhashiri said. "So we changed it right away."

Word got out that it was a must-see event. Students who weren't in his class began showing up, then community members, overflowing the 350 creaky wooden chairs in the chemistry lecture hall.

He began to hold the lecture at night, expanding it to two shows. This weekend, there will be four shows for more than 1,000 people.

Shakhashiri, who wears a trademark "Science is Fun" T-shirt at the demonstrations, has a goal of inserting whimsy into a discipline that can sometimes seem dry.

"It is my attempt to share with the audience the magnificent joy of doing science," he said.

Shakhashiri, born in Lebanon, calls teaching a noble endeavor. He has taught 25,000 students over the years and his introductory chemistry course fills quickly during registration week.

During the mid-1980s, he took a leave from the university to be assistant director for Science and Engineering Education at the National Science Foundation.

Even in Washington D.C., he continued the Christmas lecture, once with Vice President Dan Quayle in the audience.

Through the Christmas lectures, and other science shows throughout the year, he hopes to inspire young minds.

"He stimulates you to be curious," said Rodney Schreiner, a senior scientist at UW-Madison who has participated in all but the first lecture. "And he has a knack for giving you just enough information to spike your curiosity but not enough so you're satisfied, so you have to go out and do a little on your own."

At 70 years old, Shakhashiri said he will continue the Christmas show as long as the university will let him.

In addition to appearances from Bucky Badger (who always wears safety goggles), Santa, and others, the special guest star at this chemistry display is the element zirconium.

It possesses the atomic number 40.

Science is Fun in the Lab of Shakhashiri
Posted by Mercury at 6:26 AM