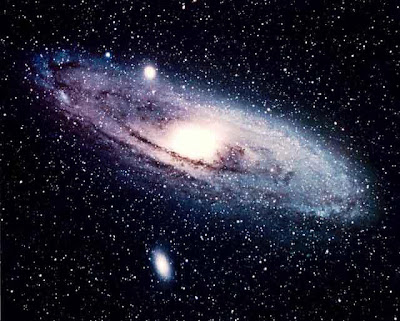 "The Known Universe Scientifically Rendered For All to See"
After hovering over Mount Everest and the gorges that plunge to the Ganges, you are pulled through the Earth’s atmosphere to glimpse the inky black of space over Tibet’s high desert. So begins The Known Universe, a new film produced by the American Museum of Natural History that is part of a new exhibition, Visions of the Cosmos: From the Milky Ocean to an Evolving Universe, at the Rubin Museum of Art in New York City.

The magic of this film, though, happens as the inky black expands. Pulling farther and farther from Earth, you see the deep blue of the Pacific give way to night as the Sun comes into focus, the orbits of the solar system shrink smaller and smaller, the constellations Sagittarius and Scorpio stretch and distort, and, as the Milky Way receeds, the spidery structure of millions of other galaxies come into view. Then, you reach the limit of the observable universe, the afterglow of the Big Bang. This light has taken more than 13.7 billion years to reach our planet, and you return, back to Earth, to two lakes that are nestled between Mount Kailash and Mount Gurla Mandhata in the Himalayas.

The structure of The Known Universe is based on precise, scientifically-accurate observations and research. The Hayden Planetarium at the American Museum of Natural History maintains the Digital Universe Atlas, the world’s most complete four-dimensional map of the universe. The Digital Universe started nearly a decade ago. It is continually updated and is the primary resource for production of the Museum’s Space Shows such as the current Journey to the Stars, and is used in live, real-time renderings for Virtual Tours of the Universe, a public program held on the first Tuesday of every month. Last year, some 30,000 people downloaded the Digital Universe to their personal computers, and the Digital Universe will soon be updated with a more accurate and user-friendly software interface. Digital Universe is licensed to many other planetariums and theaters world-wide.

“I liken the Digital Universe to the invention of the globe,” says Curator Ben R. Oppenheimer, an astrophysicist at the Museum. “When Mercator invented the globe, everyone wanted one. He had back orders for years. It gave everyone a new perspective on where they live in relation to others, and we hope that the Digital Universe does the same on a grander, cosmic scale.”

The new film was produced by Michael Hoffman, and directed by Carter Emmart. Brian Abbot manages and Ben R. Oppenheimer curates the Digital Universe Atlas. The exhibition at the Rubin, Visions of the Cosmos: From the Milky Ocean to an Evolving Universe, opened on December 11 and continues through May 10.

Some amazing and beautiful scenes of terrestrial Earth
Posted by Mercury at 8:41 AM