When ISS is completed...then what? 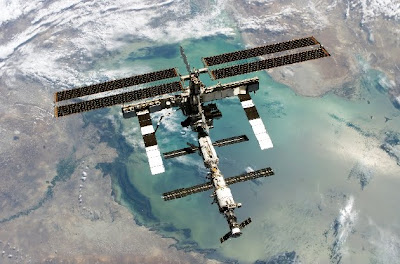 A waste of money.

"After space station is built, what will ISS crew do up there?"

For years to come, the International Space Station will be the site for experiments benefiting earth research and extended space flight.

The Christian Science Monitor
The US shuttle Atlantis undocked from the International Space Station Wednesday, beginning the homeward stretch of an 11-day mission that delivered spare parts to the orbiting outpost.

Now that NASA has begun putting the finishing touches to the International Space Station, it and partner agencies have been posting the equivalent of slick travel brochures complete with a photo montage of astronauts serving as lab technicians or wired up as test subjects.

It's one part of preparations for expanding the use of a space station that could remain on orbit through 2020 or even 2028.

NASA is doing studies to see if the certified lifetime of the station's structural pieces can safely be extended. Con­gress last year asked the agency to find ways to keep the station operating past 2015.

"We're doing a 30-year look at all the components," says space-station program manager Michael Sufferedini. "Assuming we get them all certified, we'll actually have a vehicle certified through about 2028."

Much of the research NASA and other space agencies are interested in involves long-term human space exploration beyond low-Earth orbit.

Scientists already are working on two key problems: the potential radiation hazard astronauts would face once they leave the protection of Earth's magnetic field, and the physiological changes astronauts face as they spend months in weightlessness.

Cosmic rays are not rays per se, but a constant stream of high-energy particles, largely protons. They arrive from deep space, and they pack enough punch to trigger a cascade of other particles when they strike the atmosphere – or a spacecraft. They're energetic enough to damage DNA, a long molecule that contains the biochemical blueprint for an organism's form and function.

One of the major physiological effects scientists are trying to counter is a loss of bone and muscle mass astronauts experience after long periods of weightlessness. Resistance exercises during orbit help. But to get a better handle on the issue, scientists are using rodents to study the genetics behind astronauts' bone loss, as well as to get a better handle on bone-related diseases.

Many experiments are expected to continue to focus on biomedical questions, as well as materials science experiments.

Weightlessness offers some unique advantages over ground-based experiments. Grow cells in a petri dish, for instance, and gravity flattens them into essentially two-dimensional organisms. Grown in space, they become tiny spheres, making it easier to track the mechanisms behind their development.
Posted by Mercury at 4:52 PM