Remember when Bob Guccione provided this... 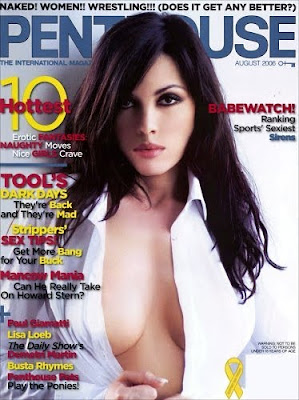 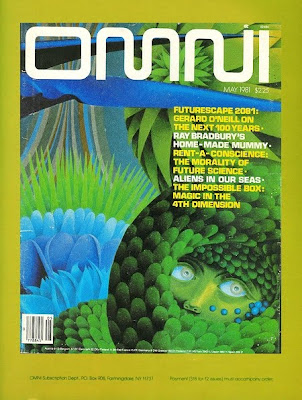 I never cared for either one...Penthouse was an obvious cheesy imitation of the sophisticated Playboy and Omni verged on science fiction.

Slate
Is a robot shoveling your snow?

I once knew the answer to this question. For anyone who was raised in the '70s and never had a date in the '80s or who thought the 2000s would look like a cross between a Yes album cover and Journey concert T-shirt, Omni magazine was essential reading—one with a ready answer to all your robot and rocket questions. And to a 10-year old getting a subscription for Christmas in 1979, Omni was The Future.

The magazine was a lushly airbrushed, sans-serif, and silver-paged vision dreamed up by Penthouse publisher Bob Guccione and his wife, Kathy Keeton. It split the difference between the consumerist Popular Science—which always seemed to cover hypersonic travel and AMC carburetors in the same page—and the lofty Scientific American, whose rigor was alluring but still impenetrable to me. But with equal parts sci-fi, feature reporting, and meaty interviews with Freeman Dyson and Edward O. Wilson, Omni's arrival every month was a sort of peak nerd experience.

"Omni was different," the erstwhile Penthouse publisher mused in his first editorial for the magazine. "It was a creation of pure joy."

Guccione had plenty to joyful about: commercially, Omni really did look like the future. Its October 1978 debut had what was then the largest number of ad pages for any newly launched magazine in history. By the following month, the New York Times and the Economist both had their own Science sections. And when Guccione watched his circulation quickly soar to around 850,000—most in the coveted 18-34 demographic—his magazine looked as if it was here to stay.

But the only place you'll find Omni for sale today is in a junk shop or on eBay. To look over old issues of Omni is to experience equal parts amazement (a science mag by Penthouse's founder interviews Richard Feynman?) and amusement (by 2010, robots will—yes!—"clean the rug, iron the clothes, and shovel the snow.") It was in a 1981 Omni piece that William Gibson coined the word "cyberspace," while the provoking lede "For this I spent two thousand dollars? To kill imaginary Martians?" exhorted Omni-readers to go online in 1983—where, they predicted, everything from entire libraries to consumer product reviews would soon migrate. A year later, the magazine ran one of the earliest accounts of telecommuting with Doug Garr's "Home Is Where the Work Is," which might have also marked the first appearance of this deathless standby of modern reportage: "I went to work in my pajamas."

Then again, that same issue predicted the first moon colony in 2010; supplied with "water in the shadowed craters of the moon's north pole" (not a bad guess), it might be attacked by "space-based Soviet particle-beam weapons."

Amid these features, a fine "games" column, and lush art essays like the "7 Wonders of the Universe"—which included an orbiting Yonkers Airport—the silver-paged Continuum section ran peppy science items not unlike today's In Brief section of New Scientist. (In fact, the two magazines shared some DNA via editor Bernard Dixon.) Not only did Omni sci-fi contributors include a veritable hall of fame—Bradbury, Asimov, Dick, Heinlein, Clarke, Gibson, Sterling—the magazine also featured women writers and editors to a degree that still puts most magazines to shame. Ursula K. LeGuin and Dava Sobel were early contributors, as was Joyce Carol Oates.

That mix of sci-fi and science reporting was telling. Omni's science coverage was built on a sturdy tripod of space exploration, medicine, and computing, but always with a certain fondness for speculative woo-woo. Editor Robert Weil has recalled Guccione's fascination with "stuff on parapsychology and U.F.O.'s," which accounts for the items on alien interference in the Yom Kippur War, a haunted pizza factory, and psychics using tarot cards "to energize their pineal glands." These lived in the fire alarm-red "Antimatter" section, though these Antimatter particles increasingly mingled with the Matter in the rest of the magazine. For a surprisingly long time, this mixture of Matter and Antimatter didn't quite blow up.

There was even a short-lived Omni TV series—still viewable on YouTube with an affably boozy-looking Peter Ustinov hosting—and an Omni Future Almanac published in 1982. The almanac is a retro delight: Its soothsaying ranged from global warming and a wireless "data terminal inside the home, [where] one could have access to all the volumes within the Library of Congress and the New York Public Library" (Google Books!) to predictions of a France-to-Libya water pipeline and 100 mpg averages for cars. "By 2000," it solemnly predicted, "Sweden will have a largely automated robot society." Also, by now we should be having a space crime wave.

It's hard to say when Omni lost its momentum: Perhaps it was when the future itself changed and shuttle missions started looking like an expensive way of going nowhere. Perhaps it was Time Inc.'s launch of Discover or the time when two Omni editors—and then Guccione's own daughter—publicly resigned in 1990 in protest over ads on the magazine's cover. The ads, ironically, were probably the newest thing about Omni's look: It hadn't been updated in two decades, and the far-out future once promised to ELO listeners appeared desperately unhip in a never mind era.

Other magazines ate their lunch: Subscribers to the newly launched Wired looked suspiciously like Omni readers who'd moved on and gotten MBAs. By 1995, Omni's thinning page count was stuffed with more marginal stories, and—in the most gloriously desperate move I've ever seen in a collapsing magazine—it ran ads for "a breakthrough in interactive publishing": a 900 line that provided "a direct link to our editorial staff."

The print edition folded a year later, though Guccione and Keeton spun this into a startling achievement: Omni became the first major newsstand title to go online-only. Omnimag.com lacked the gloss and heft of old, but the Continuum items read much the same as before, and it continued a strong suit in interviews by expanding them into interactive forums with Omni readers.

And, of course, there were UFOs—lots of UFOs.

Woo-woo science is always fun until someone gets hurt; and, alas, that someone may have been publisher Kathy Keeton. Omni was her baby, and even as it pumped out more Antimatter coverage, Keeton battled the earthly ailment of breast cancer with largely discredited hydrazine-sulfate therapy. Wide-eyed futurism may not have lent itself to judging cancer treatments. Within days of Keeton's death in September 1997, Omni's site fell silent, save for a link directing readers to a Hydrazine Sulfate advocacy site. These days the (now NSFW) Omnimag.com domain redirects readers to ... Penthouse.

And yet old copies of Omni can still stop grown nerds in their tracks: "Oh god, I remember this!" Curiously, so does the Guccione family—son Bob Jr. occasionally speaks of reviving the magazine. If he ever does, I'll look forward to watching my sons reading it. Though some kinds of future, I fear, can only be found in the past.

Click here to view a slide show on Omni magazine.

[Paul Collins teaches in the MFA writing program at Portland State University. His latest book is The Book of William: How Shakespeare's First Folio Conquered the World.]
Posted by Mercury at 5:04 AM

i used to read Omni, once actually bought one in an airport to read on a plane. right now i have a gift subscription to Discover magazine. i never read it....