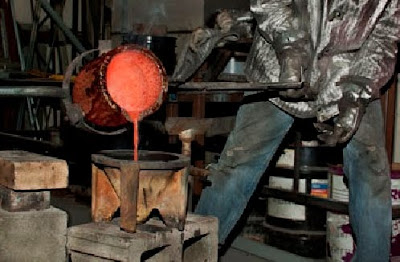 The elements at the bottom of the periodic table are rare and could well be monopolized by China. Maybe it might be time to adjust your investment portfolio.

Prospect
China’s monopoly on rare earth metals could choke economies across the world.

Cast your eyes down to the lower reaches of the periodic table, and you find a row of exotic-sounding elements that you probably never got to in chemistry lessons. Here lie 17 elements known as rare earth metals, a group consisting of lanthanides (atomic numbers 57-71), scandium (21) and yttrium (39)—the latter owing its name to the similarly unpronounceable Swedish town where it was discovered in the late 18th century. Yet rare elements are not quite as unusual as their names might suggest. In fact, they are everywhere: in your mobile phone, hard disk drive, iPod headphones, plasma television, and hundreds of other electronic and industrial products. And now their supply is under threat.

Global demand for these metals has more than doubled over the past decade, as ever more devices make use of their unique properties. Rare earth phosphors in your television screen make the colours bright, while super-strong rare earth magnets allow electric motors to be compact enough to fit in a car, and headphones small enough to fit in your ear. Japan manufactures many of these goods and is the world’s biggest importer of the metals. The car giant Toyota aims to sell around 1m hybrid cars a year from 2010—a huge jump if you consider that it has sold 2m hybrids in total since 1997. With several kilograms of rare earth metals in each hybrid car, Toyota, Honda and other car-makers will have to stock up to avoid bottlenecks.

The problem is that there is only one seller: China, with 95 per cent of the world’s supply. Not only does China dominate the production of rare earths, it also leads the field in extraction. That means, for example, that when Japan buys rare earth minerals from countries other than China, it still has to pay Chinese factories to extract the pure metal. All of this wouldn’t be an issue if China was keen to sell. But, increasingly, it isn’t. Beijing has cut export quotas steadily, from 48,500 tonnes in 2004 to 31,310 tonnes in 2009. And in August, China proposed capping rare earth exports at 35,000 tonnes for each of the next six years; barely enough to satisfy the current Japanese market, let alone the world. Even worse for companies like Toyota, China is planning to entirely phase out some forms of dysprosium, a vital component in the magnets of electric car motors. Without dysprosium, the magnets won’t work at high temperatures, meaning in theory that your hybrid car could stop dead as you hit the motorway. Prices of the metals were rising fast before the global recession—a kilo of dysprosium hit $120 in 2007, up from $35 in 2004—and have started their rapid climb again following China’s announcement.

So what is going on? China certainly isn’t running out; it has the metals in abundance. Rather, as Shigeo Nakamura, head of the trading company Advanced Metals Japan, told me, China has a new strategy to boost its own high-tech manufacturing sector. Chinese companies stand to make handy profits by making and selling components that use the metals (like electric car motors), instead of simply selling the raw material. Such moves have already brought a chorus of corporate complaints, and the recently elected Japanese government even made securing rare metal supply a manifesto pledge. China’s response so far has been to claim that because it has such large reserves it must restrict exports, or the market would flood and global prices would fall. Unconvinced, the US and EU have already asked the WTO to investigate.

This economic gamesmanship is forcing developed countries to mimic China’s own aggressive courtship of mineral-rich African regimes: Jogmec, a Japanese body charged with securing stable resources for Japan’s industry, has already struck deals with several African countries, most recently Botswana, to develop new mines. Western companies, meanwhile, are looking anew at old assets. In California, the mining company Molycorp has reopened its Mountain Pass mine, one of the world’s richest until Chinese competition put it out of business in 2002. Yet even these efforts are unlikely to head off a bout of national panic buying. Japan has an emergency stockpile of rare metals used in steel products, and plans to increase its stock of others. But such measures won’t relieve pressure on manufacturers outside China if the cost of rare earths continues to rise; they may be faced with a stark choice of hiking up their own prices, or relocating to the People’s Republic. Senior government advisors in Britain draw a blank when asked about this scenario. Britain may not have a manufacturing sector the size of Japan’s, but the consequences of a trade monopoly in rare earths would still be disastrous.

There is no viable rare earth substitute. Other metals have been tested, but they don’t work. Scientists have had some success in reducing the amount of rare earths needed in products, but not enough. Efforts being made to reuse and recycle the many tonnes of rare earth metals currently thrown away (in discarded mobile phones, hard drives, and so on) are unlikely to make a difference on their own. Even if any of these initiatives do eventually succeed, new mines still take years to build, and new scientific techniques take just as long to be adapted for commercial use. China’s former leader Deng Xiaoping once noted that “while the middle east has its oil, China has rare earths.” His words may be even more prescient than he realised.
Posted by Mercury at 3:55 PM