Is the chase more pleasurable than the capture? 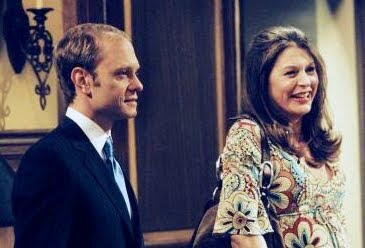 Maybe the action of pursuit is more pleasurable than the capture...consider Niles and Daphane.

"The Joy of Physics Isn’t in the Results, but in the Search Itself"

The New York Times
I was asked recently what the Large Hadron Collider, the giant particle accelerator outside Geneva, is good for. After $10 billion and 15 years, the machine is ready to begin operations early next year, banging together protons in an effort to recreate the conditions of the Big Bang. Sure, there are new particles and abstract symmetries in the offing for those few who speak the language of quantum field theory. But what about the rest of us?

The classic answer was allegedly given long ago by Michael Faraday, who, when asked what good was electricity, told a government minister that he didn’t know but that “one day you will tax it.”

Not being fast enough on my feet, I rattled off the usual suspects. Among the spinoffs from particle physics, besides a robust academic research community, are the Web, which was invented as a tool for physicists to better communicate at CERN — the European Organization for Nuclear Research, builders of the new collider — and many modern medical imaging methods like M.R.I.’s and PET scans.

These tests sound innocuous and even miraculous: noninvasive and mostly painless explorations of personal inner space, but their use does involve an encounter with forces that sound like they came from the twilight zone. When my wife, Nancy, had a scan known as a Spect last fall, for what seems to have been a false alarm, she had to be injected with a radioactive tracer. That meant she had to sleep in another room for a couple of days and was forbidden to hug our daughter.

The “P” in PET scan, after all, stands for positron, as in the particles that are opposites to the friendly workhorse, the electron, which is to say antimatter, the weird stuff of science-fiction dreams.

I don’t know if anyone ever asked Paul Dirac, the British physicist who predicted the existence of antimatter, whether it would ever be good for anything. Some people are now saying that the overuse of scanning devices has helped bankrupt the health care system. Indeed, when I saw the bill for Nancy’s scan, I almost fainted, but when I saw how little of it we ourselves had to pay, I felt like ordering up Champagne.

But better medical devices are not why we build these machines that eat a small city’s worth of electricity to bang together protons and recreate the fires of the Big Bang. Better diagnoses are not why young scientists spend the best years of their lives welding and soldering and pulling cable through underground caverns inside detectors the size of New York apartment buildings to capture and record those holy fires.

They want to know where we all came from, and so do I. In a drawer at home I have a family tree my brother made as a school project long ago tracing our ancestry back several hundred years in Norway, but it’s not enough. Whatever happened in the Big Bang, whatever laws are briefly reincarnated in the unholy proton fires at CERN, not only made galaxies and planets possible, but it also made us possible. How atoms could achieve such a thing is a story mostly untold but worth revering. The Earth’s biosphere is the most complicated manifestation of the laws of nature that we know of.

Like an only child dreaming of lost siblings, we dream of finding other Earths, other creatures and civilizations out in space, or even other universes. We all want to find out that we are cosmic Anastasias and that there is a secret that connects us, that lays bare the essential unity of physical phenomena.

And so we try, sometimes against great odds. The year that is now ending began with some areas of science in ruins. One section of the Large Hadron Collider looked like a train wreck with several-ton magnets lying about smashed after an electrical connection between them vaporized only nine days off a showy inauguration.

The Hubble Space Telescope was limping about in orbit with only one of its cameras working.

But here is the scorecard at the end of the year: in December, the newly refurbished collider produced a million proton collisions, including 50,000 at the record energy of 1.2 trillion electron volts per proton, before going silent for the holidays. CERN is on track to run it next year at three times that energy.

The Hubble telescope, after one last astronaut servicing visit, reached to within spitting distance of the Big Bang and recorded images of the most distant galaxies yet observed, which existed some 600 million or 700 million years after the putative beginning of time

Not to mention the rapidly expanding universe of extrasolar planets. In my view from the cosmic bleachers, the pot is bubbling for discovery. We all got a hint of just how crazy that might be in the new age of the Internet on Dec. 17, when physicists around the world found themselves glued to a Webcast of the results from an experiment called the Cryogenic Dark Matter Search. Rumors had swept the blogs and other outposts of scientific commentary that the experimenters were going to announce that they had finally detected the ethereal and mysterious dark matter particles, which, astronomers say, make up a quarter of the universe.

In the end, the result was frustratingly vague and inconclusive.

“We want it to be true — we so want to have a clue about dark matter,” Maria Spiropulu, a Caltech physicist working at CERN wrote to me the night of the Webcast.

“And it is not easy,” Dr. Spiropulu said. “The experiments are not easy and the analysis is not easy. This is a tough, tough ride over all.”

Although we might well solve part of the dark matter conundrum in the coming years, the larger mystery winds out in front of us like a train snaking into the fog.

We may never know where we came from. We will probably never find that cosmic connection to our lost royalty. Someday I will visit Norway and look up those ancestors. They died not knowing the fate of the universe, and so will I, but maybe that’s all right.

Steven Weinberg, a University of Texas physicist and Nobel Prize winner, once wrote in his 1977 book “The First Three Minutes”: “The more the universe seems comprehensible, the more it also seems pointless.” Dr. Weinberg has been explaining that statement ever since. He went on to say that it is by how we live and love and, yes, do science, that the universe warms up and acquires meaning.

As the dark matter fever was rising a few weeks ago, I called Vera Rubin, the astronomer at the department of terrestrial magnetism of the Carnegie Institution of Washington, who helped make dark matter a cosmic issue by showing that galaxies rotate too fast for the gravity of their luminous components to keep them together.

But Dr. Rubin, who likes to stick to the facts, refused to be excited. “I don’t know if we have dark matter or have to nudge Newton’s Laws or what.