A perspective...Natalie Angier on Vasily Kandinsky 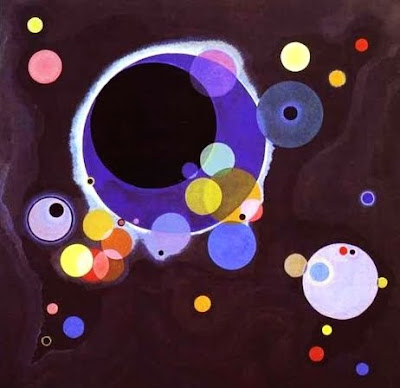 1926
"The Circular Logic of the Universe"

The New York Times
CIRCLING my way not long ago through the Vasily Kandinsky show now on display in the suitably spiral setting of the Guggenheim Museum, I came to one of the Russian master’s most illustrious, if misleadingly named, paintings: “Several Circles.”

Those “several” circles, I saw, were more like three dozen, and every one of them seemed to be rising from the canvas, buoyed by the shrewdly exuberant juxtapositioning of their different colors, sizes and apparent translucencies. I learned that, at around the time Kandinsky painted the work, in 1926, he had begun collecting scientific encyclopedias and journals; and as I stared at the canvas, a big, stupid smile plastered on my face, I thought of yeast cells budding, or a haloed blue sun and its candied satellite crew, or life itself escaping the careless primordial stew.

I also learned of Kandinsky’s growing love affair with the circle. The circle, he wrote, is “the most modest form, but asserts itself unconditionally.” It is “simultaneously stable and unstable,” “loud and soft,” “a single tension that carries countless tensions within it.” Kandinsky loved the circle so much that it finally supplanted in his visual imagination the primacy long claimed by an emblem of his Russian boyhood, the horse.

Quirkily enough, the artist’s life followed a circular form: He was born in December 1866, and he died the same month in 1944. This being December, I’d like to honor Kandinsky through his favorite geometry, by celebrating the circle and giving a cheer for the sphere. Life as we know it must be lived in the round, and the natural world abounds in circular objects at every scale we can scan. Let a heavenly body get big enough for gravity to weigh in, and you will have yourself a ball. Stars are giant, usually symmetrical balls of radiant gas, while the definition of both a planet like Jupiter and a plutoid like Pluto is a celestial object orbiting a star that is itself massive enough to be largely round.

On a more down-to-earth level, eyeballs live up to their name by being as round as marbles, and, like Jonathan Swift’s ditty about fleas upon fleas, those soulful orbs are inscribed with circular irises that in turn are pierced by circular pupils. Or think of the curved human breast and its bull’s-eye areola and nipple.

Our eggs and those of many other species are not egg-shaped at all but spherical, and when you see human eggs under a microscope they look like tranquil suns with Kandinsky coronas behind them. Raindrops start life in the clouds not with the pear-shaped contours of a cartoon teardrop, but as liquid globes, aggregates of water molecules that have condensed around specks of dust or salt and then mutually clung themselves into the rounded path of least resistance. Only as the raindrops fall do they lose their symmetry, their bottoms often flattening out while their tops stay rounded, a shape some have likened to a hamburger bun.

Sometimes roundness is purely a matter of physics. “The shape of any object represents the balance of two opposing forces,” explained Larry S. Liebovitch of the Center for Complex Systems and Brain Sciences at Florida Atlantic University. “You get things that are round when those forces are isotropic, that is, felt equally in all directions.”

In a star, gravity is pulling the mass of gas inward toward a central point, while pressure is pushing the gas outward, and the two competing forces reach a dynamic détente — “simultaneously stable and unstable,” you might say — in the form of a sphere. For a planet like Earth, gravity tugs the mostly molten rock in toward the core, but the rocks and their hostile electrons push back with equal vehemence. Plutoids are also sufficiently massive for gravity to overcome the stubbornness of rock and smooth out their personal lumps, although they may not be the gravitationally dominant bodies in their neighborhood

In precipitating clouds, water droplets are exceptionally sticky, as the lightly positive end of one water molecule seeks the lightly negative end of another. But, again, mutually hostile electrons put a limit on molecular intimacy, and the compromise conformation is shaped like a ball. “A sphere is the most compact way for an object to form itself,” said Denis Dutton, an evolutionary theorist at the University of Canterbury in New Zealand.

A sphere is also tough. For a given surface area, it’s stronger than virtually any other shape. If you want to make a secure container using the least amount of material, Dr. Liebovitch said, make that container round. “That’s why, when you cook a frankfurter, it always splits in the long direction,” he said, rather than along its circumference. The curved part has the tensile strength of a sphere, the long axis that of a rectangle: no contest.

The reliability of bubble wrap may help explain some of the round objects found among the living, where the shapes of body parts are assumed to have some relation to their purpose. Eggs are a valuable commodity in nature, and if a round package is the safest option, by all means, make them caviar round. Among many birds, of course, eggs are oval rather than round, a trait that biologists attribute to both the arduous passage the egg makes through the avian oviduct, and the fact that oval eggs roll in a circle rather than a straight line and thus are less likely to fall out of a nest.

Yet scientists admit that they don’t always understand the evolutionary pressures that sculpture a given carbon-based shape.

While studying the cornea at Columbia University College of Physicians and Surgeons, Dr. Liebovitch became curious about why eyeballs are round. “It seemed like their most salient feature,” he said. He explored the options. To aid in focusing? But only a small region of the retina is involved in focusing, he said, and the whole spherical casing seems superfluous to the optical needs of that foveal patch. To enable the eye to roll easily in the socket and dart this way and that? But birds and other animals with fixed eyes still have bulging round eyeballs. “It’s not really clear what the reason is,” he said.

And for speculative verve, nothing beats the assortment of hypotheses that have been put forth to explain the roundness of the human female breast. It’s a buttock mimic. It’s a convenient place to store fat for hard times. It’s a fertility signal, a youth signal, a health signal, a wealth symbol. Large breasts emphasize the woman’s comparatively small waist, which is really what men are interested in. As for me, I’m waiting for somebody to explain why a man’s well-developed bicep looks like a wandering breast.

Whatever the prompt, our round eyes are drawn to round things. Jeremy M. Wolfe of Harvard Medical School and his colleagues found that curvature was a basic feature we used while making a visual search. Maybe we are looking for faces, a new chance to schmooze.

Studying rhesus monkeys, Doris Tsao of the California Institute of Technology and her colleagues identified a set of brain cells that responded strongly to images of faces, monkey and otherwise. The only other sort of visual stimulus that aroused those face tracing neurons, Dr. Tsao said, were round objects — clocks, apples and the like. She suspects the results would be similar for humans. We make a fetish of faces. “If you have a round object with two spots in the middle,” she said, “that instantly attracts your attention.”

Or maybe the circle beckons not for its resemblance to human face but as a mark of human art. Dr. Dutton, author of “The Art Instinct,” pointed out that perfect shapes were exceedingly rare in nature. “Take a look at a billiard ball,” he said. “It’s impossible to imagine that nature threw that one up.” We are predisposed to recognize “human artifacture,” he said, and roundness can be a mark of our handiwork. When nature does play the meticulous Michelangelo, we are astonished.

“People come to see the Moeraki boulders of New Zealand,” he said, “and ooh and aah because they’re so amazingly spherical.”

Artists in turn have used the circle as shorthand for the divine: in mandalas, rose windows, the lotus pad of the Buddha, the halos of Christian saints. For Kandinsky, said Tracey Bashkoff, who curated the Guggenheim exhibition, the circle was part of a “cosmic language” and a link to a grander, more spiritual plane. A round of applause! We’ve looped back to Kandinsky again.
Posted by Mercury at 6:23 PM