Cold nights and a book

Most of us are freezing now save those citizens in San Diego and when the sun sets, it is even colder. Good time to roast some chestnuts or read a book. Here is one I am currently reading... 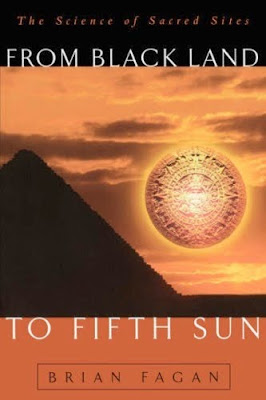 From Black Land to Fifth Sun: The Science of Sacred Sites

PREFACE
THE ARCHAEOLOGY OF THE INTANGIBLE
DARK CAVES, OBSCURE VISIONS
SAN ARTISTS IN SOUTHERN AFRICA
FERTILITY AND DEATH
POWER AND THE ANCESTORS
AVEBURY: LANDSCAPES OF THE ANCESTORS
STONEHENGE AND THE IDEA OF TIME
TWO LIVINGS: AGRICULTURE AND REUGION
THE MOUNDBUILDERS OF EASTERN NORTH AMERICA
THE BULL BENEATH THE EARTH
A SHRINE AT PHYLAKOPI
DIVINE KINGS ALONG THE NILE
XUNANTUNICH: "THE MAIDEN OF THE ROCK"
THE WORLD OF THE FIFTH SUN
EPILOGUE
GUIDE TO FURTHER READING
REFERENCES
INDEX

In Time Detectives (1994), archaeologist Fagan recounted the revolutionary effect of carbon-dating techniques on the practice of archaeology. Here he discusses the challenge of establishing a creditable methodology for creating an "archaeology of the mind." Fagan studies the silent and weathered remains of sacred sites to discern not only the nature of the rituals performed there but also the cosmologies that inspired them, believing that archaeologists can, and should, use the material to illuminate the spiritual. In highly instructive yet engagingly anecdotal accounts of his sojourns at major sacred sites, including the art-laced Cro-Magnon caves of France, the San paintings of southern Africa, the megaliths and stone circles of Europe, and the earthworks of North America, Fagan explains how the chemistry of pigments or food remains, the molecular structure of obsidian, or the dating of tree rings can be used to make ancient iconography and shamanistic practices come alive. Ultimately, his chronicling of the evolution of our interpretations of the significance of ancient sacred sites demonstrates how integral a role technology has played in both religion and science.
Posted by Mercury at 12:36 PM